kanjisheik
Posts: 1887
Joined: July 2010
Location: New Delhi, India
Contact:
Contact kanjisheik
Website
The Stand is a post-apocalyptic horror/fantasy novel by American author Stephen King. It demonstrates the scenario in his earlier short story, Night Surf. The novel was originally published in 1978 and was later re-released in 1990 as The Stand: The Complete & Uncut Edition - King restored some text originally cut for brevity, added and revised sections, changed the setting of the story from 1980 (which in turn was changed to 1985 for the original paperback release in 1980) to 1990, and updated a few pop culture references accordingly. The Stand was nominated for the World Fantasy Award for Best Novel in 1979, and was adapted into both a television miniseries for ABC and a graphic novel published by Marvel Comics. 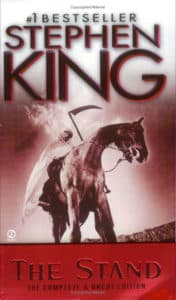 Warner Bros. is currently finalizing deals for director David Yates and screenwriter Steve Kloves to reunite for a multi-film adaptation of Stephen King's novel The Stand. Since the book was beefy enough to fill a six hour ABC miniseries back in the 90s, then there's plenty of material for two, maybe even three movies to come from the 1978 apocalyptic sci-fi story.

Here's the official synopsis of Stephen King's The Stand for those who haven't read the book:


This is the way the world ends: with a nanosecond of computer error in a Defense Department laboratory and a million casual contacts that form the links in a chain letter of death. And here is the bleak new world of the day after: a world stripped of its institutions and emptied of 99 percent of its people. A world in which a handful of panicky survivors choose sides — or are chosen. A world in which good rides on the frail shoulders of the 108-year-old Mother Abigail — and the worst nightmares of evil are embodied in a man with a lethal smile and unspeakable powers: Randall Flagg, the dark man.

Posts: 19535
Joined: June 2010
Location: The White City
Contact:
Contact Vader182
Website AOL
I've heard great things about this from a great many people and I'm thrilled these two are bringing it to the screen, can't wait.

King previously expressed his skepticism about the idea of The Stand working as a feature film, but the indication is that Warner Bros. hopes to cover the story over the course of at least two, hopefully three, separate movies. A trilogy seems likes the most obvious fit, seeing how King’s original novel is even divided up into three sections or “shorter books.”

The first portion of The Stand chronicles the emergence of a human-devised superflu virus referred to as either “Project Blue” or “Captain Trips” and the subsequent breakdown of human society worldwide – something that occurs largely off-screen in most post-apocalyptic thrillers (see: 28 Days Later, I Am Legend, etc). The second section of the novel follows various groups of human survivors as they rally around two different figures, in the form of the kindly Abagail Freemantle and a wicked supernatural being called Randall Flaggs. Naturally, in the third section of The Stand, the two camps clash in the “ultimate” battle of good vs. evil.

With Universal having recently canceled its ambitious adaptation of King’s Dark Tower series, there is good reason to wonder if Warner Bros. is really prepared to commit to a three-movie take on The Stand. However, the latter isn’t nearly as major an undertaking as the Dark Tower project, which was attempting to tie in both multiple film and TV adaptations of King’s source material.

oracle86
Posts: 6272
Joined: December 2010
Location: Space Truckin'
Contact:
Contact oracle86
Website
Wow. They are really gonna do this? Well, good luck to them. Having said that, it is a much easier project to adapt than The Dark Tower, which was probably doomed from the start [movie trilogy plus tv show - what on Earth were they thinking???

Who will they cast as Randall Flagg???

Warner Bros has chosen Ben Affleck to adapt and direct The Stand, Stephen King’s apocalyptic mammoth book. Affleck has become a cornerstone director for the studio, but this would be his greatest challenge yet. Even King has been reticent about the idea of making a feature of his book, which previously was turned into a miniseries. With The Town and Gone Baby Gone, Affleck has shown the grit necessary to handle such an unforgettable tale. It’s early days, but the studio loves Affleck, who’s now directing Argo.

This is fascinating to say the least.

Vader182 wrote:Is this a joke?

TalkOnCorners
Posts: 3169
Joined: March 2011
Damn. I knew the Yates rumor was too good to be true. I'll give Ben a chance to direct this but big NO to him starring as Stu.

CaliKid329
Posts: 4533
Joined: June 2011
Location: Lost Angeles
Affleck the director is fantastic. He's found his true talent. He was great in the Town but I don't know if he'll be as good in Argo. He played himself in the Town so we'll see what happens in Argo.
Mason
Posts: 18329
Joined: February 2011
Affleck is a solid director, don't deny it.
Post Reply
97 posts