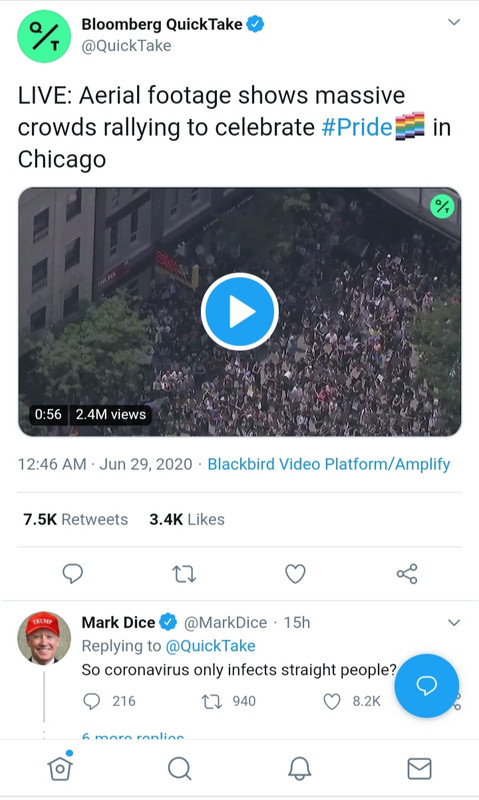 I am tired seeing global news and see all double standard media narrative..i live in UAE and i am grateful not seeing that hypocrasy in my country

I believe it was a march not organized by the city. It was a protest.

That's great news, got a source?

That's great news, got a source?

It's from an insider on Weibo, a Chinese social media website. He has a good record of credibility.

Jesus of Suburbia
Posts: 1179
Joined: May 2010
Location: in a dream
With numbers increase And states like Florida, Texas, and California starting to roll back on things being opened. I feel like Tenet is going to get push back again
shadmag
Posts: 22
Joined: December 2019

DylanHoang wrote: ↑
June 27th, 2020, 3:02 pm
The only time any version of full IMAX has been released was the specific scenes shot in that format for The Dark Knight and The Dark Knight Rises. The full 1.43:1 scenes were included as special features on the trilogy collector's edition. But it's not feasible to release entire features in that format because no home products are capable of displaying those versions without side-letterboxing. A theatre auditorium specifically for IMAX70MM film projection is best for that format.

But the blu-ray releases are the only ways to view the films in 1.90:1, the cropped IMAX format, basically what you get in a digital LIE-MAX auditorium. His films are always cropped to 2.40:1 on digital releases.

Not to derail this thread again, but I really was enjoying reading the sidebar. A point of correction is that the BR release is better than LieMAX ratio wise. 16:9 provides more vertical than the 1.90 of LieMAX (1.77). Even so, I have a 16:10 monitor so the extra vertical always taunts me with black bars.

My guess is it moves to October as well, then every movie moves to 2021 due to actual second wave and still no mass produced vaccine.
"Just a girl. Not a threat."
Post Reply
1400 posts