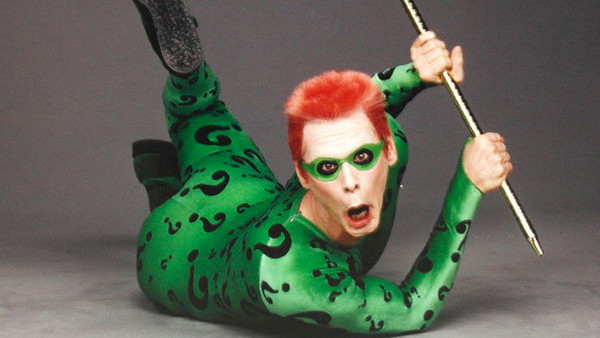 I know I'll one day try to watch Batman Forever again, like, maybe I'll do a marathon before this comes out but that means I have to watch that movie and Batman & Robin too lol

edit: also jesus lol that pic of Carrey
radewart
Posts: 1193
Joined: January 2013
"Batman Forever" skates by because everyone concentrates their hate on "Batman and Robin", but it's pretty terrible. Carrey and Tommy Lee Jones are awful in it and from the start Kilmer seems bored in the role.

Looking forward to finally a new take on the Riddler who can be an interesting villain in some of the comics and animated stuff.

Really wanted Max Richter on this instead

Master Virgo
Posts: 13003
Joined: February 2011
Would be the third composer to have written music for both Batman and Spider-Man.

Allstar
Posts: 42766
Joined: May 2010
His score for War of Apes was completely brilliant so totally happy with this.
taopaipai
Posts: 172
Joined: July 2011
Batman Forever succeeds as a memorable summer blockbuster in spite of the questionable acting. It clicks in all the ways Batman & Robin doesn't. The score is great and the action is well done. One thing about the Schumacher films is that they get closer to the heart of what Batman is all about, an improvement over the Burton films.

That's exactly what I was thinking. Maybe they will take some cues from that film.

Really wanted Max Richter on this instead

I really don't like Giacchino's Spider-Man work, nor his Rogue One score. His pixar work on the other hand, is fantastic. So I'm a bit in between lol

Master Virgo
Posts: 13003
Joined: February 2011
His work for Marvel is mostly above average at best, he ripped off his own Trek music for Strange, his themes for Spidey and Vulture are okish...maybe, nothing to write home about really, BUT his Mysterio theme was really really good, I dig that one.

Nomis
Posts: 18860
Joined: June 2012
Location: stuck in 2020
Frankly I don't even remember the score of Doctor Strange so I have no idea what he ripped off of lol

I remember liking the score of M:I Ghost Protocol and Super 8 too. I didn't know he scored those as well
Post Reply
1843 posts