The upcoming epic thriller based on J. Robert Oppenheimer, the enigmatic man who must risk destroying the world in order to save it.
Post Reply
1036 posts
radewart
Posts: 1334
Joined: January 2013
I haven't finished the book, yet. But so far I don't know of any parts of Oppenheimer's life where he would be interacting with "gorgeous starlets" or "handsome actors"??

DHOPW42
Posts: 3224
Joined: January 2009
Contact:
Contact DHOPW42
Website Twitter
I don't think those are all character types, I haven't seen many casting calls, but I'm sure it's a generic way of saying that if you look nice, it's an advantage

radewart wrote: ↑
January 25th, 2022, 3:47 pm
I haven't finished the book, yet. But so far I don't know of any parts of Oppenheimer's life where he would be interacting with "gorgeous starlets" or "handsome actors"??

Could be a minor scene (or scenes) that Oppenheimer won’t even be involved in, or a different character subplot.

Oku
Posts: 3645
Joined: May 2012
So I just saw Munich: The Edge of War (2021), and I couldn't help but compare it with Oppenheimer, seeing as how they are both prestige historical dramas set around WW2 focusing on white men doing important things.

It made me realize that the deal that Mr. Nolan squeezed out of Universal is even more insane than it already was, seeing as how at the commercial pitch level, Munich and Oppenheimer are pretty much identical, and yet, one has been dumped onto Netflix with barely any fanfare (I couldn't even find any discussion threads for this movie anywhere that I've seen), while Oppenheimer will be getting an extremely long theatrically exclusive release (and probably hundreds of discussion threads on every movie discussion site).

While I had scoffed at that Variety or whatever article that posited that Oppenheimer could be the last of its kind, I am now wondering if it may actually be, in terms of theatrical releases.

As for the film itself (Munich), it's quite well-made and sobering, although it starts off with a first act that stumbles into standard, well-trodden prestige drama cliches territory too often. At this point, I was quite bored and all but ready to write it off as another forgettable Wikipedia-article-turned-movie.

But then you see more and more of Mr. Chamberlain and it's a fascinating, rehabilitative look into a man that has been universally derided as a spineless coward. The film is especially admirable in the way that it focuses solely on Mr. Chamberlain's endeavors and never mentions or hints at Mr. Churchill even once. It's a Dunkirk-level subversion (i.e. never showing the Germans until the end) and a welcome inversion of the exhausting Churchill over-exposure that we've gotten recently.

There's also an amazing scene midway through the film that gives you a glimpse into how the German people could have been seduced by such an evil man, and you can't help but draw parallels between what's being said on screen and Mr. Trump. It's all quite sobering, and in that scene and in one later connected scene, the film does an excellent job of alluding to the horrors of the regime without ever showing them directly, which makes it terrifying in a way that's different, say, Holocaust movies.

It's like Dunkirk being PG-13 and bloodless vs. Saving Private Ryan bombarding you with the blood and guts. I'm still shaking over how the film (Munich) made me really feel how the persecuted must have felt in that period, even though again, the film never directly shows any of said horrors. Sometimes, less truly is more, and films like Dunkirk and Munich are great examples of that.

I also adored that the German segments are actually German actors speaking German, with nice touches like: when characters speak in German, there's an actual translator in-universe translating their bits to English. It's not the usual utterly ridiculous Hollywood bit where characters speak English in German accents and somehow we're just supposed to accept that they're speaking German.

It made me sad that a historical drama/biopic this competent and well-made could just be unceremoniously dumped onto Netflix. But it also made me wonder, what on earth could Mr. Nolan possibly have up his sleeve for Oppenheimer to justify the insane deal that he got out of Universal? 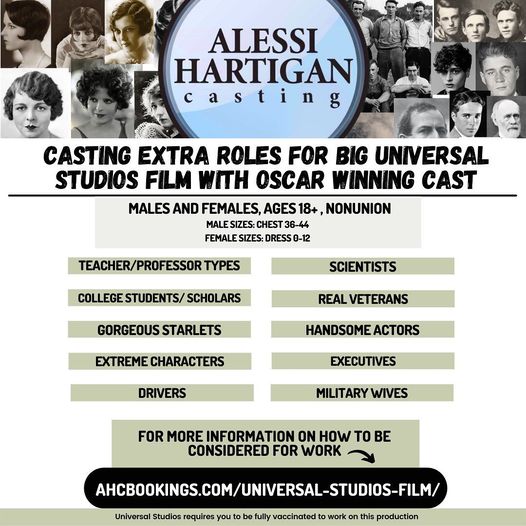 Sande Alessi Casting also posted this. I'm not 100% certain, but it looks like Cillian? 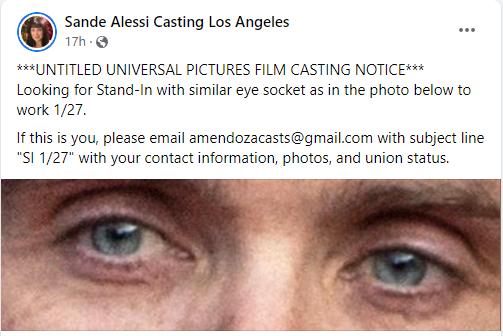 This link has actual pictures of the items or similar items that were purchased. Exciting stuff....not really

Sande Alessi Casting also posted this. I'm not 100% certain, but it looks like Cillian?

I gave this information to my roommate.


Is Chris Nolan going to enjoy Universal? You and Jordan Peele seem to be quite happy there.

Definitely, definitely. I conveyed how much I feel about Universal’s commitment to original storytelling and the movie theaters. And in an age where everybody is trying to sell the narrative that original movies and movie theaters are dying out, I don’t believe that at all! Not even a little bit. And Universal has doubled down — and continues to double down — that it’s their identity. So I’m hoping Jordan, Chris, myself and anybody else that will come over, or at other studios, can prove that everyone wants to see fresh, original ideas in a movie theater.

https://www.hollywoodreporter.com/tv/tv ... 235081736/
Retskrad
Posts: 63
Joined: September 2020
I think Tenet made so many people retroactively go back and wonder if Nolan really is a great director. Nothing in that film worked. It was all a jumbled mess. Oppenheimer needs to be more than amazing for people to have any faith in him as a director again. Nolan stans will of course eat up whatever he’s selling and say Yum.
Post Reply
1036 posts