prince0gotham wrote:Almost done with my grounded playthrough. Fuck this game and its monumental glory

Nice! Once you find the cheese spots it's (almost) a breeze... and yeah it glues onto your brain and never leaves, never. Every time that epilogue ends and the first note starts my mind is utterly blown by the whole thing all over again.

Can TLOU team do something similar within different genre in March 2016?

prince0gotham
Posts: 15510
Joined: June 2010
Location: You're pretty good.
Books can be writen about this damn thing. It commands such reverence. Can't figure out whether I love this more or RDR. Dunmattertho.


The playlist of that guy suggested that there were supposed to be 15 videos and not just 8. I hope he finishes the rest or reuploads them in case they were taken down or something. I wish he said something about the DLC though and the paralels between Joel and that girl as these active devices for the "loss of innocense" trope.

m4st4
Posts: 55632
Joined: May 2010
Location: Arrakis
I cannot wait for that moment when they release a teaser and by the end of it you realize it's older Ellie and she's looking almost photoreal. I know this is a perfect circle but sequel is a given thing.

prince0gotham wrote:Books can be writen about this damn thing. It commands such reverence. Can't figure out whether I love this more or RDR. Dunmattertho.


The playlist of that guy suggested that there were supposed to be 15 videos and not just 8. I hope he finishes the rest or reuploads them in case they were taken down or something. I wish he said something about the DLC though and the paralels between Joel and that girl as these active devices for the "loss of innocense" trope.

JohnConstantine
Posts: 4377
Joined: June 2011
Location: Romania
Ok, after almost 2 years I have replayed TLOU on Normal + (played it on Normal the first time), and then played Left Behind on Hard (got all the trophies, which is not something hard to do). Then some multiplayer (it's fun but nothing to keep me glued to it like Battlefield). After all these years there are still people in mp on ps3

Now I have to play those chapters in TLOU where I haven't picked all the collectibles. And then... well, at some point I'll replay it on a harder difficulty. I wanted to play it on hard (and so on), but I don't have the patience, so maybe I'll skip to survivor or even grounded. I don't think I can replay it more than once, so maybe I'll go straight to grounded

While I replayed it (and played LB) i remembered why I enjoyed playing with Ellie so much. Just Ellie and the bow. If I had only a game with the same length as TLOU only with her, I'll play the shit out of it

Or if I had the bow from the start with enough arrows. Only the bow

I haven't played many games with bows (TLOU, FC 3 and Tomb Raider) but in this game it is the most satisfying. Not only the vibration and the aim, but the sound it makes when releasing the arrow and hitting a human/"zombie" enemy. That with the stealth is priceless (for everything else you have MarsterCard).

ps: while I was kinda picky at first (searching to see if the graphics held up), once getting back in the game after a few hours, I can say that this game looks great (for its age), even on PS3

ps2: maybe I have to satisfy my Ellie/bow fix with only the Enemy of my enemy chapter in LB 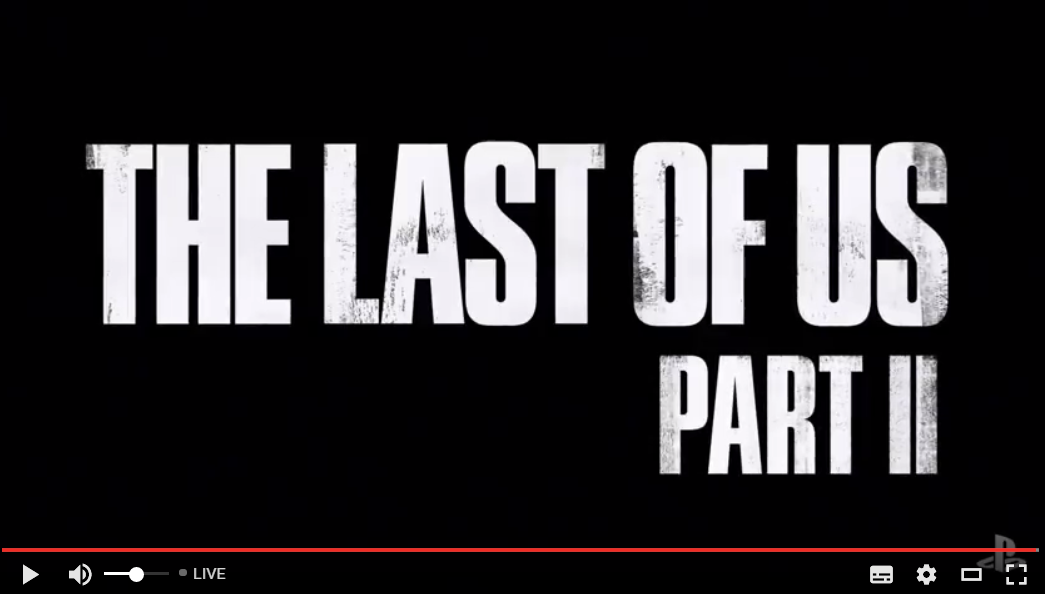 
-Updated engine on PS4
-Ellie and Joel are back
-early development

-Ellie and Joel are back

-Ellie and Joel are back

Would literally be my face if it was a teaser about brand new characters that I don't know and love yet.

All I ever wanted was a 16-something Ellie playing a guitar... Joel, not so much, but whatever he'll probably die. Also, role reversal: playable Ellie with Joel helping out?


I can’t tell you how satisfying it is to finally be able to say that Ellie and Joel are back for another intense, harrowing, and emotional adventure. Like many of you, we have a deep love for the world of The Last of Us and its characters, and while a sequel may have seemed like a foregone conclusion, that wasn’t the case. We knew that it needed to be a story worth telling and, perhaps more importantly, a story worthy of Joel and Ellie. After spending years on different ideas (and almost giving up), we finally uncovered a story that felt special—a story that evolved into an epic journey.

It’s still early days for the project—the game’s release is a ways off—but we couldn’t wait any longer to give you a glimpse of what’s to come. We’re going to let the trailer (coming soon to this post) speak for itself, but expect more information about The Last of Us Part II in the coming months.

And there will be a panel with Ashley and Troy tomorrow!
Post Reply
909 posts