An original action espionage film releasing in IMAX on August 12, 2020
Post Reply
591 posts
radewart
Posts: 1195
Joined: January 2013
Put me on team Pfister.
KEM
Posts: 527
Joined: December 2019
Well TDK is the greatest movie ever so Pfister gets a lot of points for that but I’m very happy with what Hoyte is accomplishing so I’ll go with him on this one

KEM wrote: ↑
September 10th, 2020, 3:42 pm
Well TDK is the greatest movie ever so Pfister gets a lot of points for that but I’m very happy with what Hoyte is accomplishing so I’ll go with him on this one

He didn't know how to shoot Maggie G. though, who admittedly needs a lot of help. Down points for that, heh.

Sky007
Posts: 2040
Joined: April 2013
Sorta think if Inception was directed like Tenet, and used its more on-the-run, obtuse exposition, it would hands down be Nolan's best movie. I think the writing is slightly better in Inception and it's a more dynamic film, especially in the playfulness of the dialogue, but Tenet is the better directed work. It's also not direct in what it's about like Inception, and why it won't be a hit like Inception. It's closest to The Prestige in that its interests and emotional pull are esoteric, which i think is a bit more interesting.

Law
Posts: 17001
Joined: July 2010
Location: Moonlight Motel
Just saw it for a 2nd time, truly worlds better. I had a much better viewing experience and picked up on so much more. Regarding the above talk, I'm team Pfister as well. Nolan needs to link back up with Pfister and Julyan to maybe take a break from all these major blockbuster movies.

Sky007
Posts: 2040
Joined: April 2013
3rd viewing, what was initially obtuse and bombastic is now a razor sharp interlocking loop of belief -- stylized with a far more kitschy playfulness than I initially thought. The film keeps revealing more insights and emotions (effect before cause), and pulls you in deeper while expanding thematically. Reminded me of Doodlebug a lot this time.
Frankthetank
Posts: 136
Joined: January 2018
Got back from watching it a first time. I will say this..this may not be Nolan’s best objectively, but I will say it’s going to be one I rewatch a lot. Feels like his least excessible yet most fascinating to think about and marvel at how it’s done. I do feel like there is almost an invisible emotional core throughout the movie that kinda sneaks up on you by the end, and I’m sure becomes more apparent on rewatch.

Clowmount
Posts: 33
Joined: December 2016
Funniest part of the movie for me:

ALL I HAVE FOR YOU IS A
gesture.
Nationalcalvin
Posts: 1
Joined: September 2020
I believe the film was intentionally designed to be seen twice. On first viewing, it was initially incomprehensible, but as I thought about it more, some of the pieces began to fall into place.

On my second viewing, it all started to click. The characters that seemed cold on the first viewing had an emotional impact on the second; the character development was back to front. I would consider the end of the film, the halfway point.

This film is destined to be a future classic; I'm awestruck at the brilliance of what he created.

lcbaseball22
Posts: 946
Joined: July 2012
Was just browsing RottenTomatoes user reviews and thought this was sort of amusing; seems like it's quite a love it or hate it film with general audience... 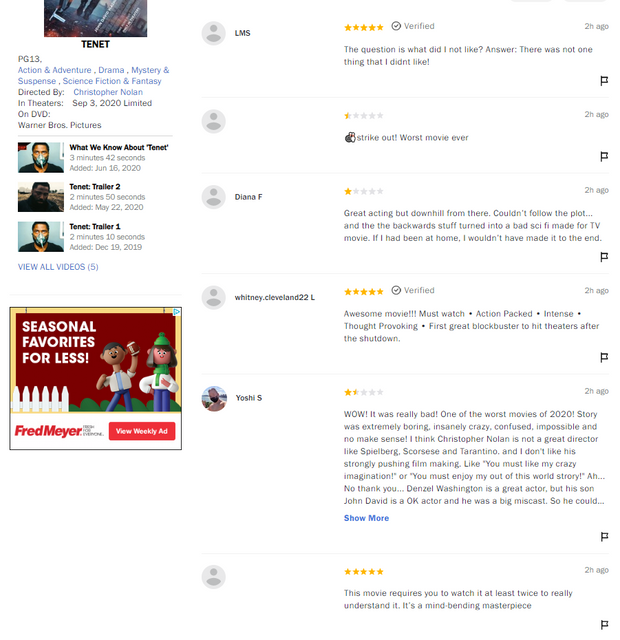