An original action espionage film releasing in IMAX on August 12, 2020
Post Reply
990 posts
radewart
Posts: 1195
Joined: January 2013
Surprised so far that the scores have maintained, though it can certainly change in the coming weeks (months?) of more reviews being added. Reading regular people reviews on social media and this film seems to continue Nolan's trend since Inception of having very polarizing reactions. Though, even alot of the positives for Tenet still have issues with the confounding plot and struggle with the sound mix.
The Special One
Posts: 4039
Joined: June 2010

Was wondering where he's been
ninenin
Posts: 210
Joined: December 2019

DarkChocolateOreo wrote: ↑
August 29th, 2020, 12:48 pm
Its funny how film critics are cool and matter until they give a fans movie a bad score...

Critics wouldnt have jobs if they had no demand. Yes, critique is subjective...so is filmmaking...So is conversation. All critique is is a response. Find a critic you like and stop worrying (so much) about naysayers

Ill also say you can disagree with a specific critic but dont decry the whole prof. I personaly think its weird that some critics push so hard for audiences to consume nonchallenging material, like they have no faith in the audience

No, they never mattered.

ninenin wrote: ↑
August 29th, 2020, 11:45 am
Sorry but I wholeheartedly disagree. When it comes to subjective things like art and cinema, critiques are really useless and truly pretentious. Writing opinion peices as a fan, layman, General audience member is fine but as soon as you try to make a "profession" about it you are trying to raise the importance of your opinion above others... The very definition of pretentiousness. In more objective areas like science, engineering, economics, and law etc. On the other hand It's important to have expert opinions.

big believer people will eventually just tell on themselves 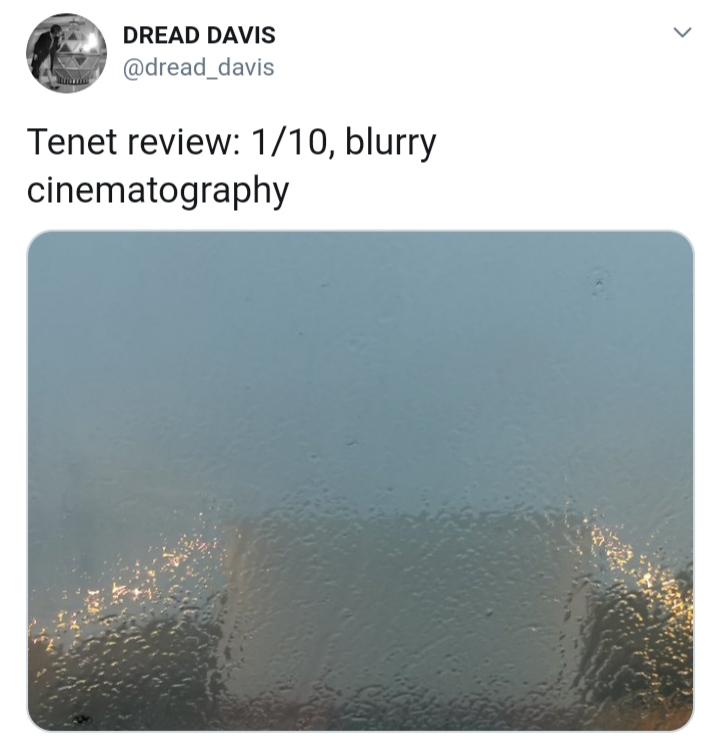 Vader182
Posts: 20086
Joined: June 2010
Location: The White City
Contact:
Contact Vader182
Website AOL
So, this is going to be by far the worst user-rated Nolan movie besides Insomnia and Following. It's already at an 8 on IMDB with 32,000 ratings, and it's just going to (most likely) keep dropping. It's at 3.7 on letterboxd, same as TDKR and only above Following and Insomnia.

I recently reread the Inception shooting script with that interview with Jonah, and they talk at length about how you need a massive emotional stakes and clarity to guide an audience through a movie. It seems for the first time in his career he went too far away from that, seemingly on purpose (?) (haven't seen it yet). I wonder if he'll talk about Tenet through that lens at some point.

Tenet is going to wind up in the mid 7s most likely.


-Vader
Last edited by Vader182 on August 30th, 2020, 3:03 am, edited 2 times in total.
rbej
Posts: 95
Joined: March 2015
User reviews will be big disappointment for Nolan. Not critics but normal people. I'm very curious the next Chris movie after all this. Maybe Tenet is last movie with time manipulation.

rbej wrote: ↑
August 30th, 2020, 2:56 am
User reviews will be big disappointment for Nolan. Not critics but normal people. I'm very curious the next Chris movie after all this. Maybe Tenet is last movie with time manipulation.

people here act like the feedback will make chris reconsider his whole career and go back to making memento 2 or something, time will tell what chris chooses to do next, but its not like this film is the one to topple his career, he hasnt pulled a shamalan on us yet, i also think chris will keep finding new ways of telling stories in a non linear way, whatever the scale he works at, in fact, in the future i do imagine him making smaller and ever more bold films, flexing all of his auteur skills in a completely avant garde way.
Post Reply
990 posts