User of Interest
Posts: 1267
Joined: September 2014
I accidentally typed www.tenetfilm.comn and got this result on Google: 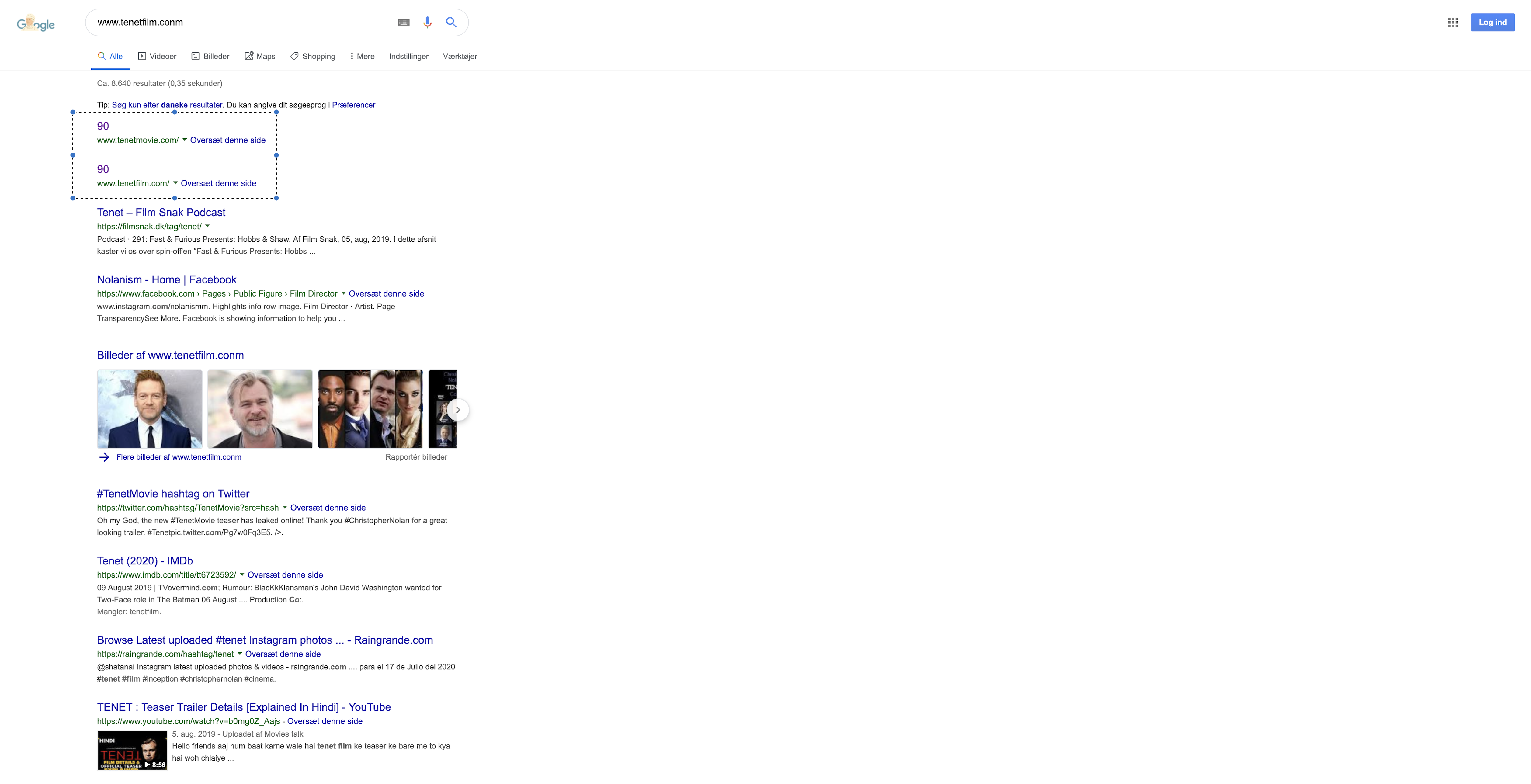 antovolk wrote: ↑
August 15th, 2019, 7:19 am
That and...all indications are, from what I heard myself and what peeps like MyCocaine have been told also, it'll remain cinema exclusive. Now Nolan/WB may change their minds but at the moment no online release appears to be planned.

Now I certainly wouldn't mind, and would admire at least, an offline campaign like this but if the point really is about getting people out, make stuff like trailers actually on display and accessible when the word of mouth is doing its thing. Not weeks later when this is no longer a story. All the big online WOM for this teaser was upon its US drop two weeks ago, aside from my fanboying there's been nothing else on social media from the UK last night...and a couple scattered reactions from France and Germany.

I think you're right on point; I truly believe Nolan is actually fighting the current culture of "gotta have it now"/impatience and the overload of news and hype. So word of mouth would then be built up differently, more organically. Not immediate word of mouth that comes from online, but more old school, gradual word of mouth that actually lasts longer. If that is indeed Nolan's strategy, it will be super interesting to see the effect it will have on the film's box office legs. Nolan's films have traditionally had good box office legs, but if this strategy turns out to be true, then I predict it will make the legs of the film even better, thus giving the film better staying power in theaters.

Oh, but what does it mean though?

Oh, but what does it mean though?

Nothing, Google probably pulling something from the source code as there's no site/page name in it.

Nomis
Posts: 18801
Joined: June 2012
Location: stuck in 2020
I still think it's weird that there is a site online without a trailer to accompany it

blackColumn wrote: ↑
August 13th, 2019, 7:31 am
If it was 'just a teaser for a film' people won't be bootlegging it and youtube won't be actively removing it. Seriously man, you can be arrested at the airport for having a cinema recording of this in any electronic device.

antovolk wrote: ↑
August 14th, 2019, 6:22 pm
A friend on Twitter mentioned this - what if, for experiment's sake, they didn't do *any* online trailers/minimal online marketing for this...

I'm feeling this could actually be very likely. I feel Nolan could be daring enough to do it. It would bring us back to an older, almost more romantic era of films where you could only see film trailers in theaters. I'll go a step further and say there is even a possibility that we might only see posters in theaters and in physical places like bus stops, but not online. I know some people will be upset and will overreact, but I would applaud Nolan's courage if he did that. In current times, that would be very unique. Also way back in the 1980s and 1990s for example, there were a number of movies that had massive anticipation, but the anticipation was built up the old school way, through word of mouth. So I think this wouldn't harm Tenet's anticipation in my opinion. In fact, given the uniqueness of such an approach for current times, I feel it would actually amplify buzz and anticipation. It would be like viral marketing in real life...or as people back in the day called it, pure word of mouth.

If they were to go all out and never release a teaser or trailer online I would REALLY ADMIRE the move and for exact same reasons you have talked about.

However, this is not going to happen. Even if Nolan wanted so, he is still not powerful enough to pull off somerhing of that kind given the budget he was granted for this.

Also, look at Dunkirk. There were so many TV spots and trailers that there was hardly any footage not shown. I don't think Nolan would've wanted it to be like that. But studio execs call the shots (and given the gradually declining BO performance of his films , I would say 'rightly so').
Last edited by blackColumn on August 15th, 2019, 11:35 am, edited 1 time in total.

senseandsarcasm
Posts: 96
Joined: April 2019
WB just doesn't have any really large films out in the next few weeks to even attach the trailer to. I'm happy to hear some people are seeing it with Once Upon a Time in Hollywood.

Hopefully it will be attached to IT: Chapter Two. That's a huge film and a lot of people would at least see the trailer in theaters then.
Post Reply
1584 posts