ANONIMNIQ wrote: ↑
August 2nd, 2019, 12:12 pm
How many of you guys knew that Matt Damon is in Interstellar before seeing the film?

I did. I remember that it was announced in August 13. I was at Lollapalooza seeing the Orwells when I saw the story on one of the trades.

It's too jarring and noticeable to be a sloppy editing mistake.

My thoughts exactly. What is going on there? It’s obviously done on purpose

EDIT: I noticed something else too. After he touches the first bullet hole, he turns and looks at the second bullet hole out of frame. Then after we see ”John David Washington” on the screen he doesn’t look at the hole in the glass anymore, but straight into the distance. They clearly used a different shot.

Taking it even further: I’m fairly confident that the shot before the cut runs forward, but the shot after the cut is in reverse. Watch his eyes!
Last edited by Willem on August 2nd, 2019, 1:28 pm, edited 3 times in total.

Collector03601
Posts: 413
Joined: June 2011
Location: Slovakia
Contact:
Contact Collector03601
Website
While played really slowly and looking at that small “dot” going over the spinning title - could that be a bullet? 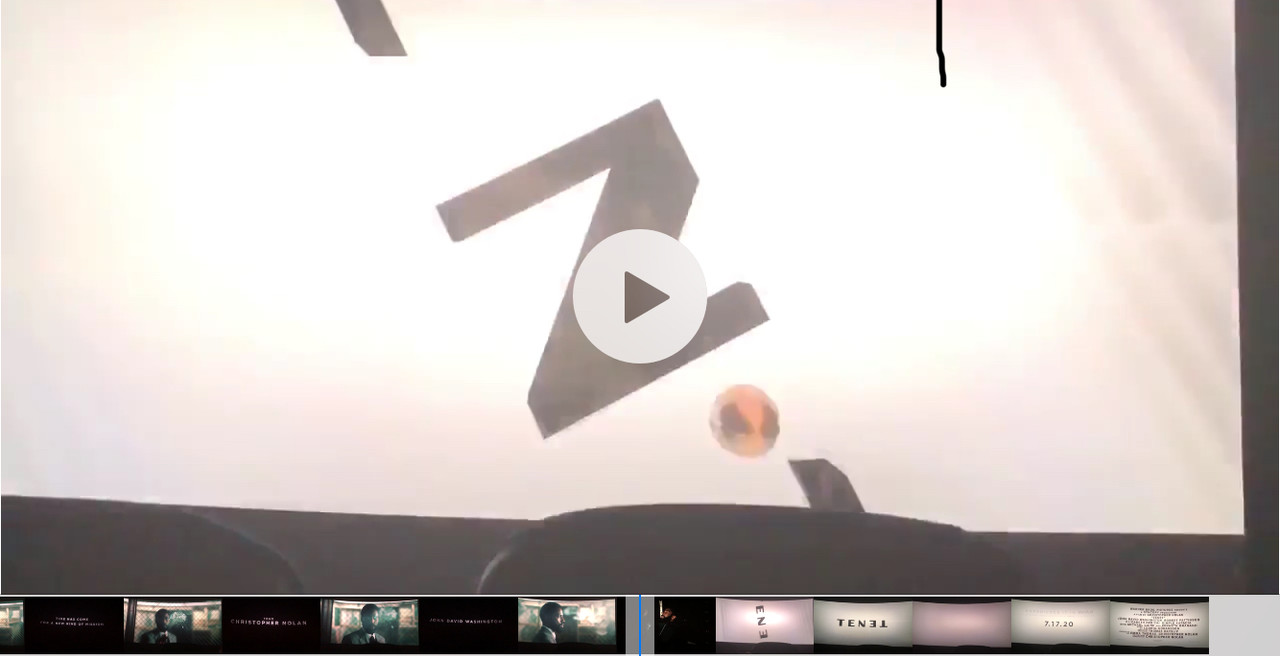 I noticed that too...
Silfan
Posts: 119
Joined: September 2018
the broken glass motive - the screen between the protagonist and the audience?

AhmadAli95
Posts: 2027
Joined: December 2016
I find it interesting how once a bootleg spreads no one else bothers to record it. Like, phones can film in 4K and we get a low quality, low resolution bootleg

Angus wrote: ↑
August 2nd, 2019, 11:05 am
The tagline is just too weird for a Nolan movie without it meaning something significant. Nolan signed off on this; there's no way it's as simple as "Time has come for a new protagonist" in the literal sense.

So I got to thinking: "Protagonist" has another definition not related to heroes and good guys.

an advocate or champion of a particular cause or idea.


I think a protagonist in this film's universe is a "job title." As in, "What do you do for a living?" / "I'm what they call a protagonist."

This seems to feel related to the definition of "Tenet."

a principle or belief, especially one of the main principles of a religion or philosophy.

Great catch, I think you are correct!

My guess is that Nolan will also play with our faith and beliefs as audiences. I feel this will be more complex than any Nolan film before it.

Also based on this incredible teaser, I feel Nolan could go even beyond merely having portions of the film play backwards or forwards. My personal belief is Nolan will go as groundbreaking as having time function differently within the same scene or same environment. For example, in those shots in the teaser, I feel that time could be moving forwards as well as backwards in the same shot, but say certain beings/objects are moving forwards while other beings/objects are moving backwards. In fact, I think that is what may happen in the Estonia highway scenes. Time simultaneously moving forwards and backwards in different portions of the same scene. Time may even stand still, or slow down or speed up on top of acting forwards or backwards in other portions of a single scene. That would be absolutely groundbreaking and frankly incredible to make it work in a film visually and conceptually. I could be totally wrong, but if I'm anywhere close, this makes the structures and concepts of all previous Nolan films look simple in comparison. Also if this is anywhere close to the truth, this would make Tenet Nolan's most courageous film to date in terms of trusting the audience and their ability to understand.
Last edited by Imaginatio on August 2nd, 2019, 1:45 pm, edited 2 times in total.
Nolan62
Posts: 871
Joined: December 2017
"Unreal, massive and innovative"

And we're just in front of a 40 seconds promotional teaser.

WE ARE NOT READY