Vader182
Posts: 19886
Joined: June 2010
Location: The White City
Contact:
Contact Vader182
Website AOL
State officials and advising scientists have openly spoken that reopening plans are primarily built around risk of transmission with how essential the business is as a secondary but not irrelevant concern.

As for restaurants, I can only speak for Illinois, spaced out seating inside restaurants is generally enforced 6-10 feet+ between parties in most establishments. Mayor Lightfoot is doing an okay job fining restaurants who don't. It was dicey at first but significantly improved and hopefully they don't let it get dicey again. And obviously, utensils and plating is washed between uses, the same way theater seating hopefully will be. Indoor dining carries ample risk regardless, and I'm sure in some states / cities it's more of a shit show as Ruth says.

But here's the key point: I agree theaters have far more potential for social distancing and safety, but AMC announced 50% capacity in their theaters. That translates to one seat apart. One seat apart is significantly less than 6 feet apart from total strangers for nearly 3 hours with masks on and off. Bars and nightclubs are about as dangerous as it gets, but I don't want anyone here to downplay just how dicey seeing a movie at a theater, especially AMC, will be.


If you're ordering takeout or eating outside, I'd agree.

Otherwise, assuming people are spaced out as distant in both settings... I'll just agree to disagree.

Respectfully, this isn't correct. For instance, just look at the state reopening plans created by scientists and epidemiologists. In every single one, indoor dining opens way earlier than theaters. In Illinois, for example, indoor dining has been available since end of June. When you break it down, this is fairly common-sense. You spend longer inside a movie theater than most would at restaurants and social distancing is more staggered and spaced out in a restaurant table-to-table.

Meanwhile, most theaters will have one empty seat between parties, IE that's less than 6 feet apart, and various people around you will have masks off a big percentage of the money eating and drinking. It's straightforward theaters are later in reopening plans (IE, deemed more dangerous by scientists) when considering these facts.

I envy your confidence if you believe you have understanding beyond theirs.

Theaters aren't open because they are nonessential. Restaurants aren't essential in and of themselves, but eating is essential whereas entertainment is not. Helping business help people perform an essential task is helpful for the economy.

You're right regarding time: you'll likely spend half the amount of time in a restaurant than you would in a theater. Spacing is an iffy call depending on what theaters do. Those that do 25% capacity are really spacing things out (I'm from an area where theaters are pretty damn big). Ceilings are higher vaulted, theaters will be running filters in their ventilation, and they can assuredly make the place spotless between showings.

The eating/drinking part is where you're missing me here entirely. I'm going to be masked up the entire time. If I want to consume food or a beverage, off it will go momentarily, then back on it will come. I'm not spending time exhaling, coughing, laughing, or talking to others while my mask is off. I'm not facing the opposite direction of somebody else at any time during the screening. Most importantly, since my mask is off for such limited time, I will make an extremely conscious awareness over the fact that I'm just going to be breathing in, or something to that effect. It may be a problem that theaters have escalated seating, but assuming that nobody is in the seat directly in front of you (which I'm sure will be handled), I don't see this being a problem either.

In a restaurant, you're not going to wear masks. You're there to eat, period. You're there with others so you will be socializing. You'll cough, you'll laugh, you'll spit out food. Everyone is facing in different directions. You're interacting with 2-3 employees during your visit who frequent across other employees often and other tables. The transferring of food, water, the sharing of condiments/dispensers, and even your check/credit card are all susceptible to being contracted, and you are likely mask-less the entire time. Ceilings are significantly lower as well. I'll give you that they can probably spread people out more, but the less vulnerable you feel the more you'll likely put your guard down.

Unless we're looking at 50% capacity, I'm just not seeing it. I'm not saying you can't catch anything, but I'm not seeing greater dangers in a movie theater. Maybe it's just me being naive for the sake of wanting to see Tenet. After I see it, maybe I'll say: "Now let's close 'em down!" But if the theaters are restrictive in the right ways and customers follow suit, it can make for fine safe-doings.


Exactly, you are entirely correct. It's for the same reasons that bars are the number one place to pick up the virus. The combination of sharing of utensils and being seated together at a table facing one another without masks, while eating/talking, are the major transmission methods.
Last edited by ninenin on August 13th, 2020, 4:11 pm, edited 1 time in total.

Vader182 wrote: ↑
August 13th, 2020, 4:04 pm
But here's the key point: I agree theaters have far more potential for social distancing and safety, but AMC announced 50% capacity in their theaters. That translates to one seat apart. One seat apart is significantly less than 6 feet apart from total strangers for nearly 3 hours with masks on and off. Bars and nightclubs are about as dangerous as it gets, but I don't want anyone here to downplay just how dicey seeing a movie at a theater, especially AMC, will be.

You're not wrong, this can be a problem. I'm still thinking the aspect of kind of being "silent" during the entire time and only de-masking when necessary for food/beverage consumption will be extremely helpful. I do think theaters will see potential dangers as they practice it in place, though.

Anyone have photos of a theater in Asia showing their social distancing tactics when it's a maximum allowed capacity?

Vader182
Posts: 19886
Joined: June 2010
Location: The White City
Contact:
Contact Vader182
Website AOL
Here's the thing about sitting face to face with someone while dining: you are in control of who you're sitting close to, not the restaurant. You'll know if your friends are gallivanting around or if they've mostly been in a lockdown.

When you're at a movie theater, you have zero control over who sits around you. You could just as easily be sitting a seat away from half a dozen people who haven't left their house in 5 months as an anti-mask lunatic going to bars and restaurants every other night, most of whom will be without a mask a % of the movie.

And PS, enforcing masks during movies will be a shit show. What constitutes a period of "eating and drinking"? If you have a plate of nachos or pizza, your mask could be off for 45 minutes chomping down on and off since you don't want your greasy hands touching your mask. This has already been an issue with popcorn at Chicago's Music Box theater.

antovolk
Posts: 9370
Joined: December 2011
Contact:
Contact antovolk
Website
I think an important aspect is to judge the measures relative to what's the actual state of the pandemic in your area/country. The measures cinemas are taking can afford to be the way they are in eg. Asia, by virtue of the pandemic being more under control and the numbers and the R number being lower. UK exhibitors were looking at Asia, Scandinavia etc and going 'why can't we have 1m too', duh, it's because Boris Johnson fucked this up... In England (Scotland and Wales and Northern Ireland handled this way way better, trying to eliminate and bring the numbers down as low as possible) we now have the '1m+ principle' - social distancing should be 2m but can go down to 1 provided there are mitigating measures such as masks. And yet they have the same eating/drinking exception. While there are still 500+ cases daily (a number Boris Johnson is very willing to accept for the coming months) and the R number above 1.

Shifting gears, guess I got more than I bargained for while pushing for the drive-in stuff...booked for 31st in London (earliest they were showing) but then another one that's a 160 mile round trip announced they're screening from 28th! The things we do for the love of Nolan (and hate of spoilers)

Tarssauce
Posts: 2492
Joined: December 2016
I guess it depends on the seating layout and it differs from country to country and from chain to chain but I felt very safe in my screening today. Also depends on how filled up the theater is. 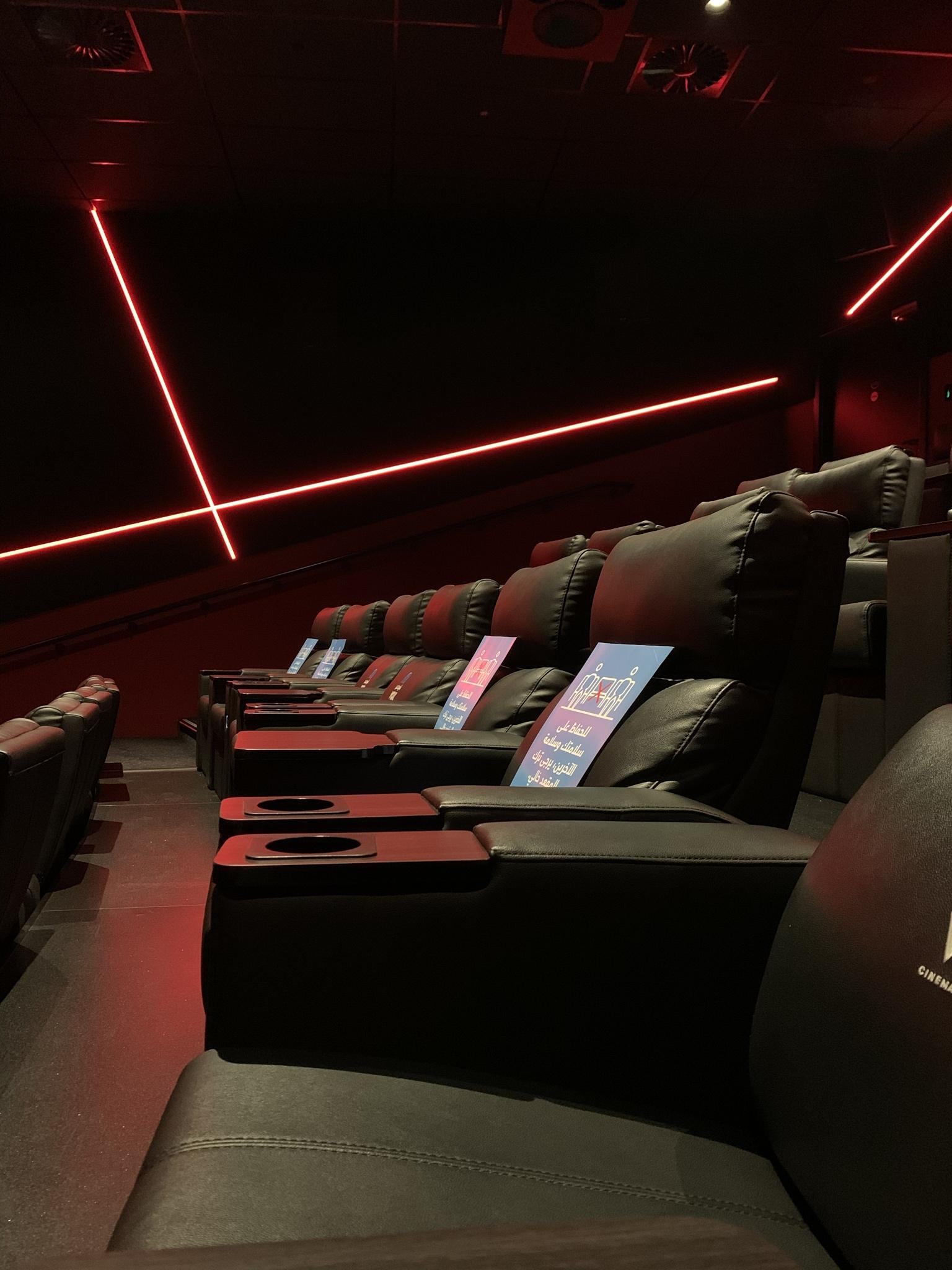 The two seats in front are left empty and so are the two seats in the back.
I actually had dinner at a restaurant later in the day and I genuinely felt less safe there than in a theater. Or when I took my car to a workshop.

But I definitely understand why some of you are worried.

Depends where you're at. Japanese theaters are blocking 3 seats out of 4, meanwhile restaurants or izakayas are literally full of drunk salarymen shouting without masks.

Depends where you're at. Japanese theaters are blocking 3 seats out of 4, meanwhile restaurants or izakayas are literally full of drunk salarymen shouting without masks.