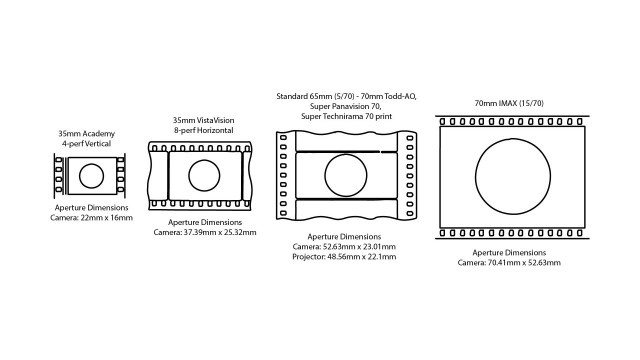 It's a bigger negative than 35mm Academy (4-perf). And what's interesting is that just like IMAX film, it runs horizontally.

VistaVision has an aspect ratio of 1.5:1 compared to 4-perf 35mm 1.4:1 so it's close and not much cropping would be made but yes, given that Nolan like to finish photochemically the film will be blown up otically. Of course, 15-perf 65mm is much bigger than 8-perf 35mm so that gives you more resolution and smaller grain structure.

Two sources close to Warner Bros. confirmed that press screenings will take place for the film, but it will not screen in markets in which theaters are not currently open. For the moment, that means that “Tenet” won’t be shown to press in major markets like New York City or Los Angeles, where both theaters and smaller screening rooms remain closed (...) Given the current release schedule for the film, members of the press in Europe are likely to see it before American journalists.

For the moment, more than 80 percent of U.S. markets can screen “Tenet” on opening day, so the studio is putting its resources into evaluating those options. Only Arizona, California, New Jersey, and New York are currently off the table; that leaves major markets such as Boston, Chicago, and Miami as viable for now.

Sources close to both WB and Nolan say the filmmaker is leaving the screening plan up to the studio, and it’s safe to assume that the studio will not be making digital links available to domestic press.

The studio will adhere to the current safety regulations in place from respective local and state authorities for each screening. Safety is said to be paramount to the studio, given the current state of the world and the ongoing pandemic. Representatives are planning to reach out to individual members of the press to gauge their comfort level with various options before setting official screening dates, times, and locations.

VistaVision for which shots looooool

omg ten minutes, probably only zooms of the IMAX camera while Hoyte and Chris touch it and gaze into the camera

they used the vistavision in inception for anything involving vfx like for the bullet train windows replacements they used used vista plates taken by mounting a vistavision camera on an outside bullet train window some aerial plates over morocco and for the ice fortress miniature explosion shots and concerning 65MM shots you can spot the difference by yourself on the 4K BLU RAY or in IMAX anyway there are the conversation between old saito and cobb in limbo all in 65MM 5P the shot of the penrose steps from above that boom move was on 65mm the shot of the train in los angeles also some vfx shots in paris in the streets not all just few wide ones and the scene between the two fishers in the vault.

to conclude 65MM stuffs were scanned at 6K and downsampled to 4K and filmedout on a 35MM negative to colour corrected with the 35MM anamorphic stuff chemically.

they did the same thing with the VV shots and with the SUPER35MM high speed stuff.

if you have any question about any movie filming or finishing process i'm here anything cameras lenses post production.

intersteIIarx
Posts: 482
Joined: May 2020
Location: Australia
interesting! I'm sure Anton in particular will be very pumped about this

intersteIIarx wrote: ↑
August 5th, 2020, 8:50 pm
interesting! I'm sure Anton in particular will be very pumped about this

Feels totally unsurprising that US drive-ins get it as a few have definitiely been advertising it already, question is about the upstart ones in UK and elsewhere internationally
neb4ever
Posts: 597
Joined: November 2014
Minor TENET spoiler from Fortnite easter egg: A location from the film is now in the game
this is most likely the inversion machine and similar to what JDW was holding on the truck in Estonia and in California. it can be found in an underground section of the nuclear power plant UNIT 4

User of Interest
Posts: 1270
Joined: September 2014
It's unknown whether Denmark will get the 70mm-version in my favorite cinema (Imperial), but there is another place near me that will show it in that format. I want Imperial though and really hoping for it