Plz....plz happen. At this point I'd be satisfied to see Nolan win Best Director.
Also regarding what I said about a week ago. I don't think BR will win Villanueve BD now, though it may net him a nomination. The box office stuff is gonna hurt the film's chances of winning big, though I still see it snagging some big noms and probably winning Best Production Design, Visual Effects, and maybe Cinematography.

The Shape of Water will also get a lot of noms, but I still think the subject matter (woman falls for fish-man) may be a bit too niche to win BP or BD (I think Del Toro may get Screenplay as a consolation).

Janky Sam
Posts: 95
Joined: March 2017
I'm currently predicting Dunkirk to win BP, though I can definitely imagine a scenario where it splits Director/Picture with Three Billboards Outside Ebbing, Missouri (considering its TIFF win). On paper, McDonagh's film looks like an odd choice, but it seems to have a lot of passion from audiences, it's easily a frontrunner for the original screenplay win, and seems to also have the kind of social commentary that will give it the "importance" factor. Plus, I think Frances McDormand and Sam Rockwell are looking like serious threats for winning their respective categories.

The Post could also win BP, but I'm still wondering if it will be too middlebrow or if it will have enough passion, especially with its late release.

The Shape of Water and Darkest Hour aren't winning. The former has the genre stigma against it and the buzz around it had died down since TIFF, and Darkest Hour's reviews aren't good enough.

At this point I think it will be between Dunkirk, Three Billboards, and The Post.

I still really have a gut feeling Dunkirk will win Best Director, Editing, Sound Mixing, and Sound Editing (and maybe Cinematography .... right now I think Deakins is the only competition on that front) and the Academy will do what they have don recently, give a """"""socially important"""""" film Best Picture.

Of course I'd love to be proven wrong, and for Dunkirk to snag BP too, but that's what I feel.

Sanchez
Posts: 2175
Joined: January 2016
Location: Norway
These predictions are lit, and honestly not what I would have expected now after we've learned more about the other movies. Obviously a lot can change, but it looks like Nolan is at least going to get his first nomination for directing and a second for picture. Which is fantastic news and so well deserved for him. 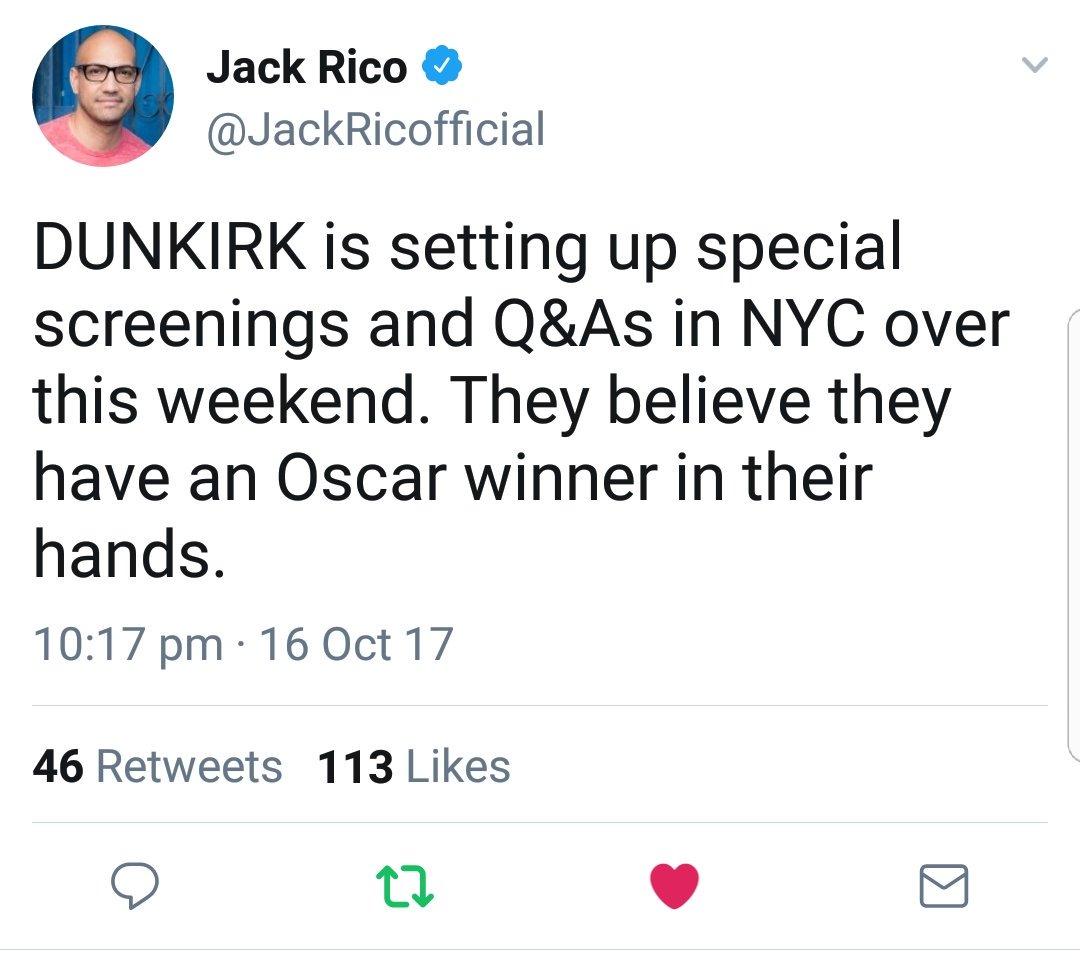 MuffinMcFluffin
Posts: 1279
Joined: May 2017
Location: Elk Grove, CA
^ That seems a bit soon for Oscar buzz, don't it? Half the potential contenders haven't even come out to theaters yet.
Post Reply
1296 posts