KnoxHarrington wrote: ↑
April 19th, 2018, 7:52 am
I just watched the movie again recently and have a question about the cockpit shots. After seeing how they cleverly attached the IMAX camera's to the planes, wouldn't the camera have to be visible by the reflection of the cockpit window? Especially with all the light direction changes going of because of the rapid motion. For instance:

I think you should clearly see a reflection of the camera in the cockpit glass. Anybody know how they avoived this? Was it edited out using CGI in post-production? That doesn't sound very Nolan to me so I was just wondering if someone knows if they used some kind of clever trick I'm too stupid of conceiving myself.


It looks like the camera is attached to the glass. So no chance of reflection. Or it's probably because of angles.

by KnoxHarrington
Hi, thanks for replying.

I guess that's true for some shots. However, not all:

Also, when Hardy runs out of fuel, there's a shot of him taken from directly in front of him, but outside the cockpit, with lots of reflections from light etc. going on.

I guess they also could have filmed it from inside the cockpit and added the glass afterwise.

KnoxHarrington wrote: ↑
April 19th, 2018, 3:39 pm
ss they also could have filmed it from inside the cockpit and added the glass afterwise.

the only part of the panel that's near that angle is in the bottom left, where you're either seeing the camera or the front of the plane.

by ChristMAX
I vaguely remember Nolan saying something about learning how to avoid reflections like this when filming Interstellar, but in saying that, there is actually a shot where you can see Nolan moving in the background through the reflection in one of the helmets (from the top of my head, it's during the detach sequence when Brand says "I'm sorry" to Cooper)

Edit: That does appear to be Nolan to the left of Brand's eye - it's less noticeable in this still however in the film it's a little distracting. Like that extra in Dunkirk, it's something that you can't unsee 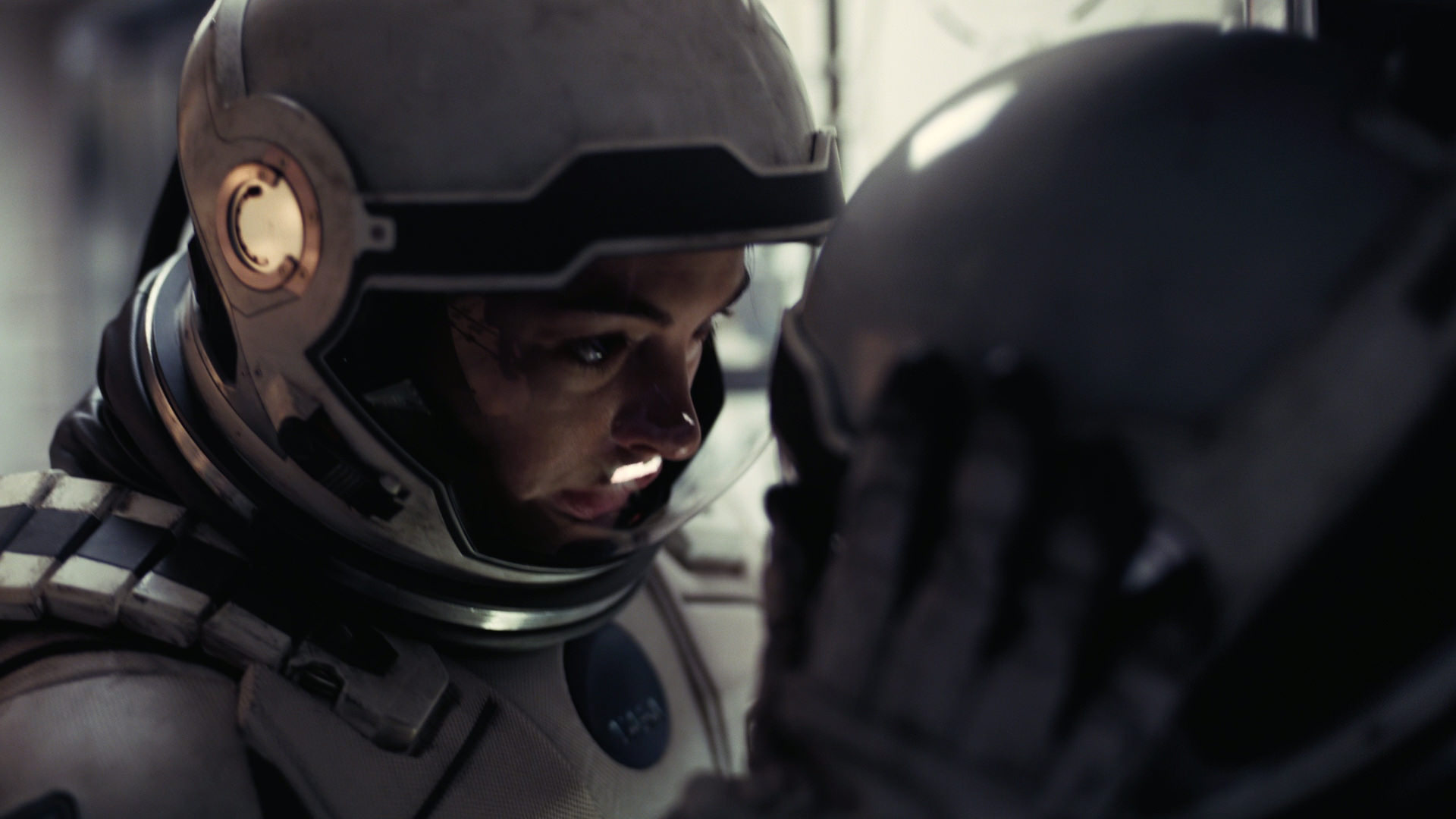 by dormouse7
I think most of the views through the front windshield looking into the cockpit were done on a gimbal that held the body of the replica(?) in the air off a cliff at the southernmost point of California (Point Vicente), with the full horizon view of the Pacific Ocean behind it. Nolan and another guy turned and rotated the cockpit while mounted cameras filmed. Some other shots that were done there were the closeups of Farrier's landing gear being cranked down.

Some other filming through the front windshields was done with the replica in the water (the scenes where Collins (who is shown above) is sinking in his crashed Spitfire. The picture you posted of Collins may be the view we got of him in the cockpit when his plane was sinking.

The IMAX positions I saw for flying were with IMAXs mounted to both wings, one looking sideways into the cockpit and one looking forward along the fuselage. In addition, they sometimes flew with an IMAX that had a custom long angled "snorkel" lens that went over the pilot's shoulder and could be controlled to look in different directions, just as a pilot would.

The IMAXs could only hold 3 minutes of film, so from multiple airports in at least 3 countries (France Netherlands and England) they had to repeatedly take off, film, land, change film (camera configurations could have also been changed depending on the shots they wanted to film).

Skip to about 20 minutes in this Dunkirk Spirit making-of Documentary and you can see how the cameras were used on the wings, the snorkel lens, and the shots that were done on the ground:

As someone said above, the angle of shooting (angle of lens vs angle of the windshield) could get reflections of the camera out of the picture. Also, in general photography, a polarized filter can be used to reduce reflections:
https://photography.tutsplus.com/tutori ... photo-1398

And people can wear dark clothing or camouflage to hide their reflections in ground shots.

Now these three lads worked their arses off. I pushed them hard physically on circuits, we had them in and out of the cold water and made them crawl through the sand and roll around on the wet beach to do their weapons training. They did not bleat about it once!!! I am sure they would have made great soldiers. Harry still maintains his smoulder look. Aneurin Barnard, Fionn Whitehead, me, Harry Styles. Thanks for the work Tom Struthers. 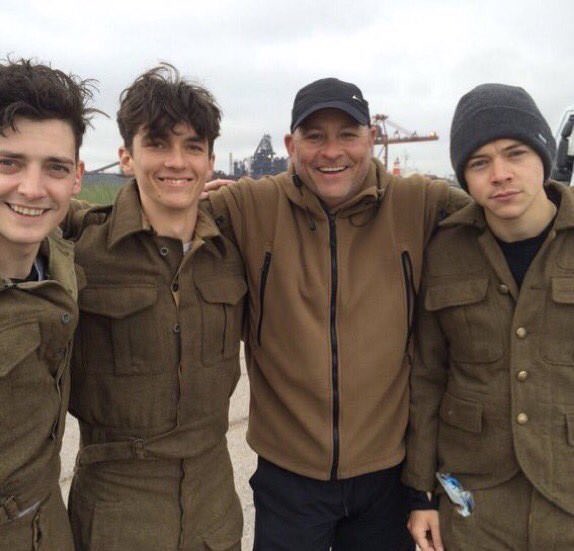 Stunt members and cast Dunkirk.
So proud to work on this job. Such a great team. Look forward to working with you all again sometime. 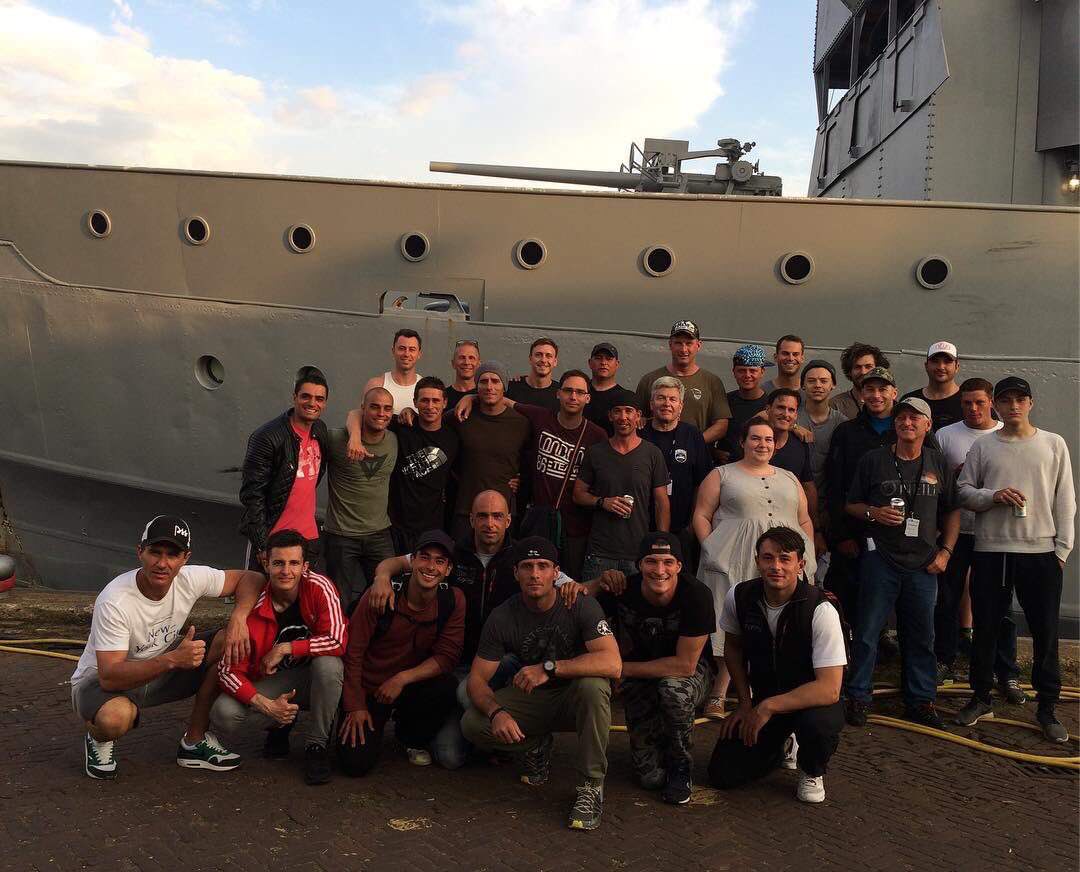 by dormouse7
New funny photo... this may have been on the HMS Medusa. Nolan had the Medusa take the actors out for hours on rough water to see if they would get seasick. 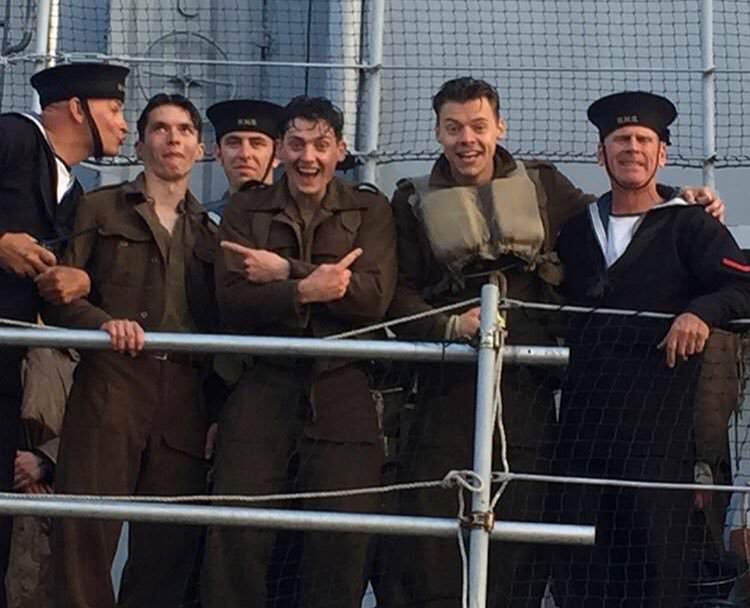