The 2012 superhero epic about Batman's struggle to overcome the terrorist leader Bane, as well as his own inner demons.
Post Reply
9121 posts
mchekhov
Posts: 15900
Joined: June 2009
i think we can safely cross out venom and superhuman strength from this depiction
beanham22
Posts: 110
Joined: November 2010

1. he will not wear a leotard
2. he will not wear a wrestler's mask
3. his fighting outfit is gonna be reminiscent to something of the league of shadows
4. he is not going to be of colossal size...probably same build as Bale in Begins
5. He is not going to be wrestling (The man has learned various martial arts disciplines, for god's sake why would he resort to wrestling)
6. the fighting sequences are going to be highly choreographed through some form of martial arts
7. He will have a smooth Spanish accent

I agree with everything. I can see Hardy whereing like Commondo pants and no shirt or something. To keep the look of Bane their a bit. He has to have scenes with no shirt (obviously fight scenes) or it won't feel like Bane (especially without the mask).

I don't agree about the Spanish accent. I bet Nolan will leave that out to keep Hardy's awesome English voice in.

I agree also about the NO VENOM. Maybe some kind of performance enhancing drug, but even that would make the character less badass imo. He would then be cheating wouldn't he?

I AM JUST SO HAPPY NOLAN IS DOING BANE!!!! AND ONE OF MY FAVOURITE ACTORS IS PLAYING HIM. BATMAN AND ROBIN WAS A JOKE!

Can anywone else imagine a showdown in the Batmcave! like in the comics?

***I Just had to edit this in, But How Badass is that Christian Bale and Tom Hardy are going to be in the same movie? Most liekly with a fight scene at thaty!

Peace
Posts: 11410
Joined: August 2010
Location: Texas
Yeah. I'm pretty pissed at myself for not reading up on Bane. I just always thought he was like how he was depicted in Batman and Robin.

I would have been able to call this the moment they let it slip Hardy was in the film!
Say Girl Was that when Hardy was shooting Bronson? 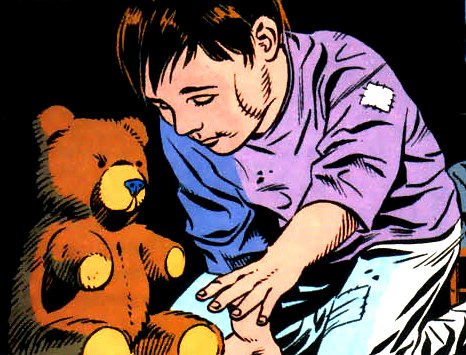 That is one Caucasian little boy.

Oh, and no, I don't want his teddy bear to be in the movie.

Maybe like...on a shelf where you have to look closely for it but that's it.