The Oscar Nominated writer and director to whom this site is dedicated.
Post Reply
993 posts
Silfan
Posts: 124
Joined: September 2018

Sometimes, it’s always great to remember that in a world of terrible, disgusting Hollywood figures, there are some good eggs out there. That’s why we’re here to remind everyone that Christopher Nolan is one of those people, as we remember when the director used his rising star power to help another filmmaker get his first film off the ground.

“Donnie Darko” is a favorite among film fans of a certain age range. The Jake Gyllenhaal-led film never became a box office hit, but was always the film that your high school friends begged you to watch. And when a 2016 interview with director Richard Kelly resurfaced recently, the history of the making of the cult classic “Donnie Darko” became infinitely more interesting.
According to Kelly, esteemed filmmaker Christopher Nolan is the real reason ‘Darko’ reached a wider audience. If he hadn’t stepped in, the acclaimed film would have been doomed to debut as a TV movie and would have (likely) faded into obscurity. Instead, “Donnie Darko” became a critical hit and enjoyed a substantial profit from DVD sales.

Kelly said (via The Guardian), “Sometimes, the wind is at your back. Sometimes, it’s at your front. ‘Darko’ was a disaster at Sundance too. No one remembers that, but it was. I’m grateful for any rosy glow of hindsight. I remember it took us almost six months to sell the movie. It almost went directly to the Starz network. We had to beg them to put it in theaters. Christopher Nolan stepped in and convinced Newmarket to put it in theaters.”

Not only was Nolan instrumental in getting the film on screens, and later on home shelves, but his endorsement was also the best case scenario for Kelly and his crew. A year or so before “Donnie Darko” hit theaters in October 2001, Nolan made waves with his second directorial effort, “Memento.” That film is widely considered to be one of the best films of its decade, with critics and audiences effectively sucked in by the movies nonlinear narrative and weighty themes. Because of his successes, Nolan became a respected filmmaker with considerable pull. As Kelly made clear, he used that influence to put “Donnie Darko” on the map.

We’ve also heard from Steven Soderbergh that Nolan was aided by the “Sex, Lies, & Videotape” filmmaker early in his career. So, maybe Nolan was just paying it forward?

Sadly, the post-“Donnie Darko” life for Kelly has been rough. His follow-up film, “Southland Tales” is infamous for all the wrong reasons. His last directorial effort, “The Box,” is fine, but not anywhere near the hit that would have made him the commodity he was in the early-2000s. Just a couple of years ago, the filmmaker talked about perhaps revisiting ‘Darko’ but nothing has panned out. So, even an endorsement from Nolan can only carry you so far.

If you love Nolan even more after reading this and want to thank him, check out his new film, “Tenet” when it hits theaters in 2020.


Btw, Richard Kelly recently announced that he'll be back with a lot of new projects and that the first among them will soon have a greenlight. What a great news too !!


What was your first serious audition?
When I first got to London, I had a meeting for one of Christopher Nolan's films. But they wouldn't give you the script or anything; they just said, "Dress as a superhero," and I wore the most skin-tight, latex situation. It was so intense that when I walked into the room, Christopher Nolan couldn't look at me. He was so embarrassed—he was just like, "Too much!" I think my over-preparation went against me that day.

Well, I bet he remembered you.
I bet he did.

Why is this popping up on this forum now? 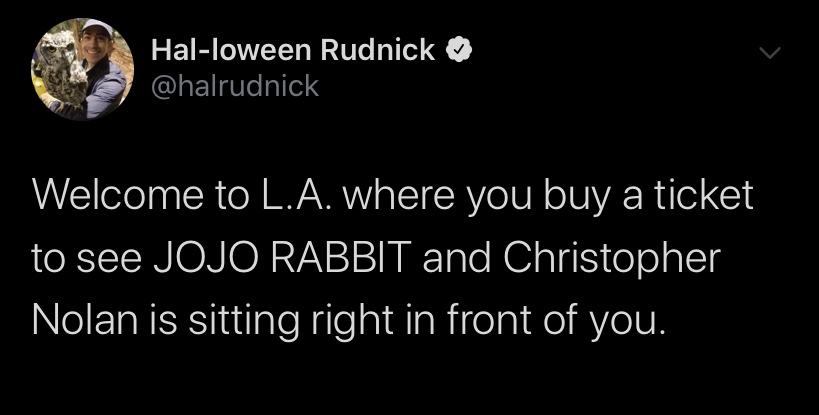