The Oscar Nominated writer and director to whom this site is dedicated.
Post Reply
961 posts

Insomniac
Posts: 782
Joined: February 2012
Nolan out and about in NYC yesterday: 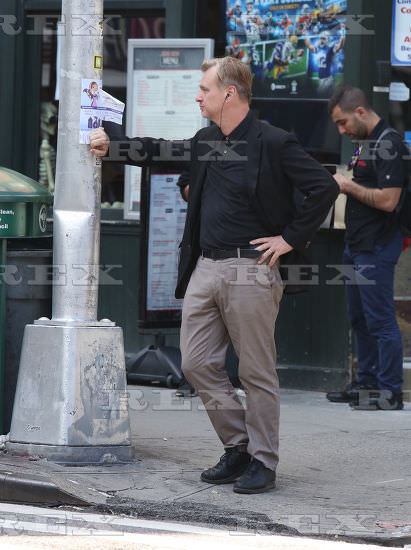 Could very well be listening to a 3 hour demo of score ideas prepared by Hans Zimmer for their next movie.
KnoxHarrington
Posts: 6
Joined: August 2017
The beard is gone. Did he play a role in his new movie perhaps, for which the beard was required?

Cemetrey Gates by the Smiths.

Just look at his outfit, it screams Manchester.

“For those of you who’ve been fortunate enough to collaborate with Chris, you know that whatever project he is involved with he doesn’t take it on unless he is fully committed — and I mean all in,” Sanders said. “The good news for all of us in this room is that Chris immediately got the potential for 4K.”

“He agreed to oversee the remastering of his entire film library for 4K,” Sanders said. “It took months and months out of his schedule. It was during the release of Dunkirk, by the way. But he was really determined to deliver the best of what our format offers to consumers in the home, and as a result I think he’s become the world’s foremost filmmaking expert on 4K and how to use the technology to present films for the home screen.”


“It really puts us in a position where we can get closer and closer to a theatrical print in the home,” Nolan said of 4K UHD with HDR.

He also said he was a “big fan of the 4K disc because it removes the uncertainties of streaming.”

“It’s fantastic for the filmmaker to have a physical media that eliminates the variabilities, the compression and so forth,” he said. “That’s the gold standard that streaming is going to have to reach.”

He noted his generation of filmmakers came up with access to home video, which informed their art.

“I’m really part of the first generation of filmmakers who grew up with home video in the form that we know today, starting with VHS, and the idea that you could have access to a film and you could go back and look at different parts of it and have a different kind of relationship with it,” Nolan said.

He said home video affected his filmmaking on several levels.

“My generation of filmmakers, who were starting out just as DVD was becoming the dominant format, I think were very influenced by our relationship with that new way of looking at films with chapter selection and random access,” he said. “I think we started thinking of films and owning films more like books in a way. I don’t think it’s a coincidence that a lot of us at the time, myself included, started exploring various different narrative structures. I think the things are very related. I think my experience with home video has always informed my filming both narratively and technically.”

“Thank you to all of you for all the great work you do in positioning filmmakers like myself to be able to present our work to wider and wider audiences,” he said.

Sanchez
Posts: 2163
Joined: January 2016
Location: Norway
That looks like a man who doesn't sleep much these days. Aka good news

We know that Steven Spielberg and Martin Scorsese have been in touch with you and Warners Media Group about the demise of FilmStruck and have urged you guys to keep it going.

While it was not your decision, we would like to loudly echo their sentiments. The FilmStruck service was (IS) the best streaming service for fans of cinema of all kinds: classic studio movies, independent cinema, international treasures. Without it, the landscape for film fans and students of cinema is especially bleak. There’s a reason there was a huge outpouring from artists and fans over it being shuttered, they were doing the Movie God’s work.


We know one of the reasons that it has been shut down is because of an upcoming Warners streaming service, but really FilmStruck shouldn’t be a conflict of interest. In this day and age where there are dozens of platforms, curation of content is really important and FilmStruck was providing a service to both satisfy older fans of cinema and a younger generation of cineastes that will be making amazing movies long after we’re dead.

In an era of huge corporate acquisitions of cinema by communication companies- in a business that may render billions of dollars off a medium like cinema, we believe this is a gesture that is needed- a minuscule show of goodwill towards the preservation and accesibility of a tradition and a rich history that would benefit the public.

So we want to add our names to the petition started by Marty and Steven and want you (and Warners) to know that we feel equally strongly and would do anything to support the service being saved.

Figured this was worth its own thread if this thing actually gets revived. Cool to see Nolan rallying behind this as well.

Insomniac
Posts: 782
Joined: February 2012
Nolan and Emma was mentioned in an AskReddit thread about the best and worst of Make-A-Wish encounters:


Just for some background, both my sister and I are pretty damn sick and so we had the rare occasion where we BOTH got wishes (my family suggested that we just do one, but Make a Wish was adamant that we each got our own)

My sister's Make a Wish was to meet Taylor Swift. We flew to Nebraska for 2 days, got in the same meet and greet line as people who won radio contests, took a picture with Taylor Swift, and that was that.

I, on the other hand, asked to meet Christopher Nolan. He had never been requested for a wish, so we were flown to LA where we got a tour of the Warner Brothers lot and then had a private lunch with Nolan and Emma Thomas (his wife). We hung out for two hours, where they finally left because they had some film related thing to do. We found out later that he'd only agreed to an hour, but during the lunch insisted that he stayed longer.

It was quite interesting how we both had celebrity wishes and they both turned out so differently.

He then also added this:


He was great. Incredibly nice and down to earth. Talked to me and my family as if he had known us for ages. Was a great experience; I know one of the biggest things you hear is don't meet your idol because it will tear down your image of them. Nolan and Thomas were so kind, it made me like them even more.

My family was very impressed with him. He took pictures with us and signed all of my Nolan BluRays. And of course, he agreed to do lunch in the first place which was incredible.

Very kind, and very British. He asked for tea and berries for dessert for our lunch. Very patient with my questions. He and Emma Thomas were excellent together too, they were always making jokes towards one another. It was quite fun watching them interact.