Biden of America: The Return of the Democracy - Page 12 - Nolan Fans

Biden of America: The Return of the Democracy

A place for more serious off-topic discussion and debates.
Post Reply
159 posts
Batfan175
Posts: 4664
Joined: January 2012
So far the Dems have been rather disappointing. A bipartisan corporate infrastructure bill is not exactly the transformative change people need right now. As usual, Democrats talk a big game during election season and then they don't even have the courage to get rid of the filibuster or to oppose the Senate parliamentarian because that means they would have no excuse in the future when it comes to passing legislation that fights corporate power. In essence you got a centre-right corporate party with the Democrats and a far-right corporate party with the Republicans. Not much of a choice tbh.


Sinema and Manchin have agreed to kill the Democrats legislative agenda for the next 3-7 years unless Arizona gets rid of her and West Virginia gets rid of him. They only want bills approved by the RepuliQan leadership like McConnell voting for the physical infrastructure bill that reused left COVID19 money.

There's already been over a hundred exceptions to the filibuster used over the decades, one most recently being used to get the debt ceiling approved.

The need for police reform, Build Back Better and investments in society, voting rights, and a federal law to finally protect reproductive rights after years of SCOTUS rolling it back is not likely to happen with these folks around.

Electing more and better Democrats in 2022 and 2024 in the future is also necessary to reduce their clout outside of legally ejecting them from office. 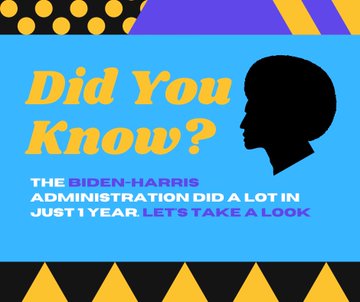 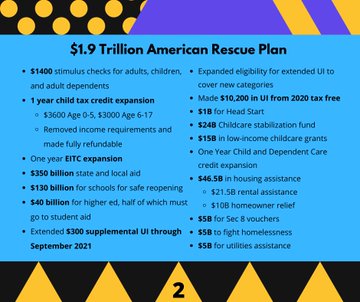 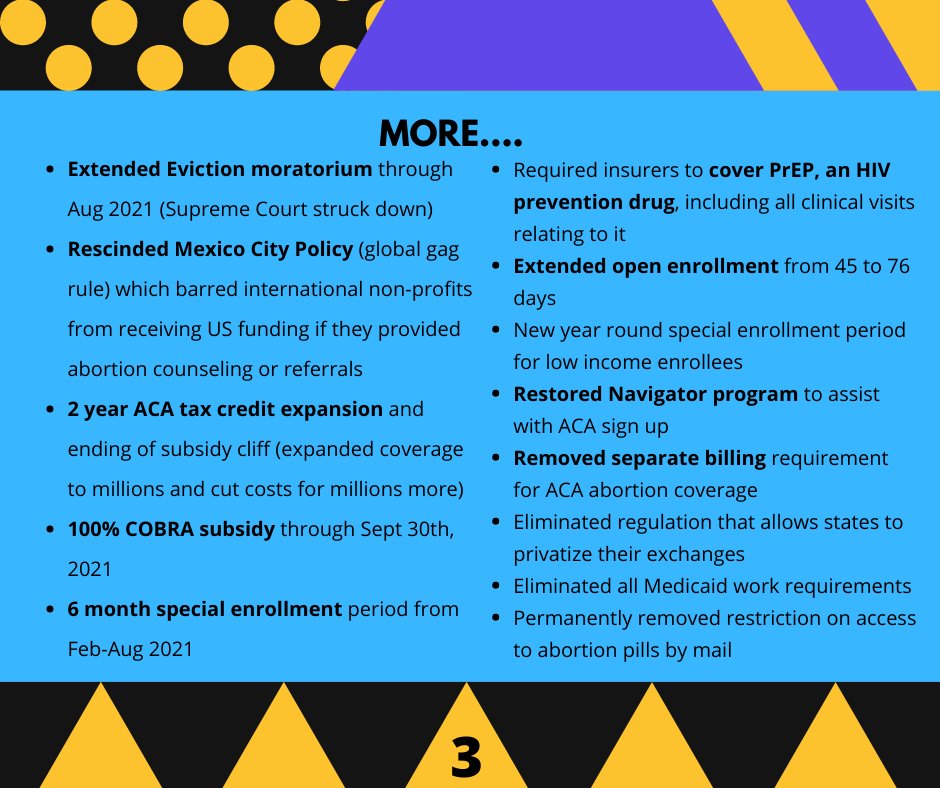 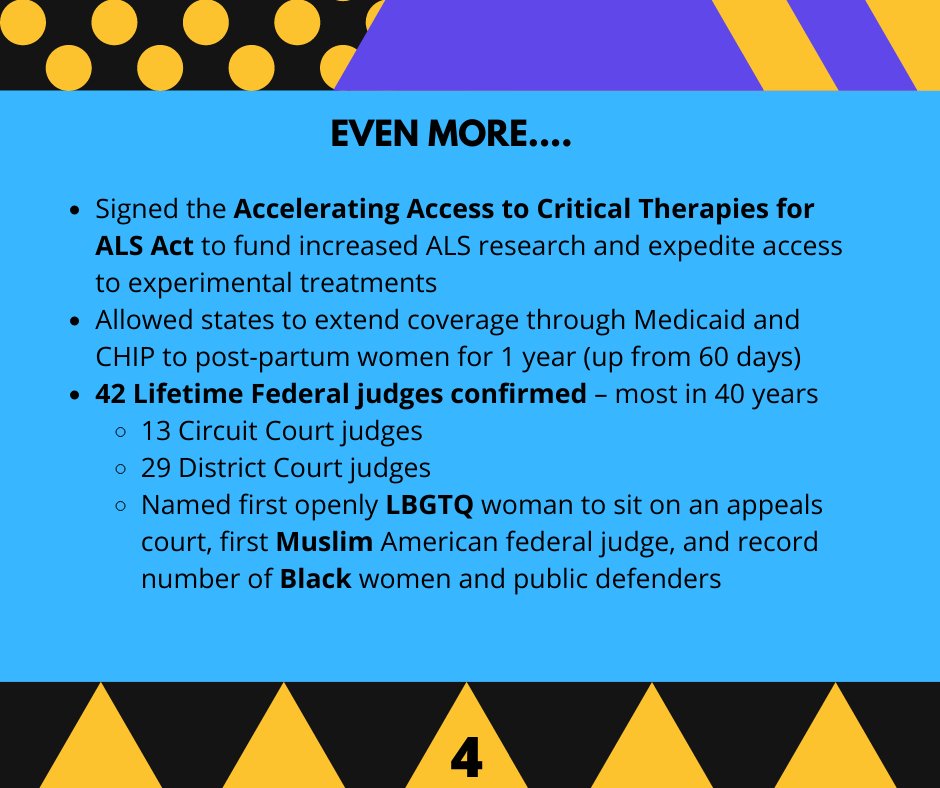 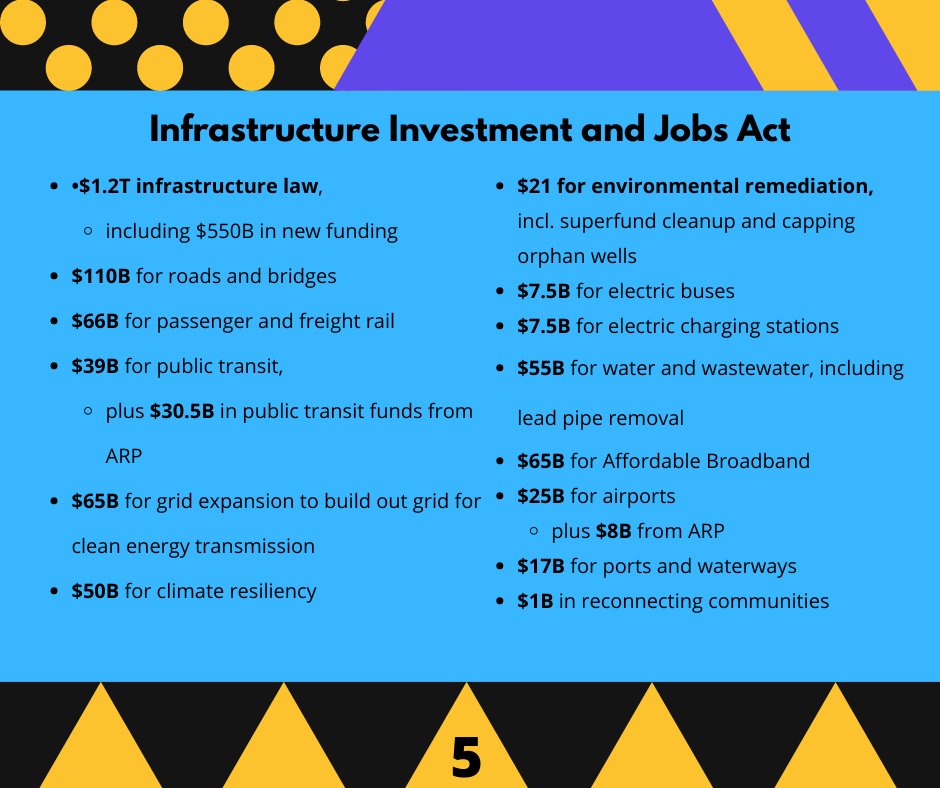 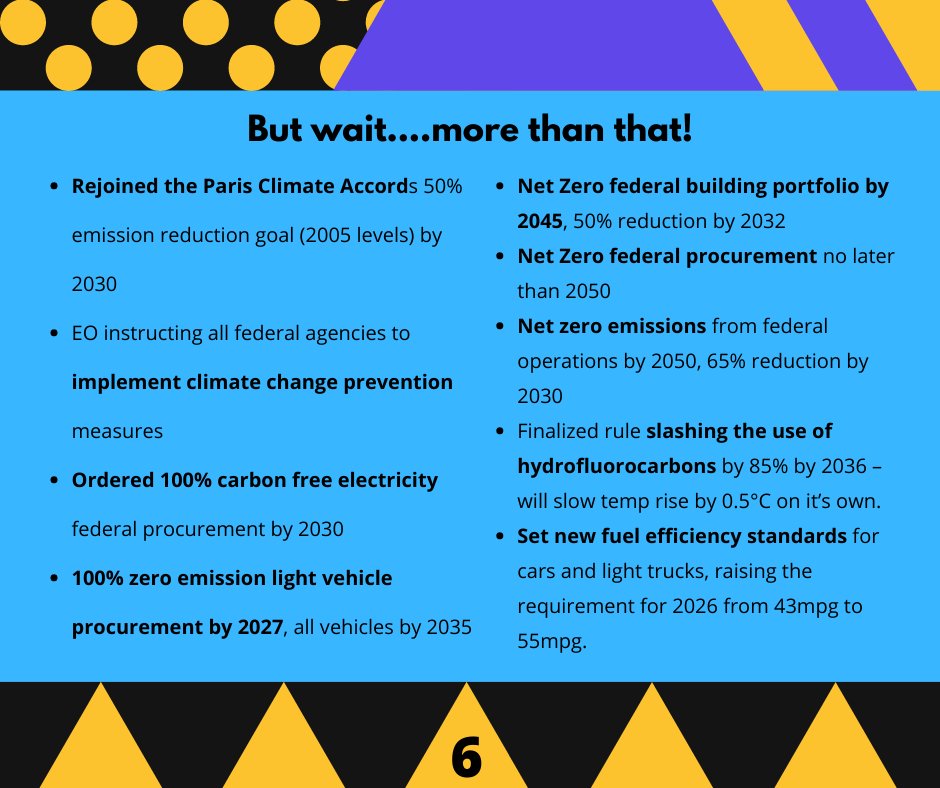 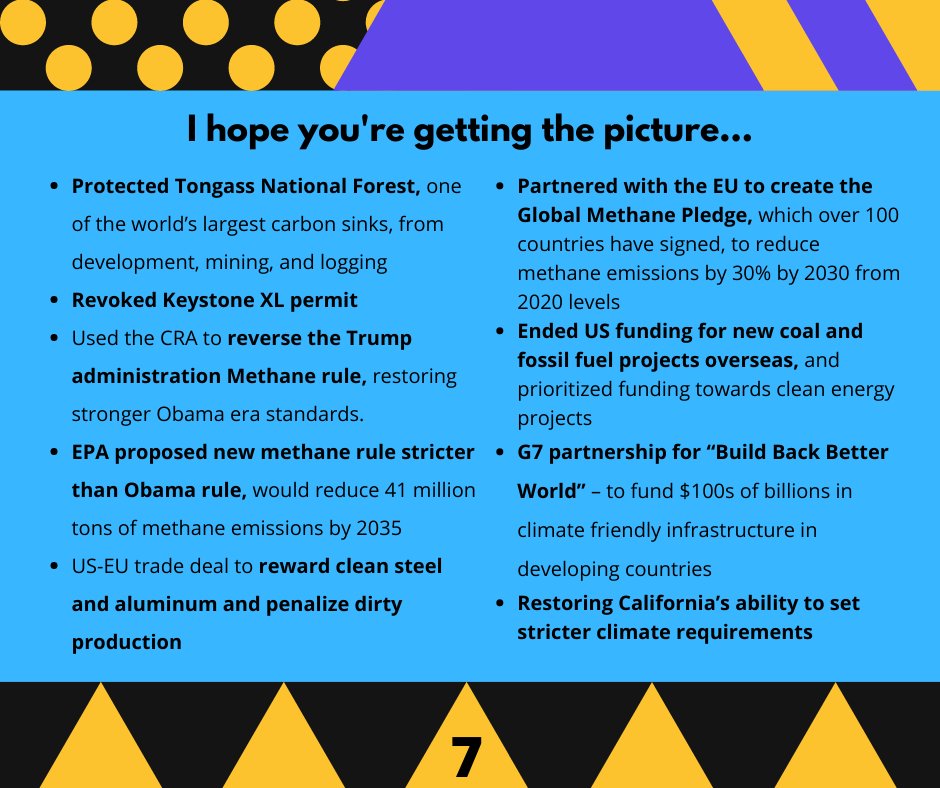 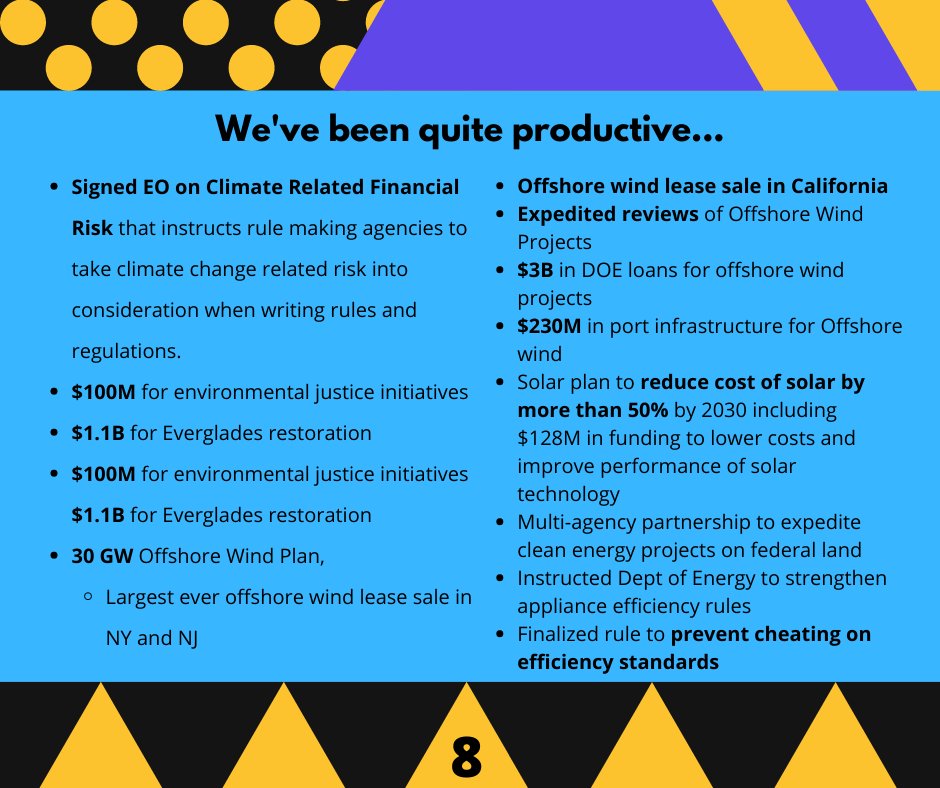 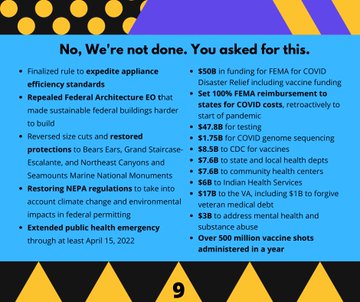 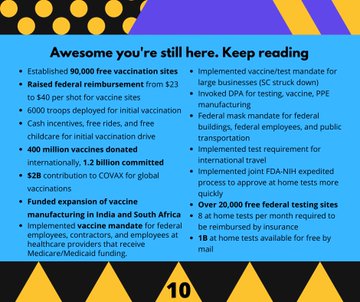 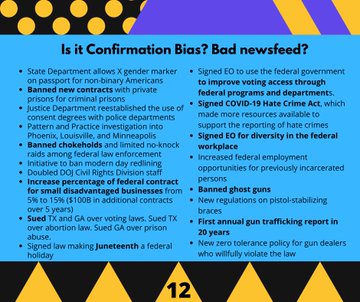 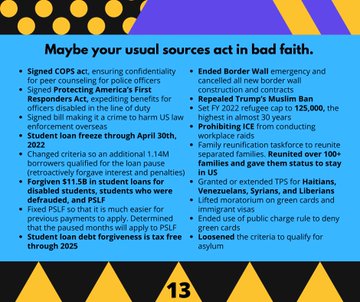 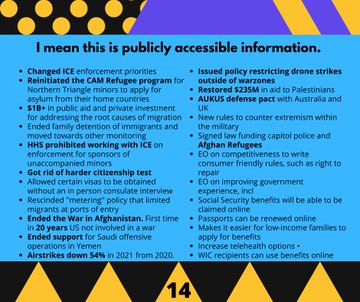 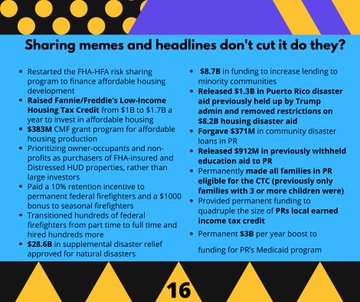 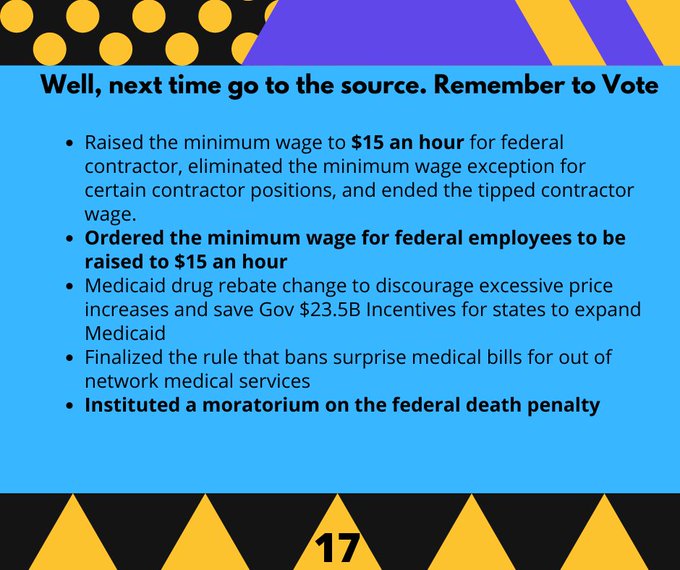 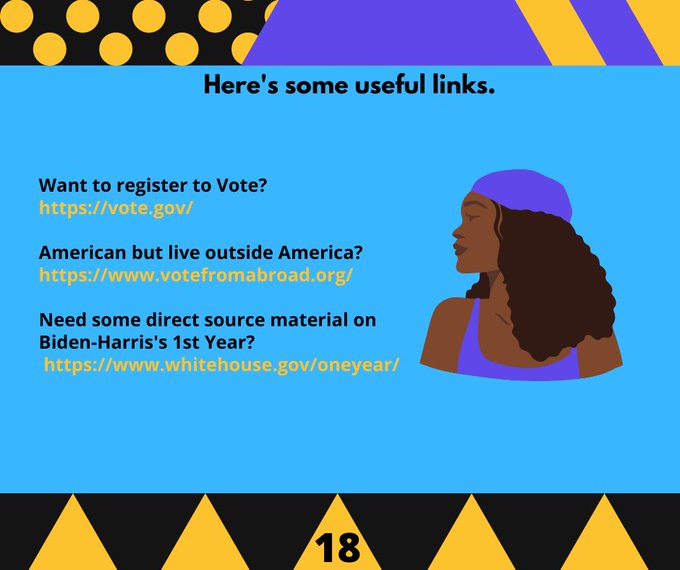 People told Biden the Republicans would not work with him and yet he still acts surprised that the Republicans are obstructionist, even though he was Obama's Vice-president for 8 years lol. Does this guy even know what people's everyday reality is? You'd think a guy who has that much experience would have a grasp on the simplest facts but don't worry he's going to make sure that you know that he will not offer leftist solutions that the country desperately needs and even the campaign promises he SAYS he cares about he does not fight hard enough to make a reality. Voting rights are just another example of this guy not figuring out that the corporate wing of his party and the far-right Republican Party see eye-to-eye on a lot of issues, economic ones for instance, which is why they won't get rid of the filibuster, that pathetic fig leaf meant to provide them with an excuse as to why they can't improve your lives economically. None of these fools in the Dem party fight against Republicans or
corporate power like they fight against leftists in their own party lol.

I guess now even moderate Democratic voters are starting to realise that the Biden wing of the party does not really fight for them but rather to keep the status quo as much as possible. If you can't make improvements to voting rights a reality, you're likely going to start losing a lot of voters because not only did the Republicans pass 33 bills all across the US to try to make sure they have every advantage in an election but those laws often impact the poor and POC specifically so I would not be surprised if in the mid-term elections a lot of Dem voters are just not going to bother to vote at all. They gave Biden the Presidency, and the Dems now have control of the House and Senate and yet he wasn't even able to properly use carrots and sticks against 2 Senators (let's be honest a lot of other Dems are hiding behind those 2 villains of the week too on a number of issues like the 15 dollar minimum wage), even though as US President he's one of the most powerful people on the planet...

Vice - 'People Need to Know She Sucks': Kyrsten Sinema’s Volunteers, Ex-Staff Are Fed Up
“I’m livid. I can only call her a turncoat,” one former volunteer said. “I feel betrayed.”

There are 'sticks' being enacted but neither Sinema nor Manchin give a shit. The president has no direct control over constitutionally elected Senators. That's not how things work. There really isn't a Democratic Senate...it's effectively 46 D, 2 Independents, and 52 Republicans including Manchin and Sinema led by McConnell. McConnell is still the true power of the Senate - the physical infrastructure bill and the debt ceiling got passed on his say so and that stinks.
Batfan175
Posts: 4664
Joined: January 2012
Biden had plenty of options open to him to put pressure on those 2 Senators. With regard to Manchin, for instance, he could have gotten in touch with his donors, he could have attacked him in the media to make sure everyone knows what that guy's legacy is, etc. Now these are examples of tough tactics, which might have affected Manchin's poll numbers, bottom line or his corporate donors...none of which were deployed because Dems don't like to exercise power, they like to be viewed as reasonable, educated, high-brow and civilised people. Winning on policy is nice in their minds but not necessary for their purposes.

And yet the barbarians on the right who use their power every time they get the opportunity almost always get what they want. Why? Because they actually want to win, whereas Dems like to PRETEND in public that they're for what passes as left-wing policies in the US (although they run away from even the potential implication that those might be left-wing policies at every opportunity because they despise their base) but usually just around election season and once they actually have the power they find a million excuses not to use it. You have idiots like Hillary Clinton saying the party moved too far left when she not only lost presidential elections twice but the bipartisan infrastructure bill was already a concession to conservative political interests in the US so why does anyone keep listening to her advice on anything? Because those are the people the mainstream Dem Party likes to showcase as spokespeople for their party. The right-wing, corporate wing of the Democratic Party (sadly still the majority in the Democratic big-tent party) is feckless and impotent unless they need to defeat challengers to their left politically, at which point they will not shy away from using every dirty trick in the book to defeat them. They have no such inclination when it comes to defeating right-wingers or corporate tools within their own party because they agree with Republicans on at least this: policies that cut into corporate profits must be defeated at all costs and everything else is optional.

If nothing gets done, at least the person in charge should have done everything in their power to ensure positive change. This is better than nothing getting done because the person in charge ultimately didn't care enough about the outcome to use all means at their disposal. Biden told donors in 2020 that "nothing will fundamentally change". So far he kept his promise to them. Not sure that's good for the rest of America.

Vox - The Green Lantern Theory of the Presidency (2014)


Presidents consistently overpromise and underdeliver. What they need to say to get elected far outpaces what they can actually do in office. President Obama is a perfect example. His 2008 campaign didn't just promise health-care reform, a stimulus bill, and financial regulation. It also promised a cap-and-trade bill to limit carbon emissions, comprehensive immigration reform, gun control, and much more. His presidency, he said, would be change American could believe in. But it's clear now that much of the change he promised isn't going to happen — in large part because he doesn't have the power to make it happen.

You would think voters in general and professional media pundits in particular would, by now, be wise to this pattern. But they're not. Each disappointment wounds anew. Each unchecked item on the to-do list is a surprise. Belief in the presidency seems to be entirely robust to the inability of any particular president to make good on their promises. And so the criticism is always the same: why can't the president be more like the Green Lantern?

What is the Green Lantern Theory of the Presidency?

According to Brendan Nyhan, the Dartmouth political scientist who coined the term, the Green Lantern Theory of the Presidency is "the belief that the president can achieve any political or policy objective if only he tries hard enough or uses the right tactics." In other words, the American president is functionally all-powerful, and whenever he can't get something done, it's because he's not trying hard enough, or not trying smart enough.

Nyhan further separates it into two variants: "the Reagan version of the Green Lantern Theory and the LBJ version of the Green Lantern Theory." The Reagan version, he says, holds that "if you only communicate well enough the public will rally to your side." The LBJ version says that "if the president only tried harder to win over congress they would vote through his legislative agenda." In both cases, Nyhan argues, "we've been sold a false bill of goods."

Justice Breyer is retiring thank be

Thanks for your service over the years. We can throw a going away party now.

NPR - Justice Stephen Breyer, an influential liberal on the Supreme Court, to retire


The two leading contenders are said to be federal Judge Ketanji Brown Jackson, who was on President Obama's shortlist for the court in 2016, and California Supreme Court Justice Leondra Kruger, who served as assistant, and then deputy solicitor general in both Democratic and Republican administrations prior to her nomination to California's highest court.

Both women are young, in terms of Supreme Court appointment. And both have stellar legal credentials.


The vote was 53-44. Republican Sens. Lindsey Graham of South Carolina, Susan Collins of Maine and Lisa Murkowski of Alaska voted with Democrats in favor of confirmation.


The U.S. economy grew last year at the fastest pace since Ronald Reagan’s presidency, bouncing back with resilience from 2020’s brief but devastating coronavirus recession.

The nation’s gross domestic product — its total output of goods and services — expanded 5.7% in 2021. It was the strongest calendar-year growth since a 7.2% surge in 1984 after a previous recession. The economy ended the year by growing at an unexpectedly brisk 6.9% annual pace from October through December, the Commerce Department reported Thursday. 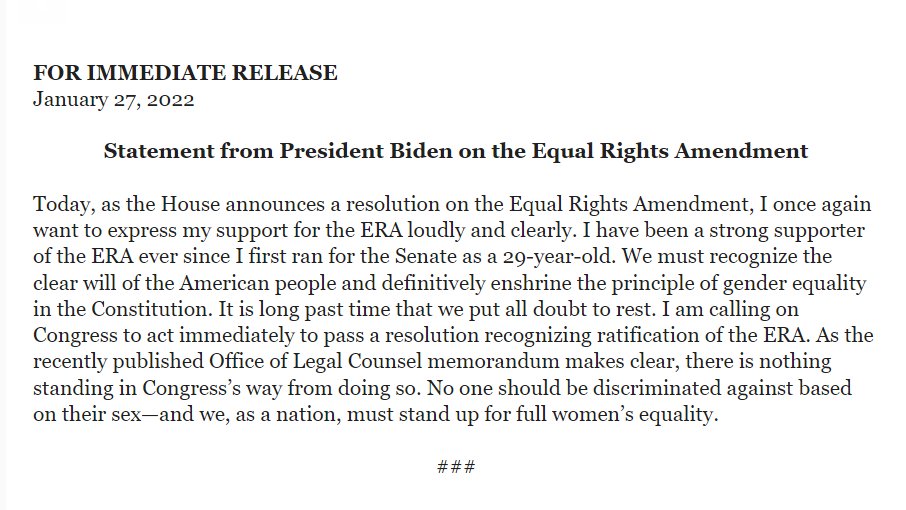 MagnarTheGreat
Posts: 2944
Joined: April 2011
NBC News - Biden to deploy troops to Eastern Europe amid Ukraine standoff [with Russia]
The U.S. is planning to reposition 1,000 soldiers based in Germany to Romania and is deploying 2,000 troops based in the U.S. to Poland and Germany.

I'm sure they have a bunch more replacements of varying capabilities to replace the last guy taken out.

MarketWatch - U.S. gains 467,000 jobs in January and hiring was much stronger at end of 2021 despite omicron
Unemployment rate rises to 4% and wages rise sharply again

“Instead, companies apparently ramped up hiring. Employ gains in December and November were also much stronger than initially reported, newly revised data show.“

revisions way up:
November: 647,000 jobs added
December: 510,000 jobs added
Batfan175
Posts: 4664
Joined: January 2012
Where are the news items where Biden compliments his friend Mitch McConnell at the National Prayer Breakfast? That should worry lefties within the Democratic Party tbh. At least Nancy Pelosi had enough sense not to attend that event this year which has been organised by homophobic far-right Trump supporting monsters at the Fellowship Foundation. That's not even getting into how Biden's not getting his legislative agenda through (partly for lack of trying), and potentially nominating an anti-worker Supreme Court Justice who will hand corporations a lot of what they want until she retires...

Why is this the best that people should settle for again?