Bacon wrote: ↑
November 11th, 2020, 4:28 pm
Not trying to fearmonger but the number of people acting like nothing could possibly happen in the next few months is alarming. The most powerful man in the world is currently firing people left and right and hiring yes-men/loyalists and refusing to concede or acknowledge defeat.

I’m absolutely not trying to offend anyone not here on NF or in general, but this sort of overflowing confidence I’ve seen in some (not counting the immediate post election ecstatic sigh of relief a lot of people had) symbolizes the gap in education when it comes to history/politics, in a way. So many believed “1930s Germany could never happen to us!” and are now in pure shock and disbelief of their own families and friends supporting everything Trump stands for. We tend to think of authoritarian regimes and coupes as a sort of overnight switch where things happen suddenly and are visibly bad enough for us to notice and either never allow it to happen, or at least recognize that it’s happening. When in truth, by the time people realize it, it had already begun years ago.

Disney+'s solo2001
Posts: 16986
Joined: August 2010
Contact:
Contact Disney+'s solo2001
Website
i very well may not be taking this srs enough but my core point was that people need to be hyper consious of the way the process news and especially how they project it onto others. I find most people on the internet almost revel in how bad things are ["lol we're in the apocalypse amirite guys?"] which only amplifies the negativity. There's a BIG difference between discussing issues and editorializing. like the fact that our covid thread is called "Coronavirus Pandemic (2020 - unforeseeable future)" is fucking stupid and unhelpful. This matters so much now since things actually are bad, but a dystopian circlejerk is not a healthy way to cope. It stressed me out just writing this.

Ruth
Posts: 8363
Joined: August 2012
I mean, I don’t disagree. But generally it’s easier to turn to circlejerk jokes or fearmongering when you’re not very well emotionally equipped to actually deal with the brunt of having productive discussion

and like, this year especially, i can’t say i blame people for acting like that. we’re all depressed. if anything it’s more so media’s fault for preying for these exact sort of reactions from people. i do agree it’s not productive tho
Batfan175
Posts: 4511
Joined: January 2012
I mean, Trump is also a cashcow for the media...these guys were happy to have him on in 2015 and 2016 when it meant higher ratings for them while they were laughing to themselves about how someone so awful could never be in a position of actual power and yet once he was in power it was actually much more difficult to get him out of power and even now the media is trying not to offend their audiences instead of calling a spade a spade: the Republican Party does not believe in rules or democracy and Trump accurately reflects the average Republican voter: ignorant, without empathy and vicious and very authoritarian. They are entirely unwilling and unprepared to deal with the implications of any of this because it'd mean having to say that one of the two major political parties in the US is actively trying to undermine the democratic process.

Facebook and 'Fox News' (it's really the WWE of news) also deserve scorn for what was happening during the Obama years.

Bacon
Posts: 26134
Joined: June 2011
So what stops Congress from throwing out the electoral college votes, going to the House to vote and then electing Trump in a legal coup d'etat?

Ruth wrote: ↑
November 11th, 2020, 6:58 pm
I mean, I don’t disagree. But generally it’s easier to turn to circlejerk jokes or fearmongering when you’re not very well emotionally equipped to actually deal with the brunt of having productive discussion

and like, this year especially, i can’t say i blame people for acting like that. we’re all depressed. if anything it’s more so media’s fault for preying for these exact sort of reactions from people. i do agree it’s not productive tho


In recent weeks, FBI agents in New York contacted witnesses and asked new questions about Giuliani's efforts in Ukraine and possible connections to Russian intelligence, according to a person briefed on the matter. The FBI investigators, who have spoken to at least one witness previously months ago, came back to ask new questions recently about possible origins of emails and documents related to Hunter Biden that appear similar to those that the New York Post reported that Giuliani and others helped provide. CNN has previously reported that the ongoing probe is examining whether Giuliani is wittingly or unwittingly part of a Russian influence operation, according to people briefed on the matter.

When asked to comment for this story, Giuliani responded to CNN in a text message on Thursday morning, apparently refusing to engage: "No good reason your story without knowing I'm sure is one u Wouk never cover if it was about THE BIDENS or similar protected species."

The Biden family is a species according to Colludy. Also, Colludy hasn't escaped federal investigation notice.

My biggest problem with Borat 2 is that it portrayed Giuliani as more sane than he actually is in public or this article. 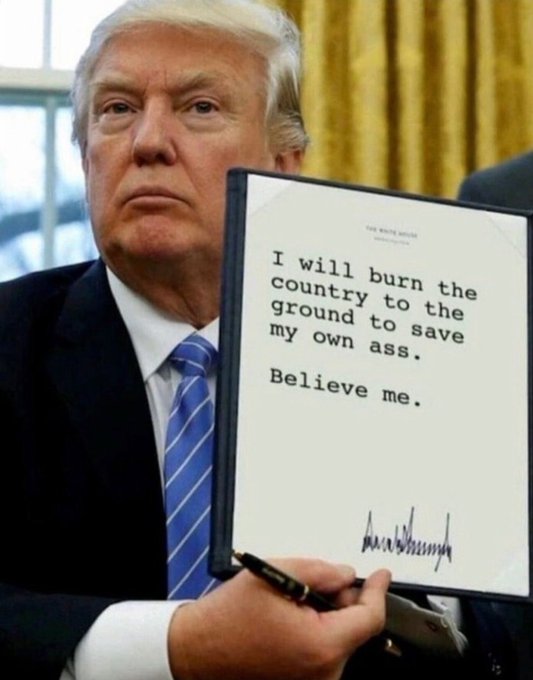 The Washington Post - 20 days of fantasy and failure: Inside Trump’s quest to overturn the election

Donald Trump: ”I am the most fabulous whiner. I do whine because I want to win. And I’m not happy if I’m not winning. I’m a whiner and I keep whining and whining until I win.” (August 2015)
Post Reply
2124 posts