The Secretary of Commerce threatened to fire top employees at NOAA on Friday after the agency’s Birmingham office contradicted President Trump’s claim that Hurricane Dorian might hit Alabama, according to three people familiar with the discussion.

That threat led to an unusual, unsigned statement later that Friday by the National Oceanic and Atmospheric Administration disavowing the office’s own position that Alabama was not at risk. The reversal caused widespread anger within the agency and drew criticism from the scientific community that NOAA, a division of the Commerce Department, had been bent to political purposes.

CNN - Exclusive: US extracted top spy from inside Russia in 2017

MagnarTheGreat
Posts: 2219
Joined: April 2011
New York Times - Brett Kavanaugh Fit In With the Privileged Kids. She Did Not.


Ms. Ramirez’s story would seem far less damaging to Mr. Kavanaugh’s reputation than those of Dr. Ford, who claimed that he pinned her to a bed, groped her and tried to remove her clothes while covering her mouth.

But while we found Dr. Ford’s allegations credible during a 10-month investigation, Ms. Ramirez’s story could be more fully corroborated. During his Senate testimony, Mr. Kavanaugh said that if the incident Ms. Ramirez described had occurred, it would have been “the talk of campus.” Our reporting suggests that it was.

At least seven people, including Ms. Ramirez’s mother, heard about the Yale incident long before Mr. Kavanaugh was a federal judge. Two of those people were classmates who learned of it just days after the party occurred, suggesting that it was discussed among students at the time.

We also uncovered a previously unreported story about Mr. Kavanaugh in his freshman year that echoes Ms. Ramirez’s allegation. A classmate, Max Stier, saw Mr. Kavanaugh with his pants down at a different drunken dorm party, where friends pushed his ***** into the hand of a female student. Mr. Stier, who runs a nonprofit organization in Washington, notified senators and the F.B.I. about this account, but the F.B.I. did not investigate and Mr. Stier has declined to discuss it publicly. (We corroborated the story with two officials who have communicated with Mr. Stier.)

Ms. Ramirez’s legal team gave the F.B.I. a list of at least 25 individuals who may have had corroborating evidence. But the bureau — in its supplemental background investigation — interviewed none of them, though we learned many of these potential witnesses tried in vain to reach the F.B.I. on their own.

Two F.B.I. agents interviewed Ms. Ramirez, telling her that they found her “credible.” But the Republican-controlled Senate had imposed strict limits on the investigation. “‘We have to wait to get authorization to do anything else,’” Bill Pittard, one of Ms. Ramirez’s lawyers, recalled the agents saying. “It was almost a little apologetic.”

Senator Sheldon Whitehouse, Democrat of Rhode Island and member of the Judiciary Committee, later said, “I would view the Ramirez allegations as not having been even remotely investigated.” Other Democrats agreed.

Ultimately, Senator Charles E. Grassley, Republican of Iowa and chairman of the Judiciary Committee, concluded, “There is no corroboration of the allegations made by Dr. Ford or Ms. Ramirez.” Mr. Kavanaugh was confirmed on Oct. 6, 2018, by a vote of 50-48, the closest vote for a Supreme Court justice in more than 130 years.


The whistleblower complaint that has triggered a tense showdown between the U.S. intelligence community and Congress involves President Trump’s communications with a foreign leader, according to two former U.S. officials familiar with the matter.

Trump’s interaction with the foreign leader included a “promise” that was regarded as so troubling that it prompted an official in the U.S. intelligence community to file a formal whistleblower complaint with the inspector general for the intelligence community, said the officials, speaking on the condition of anonymity because they were not authorized to discuss the matter publicly.

It was not immediately clear which foreign leader Trump was speaking with or what he pledged to deliver, but his direct involvement in the matter has not been previously disclosed. It raises new questions about the president’s handling of sensitive information and may further strain his relationship with U.S. spy agencies. One former official said the communication was a phone call.

The inspector general “determined that this complaint is both credible and urgent,” Schiff said in the statement released Wednesday evening. “The committee places the highest importance on the protection of whistleblowers and their complaints to Congress.”

The complaint was filed with Atkinson’s office on Aug. 12, a date on which Trump was at his golf resort in New Jersey. White House records indicate that Trump had had conversations or interactions with at least five foreign leaders in the preceding five weeks.

Among them was a call with Russian President Vladimir Putin that the White House initiated on July 31. Trump also received at least two letters from North Korean leader Kim Jong Un during the summer, describing them as “beautiful” messages. In June, Trump said publicly that he was opposed to certain CIA spying operations against North Korea. Referring to a Wall Street Journal report that the agency had recruited Kim’s half-brother, Trump said, “I would tell him that would not happen under my auspices.”


“The complaint was related to multiple acts, Michael Atkinson, the inspector general for American spy agencies, told lawmakers during a private briefing… But he declined to discuss specifics, including whether the complaint involved the president, according to committee members.”

The Washington Post - Whistleblower complaint about President Trump involves Ukraine, according to two people familiar with the matter 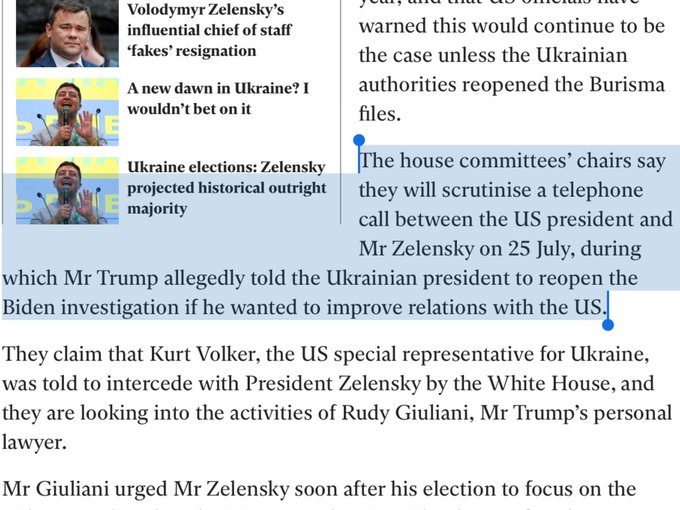 
President Trump in a July phone call repeatedly pressured the president of Ukraine to investigate Democratic presidential candidate Joe Biden’s son, urging Volodymyr Zelensky about eight times to work with Rudy Giuliani, his personal lawyer, on a probe, according to people familiar with the matter.


President Trump told his acting chief of staff, Mick Mulvaney, to hold back almost $400 million in military aid for Ukraine at least a week before a phone call in which Trump is said to have pressured the Ukrainian president to investigate the son of former vice president Joe Biden, according to three senior administration officials.

Officials at the Office of Management and Budget (OMB) relayed Trump’s order to the State Department and the Pentagon during an interagency meeting in mid-July, according to officials who spoke on the condition on anonymity to discuss internal deliberations. They explained that the president had “concerns” and wanted to analyze whether the money needed to be spent.

Administration officials were instructed to tell lawmakers that the delays were part of an “interagency process” but to give them no additional information — a pattern that continued for nearly two months, until the White House released the funds on the night of Sept. 11.

I doubt it will happen. With that said, Trump is in serious mental decline

If it goes through the House, the Senate still won't find him guilty.

But the Representatives and Senators who refuse to find him guilty will now be on the record and they will have to own that decision forever.

If it goes through the House, the Senate still won't find him guilty.

But the Representatives and Senators who refuse to find him guilty will now be on the record and they will have to own that decision forever.


The intelligence officer who filed the whistleblower complaint raised alarms not only about what Trump and Zelensky said in the phone call, but also about how the White House handled records of the conversation, according to two people.


“I think you read everything. I think you read text,” Zelensky said to the gathered reporters on Wednesday. “I’m sorry, but I don’t want to be involved to democratic, open elections of U.S.A. No, you heard that we had good phone call. It was normal, we spoke about many things. I think, and you read it, that nobody pushed me.”