Artemis wrote: ↑
April 15th, 2019, 12:00 pm
The Republicans in my city are having a rally against socialism at the town square (public government property that is open to everyone) between the hours of 12PM-2PM (guess Republicans are unemployed or NEETs if they have the time to go to rallies in the middle of the day). 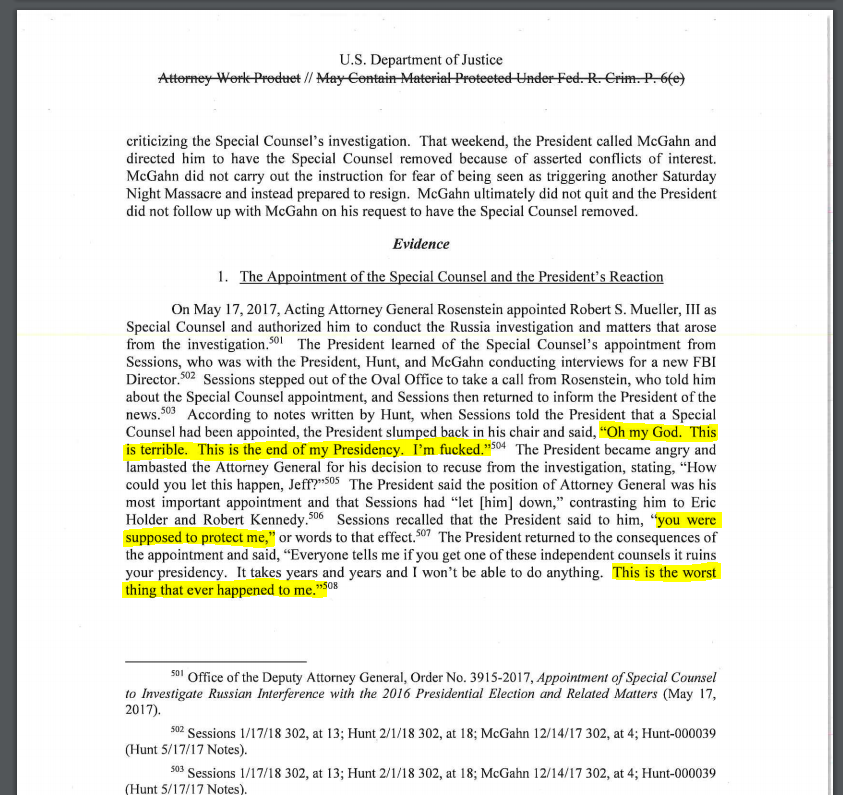 If there is something, just release everything. I’m sick of everyone being strung along lol.

Edit: Why are so many news outlets just pointing out the “I’m f***ed” part? They give no context, and people wonder why a lot of people say fake news on both sides. Don’t let a media outlet tell you what to think, look at it yourselves if you want to know guys. 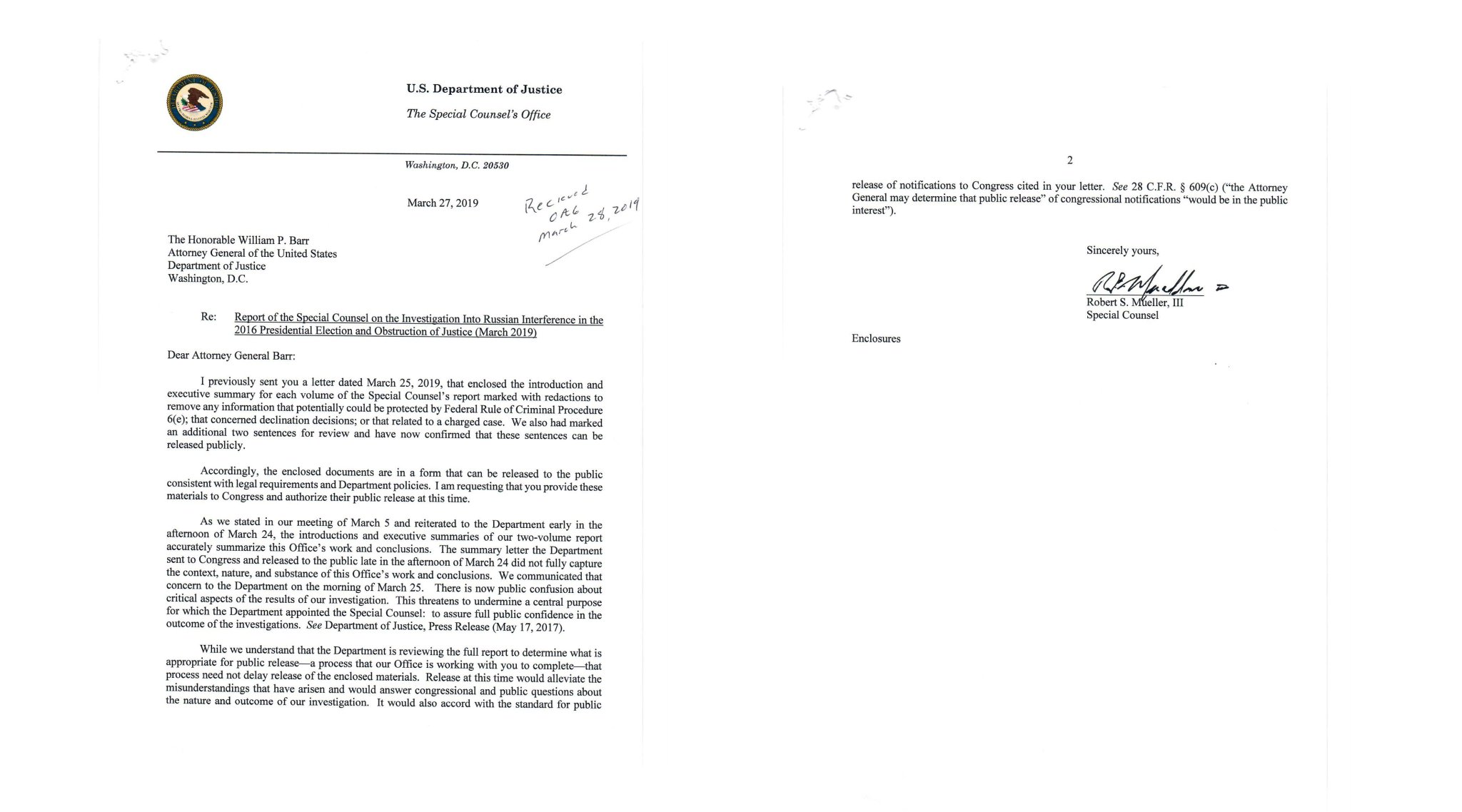 
CRIST: Reports have emerged recently, general, that members of the Special Counsel's team are frustrated at some level with the limited information included in your March 24th letter ... Do you know what they are referencing with that?
BARR: No, I don't. (April 9, 2019)


Trump told advisers he was pleased with Barr’s combative stance with Democratic senators, according to an administration official and a Republican close to the White House who were not authorized to speak publicly about private discussions.

[Trump] has told those around him that, after being disappointed by former Attorney General Jeff Sessions, he has found an attorney general loyal to him.


The Trump administration formally declared its opposition to the entire Affordable Care Act on Wednesday, arguing in a federal appeals court filing that the signature Obama-era legislation was unconstitutional and should be struck down.

Such a decision could end health insurance for some 21 million Americans and affect many millions more who benefit from the law’s protections for people with pre-existing medical conditions and required coverage for pregnancy, prescription drugs and mental health.


By the time his master-of-the-universe memoir “Trump: The Art of the Deal” hit bookstores in 1987, Donald J. Trump was already in deep financial distress, losing tens of millions of dollars on troubled business deals, according to previously unrevealed figures from his federal income tax returns.

Mr. Trump was propelled to the presidency, in part, by a self-spun narrative of business success and of setbacks triumphantly overcome. He has attributed his first run of reversals and bankruptcies to the recession that took hold in 1990. But 10 years of tax information obtained by The New York Times paints a different, and far bleaker, picture of his deal-making abilities and financial condition.

The data — printouts from Mr. Trump’s official Internal Revenue Service tax transcripts, with the figures from his federal tax form, the 1040, for the years 1985 to 1994 — represents the fullest and most detailed look to date at the president’s taxes, information he has kept from public view. Though the information does not cover the tax years at the center of an escalating battle between the Trump administration and Congress, it traces the most tumultuous chapter in a long business career — an era of fevered acquisition and spectacular collapse.

The numbers show that in 1985, Mr. Trump reported losses of $46.1 million from his core businesses — largely casinos, hotels and retail space in apartment buildings. They continued to lose money every year, totaling $1.17 billion in losses for the decade.

In fact, year after year, Mr. Trump appears to have lost more money than nearly any other individual American taxpayer, The Times found when it compared his results with detailed information the I.R.S. compiles on an annual sampling of high-income earners. His core business losses in 1990 and 1991 — more than $250 million each year — were more than double those of the nearest taxpayers in the I.R.S. information for those years.

Over all, Mr. Trump lost so much money that he was able to avoid paying income taxes for eight of the 10 years. It is not known whether the I.R.S. later required changes after audits.

The Washington Post - President Trump has made more than 10,000 false or misleading claims


White House officials asked at least twice in the past month for the key witness against President Trump in the Mueller report, Donald F. McGahn II, to say publicly that he never believed the president obstructed justice, according to two people briefed on the requests.

Bacon
Posts: 26144
Joined: June 2011
Can we mention the crazy alt-right abortion laws passing in Ohio, Alabama, and Georgia right now? They're unbelievably insane and only happening to bring a case before the Supreme Court to overturn Roe v. Wade before 2020 elections.

I hate my state, and I often hate this nation and the clumps of idiots in it.

Bacon wrote: ↑
May 10th, 2019, 6:44 pm
Can we mention the crazy alt-right abortion laws passing in Ohio, Alabama, and Georgia right now? They're unbelievably insane and only happening to bring a case before the Supreme Court to overturn Roe v. Wade before 2020 elections.

I hate my state, and I often hate this nation and the clumps of idiots in it.

It makes me so mad and gives me so much anxiety. Abortion shouldn't even be a talking point. It's so fucking ridiculous.