Asked which of the fast food eats he likes best, "I like it all," said @POTUS. "It's all great stuff." Said it'll be interesting to see how much is left, after the Clemson team fills up. Thinks they'll like it better than anything else the WH could serve.

TBH, I guess they really liked it - I mean, who doesn't enjoy fast food? But from a diplomatic point of view, aren't a lot of college football players - like all college sports players - suffering the consequences of them not being paid? John Oliver made a whole video about the surprisingly dire background of college basketball, for example. So inviting a lot of these college players who are working their asses of for free while also trying to survive their studies... and THEN serving them fucking Wendy's. It sounds bad. Still, it's perfectly possible that they enjoyed it.

Artemis
Posts: 9155
Joined: August 2009
For the most part, people don't enjoy fast food as much as you think they do. People hate eat it.

Also, these dudes have personal chefs and nutritionists at their college making sure they eat damn good so that they can put on muscle and keep that muscle and excel at their games.

I feel like they didn't appreciate eating cold fast food at a dinner meant to honor them.
Batfan175
Posts: 4415
Joined: January 2012
I avoid fast food because I don't want to put in 9+ hours at the gym every week for nothing. 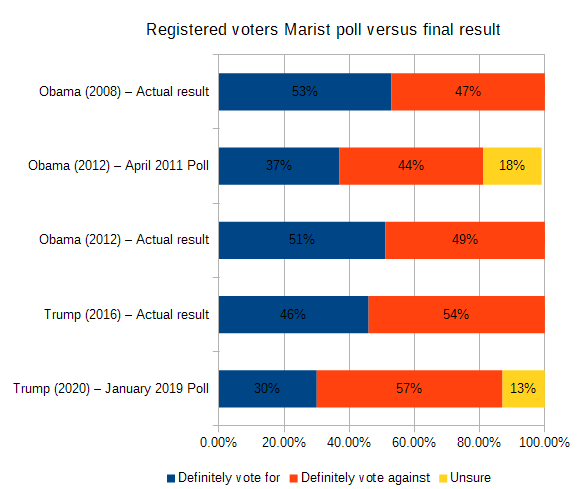 Obama won 78% of those claiming to be undecided in that April 2011 Marist poll.

If Trump is still the 2020 R Candidate and pulled that same number off, he'd finish with 40% of the popular vote.

Though this is a poll of registered not likely voters. A big chunk of the electorate doesn't even show up on election day.


President Donald Trump directed his longtime attorney Michael Cohen to lie to Congress about negotiations to build a Trump Tower in Moscow, according to two federal law enforcement officials involved in an investigation of the matter.

Trump also supported a plan, set up by Cohen, to visit Russia during the presidential campaign, in order to personally meet President Vladimir Putin and jump-start the tower negotiations. “Make it happen,” the sources said Trump told Cohen.

And even as Trump told the public he had no business deals with Russia, the sources said Trump and his children, Ivanka and Donald Trump Jr., received regular, detailed updates about the real estate development from Cohen, whom they put in charge of the project.

The special counsel’s office learned about Trump’s directive for Cohen to lie to Congress through interviews with multiple witnesses from the Trump Organization and internal company emails, text messages, and a cache of other documents. Cohen then acknowledged those instructions during his interviews with that office.

BuzzFeed News first reported last year that Cohen and an associate, Felix Sater, had continued working on Trump Tower Moscow through June 2016. Sater communicated with Russian bankers, developers, and officials connected to the Kremlin. That revelation was confirmed in Mueller’s filings against Cohen in court last November.

That's just... vile.
Ruth
Posts: 8216
Joined: August 2012
The man beating the drum was so patient, I feel like most other people would have punched his teeth in. That has to be the most pathetic thing I’ve seen in a long while

What’s horrible is that most, if not all, of these people seemed to be teenagers. I wonder at what point should people stop explaning this away as childish immaturity, edgy phases, ignorance learnt at home/other familiar environments, and actually hold these kids accountable for what they’re doing.
Post Reply
2009 posts