Unfortunately his party has become more detached from reality as time goes on, not less. 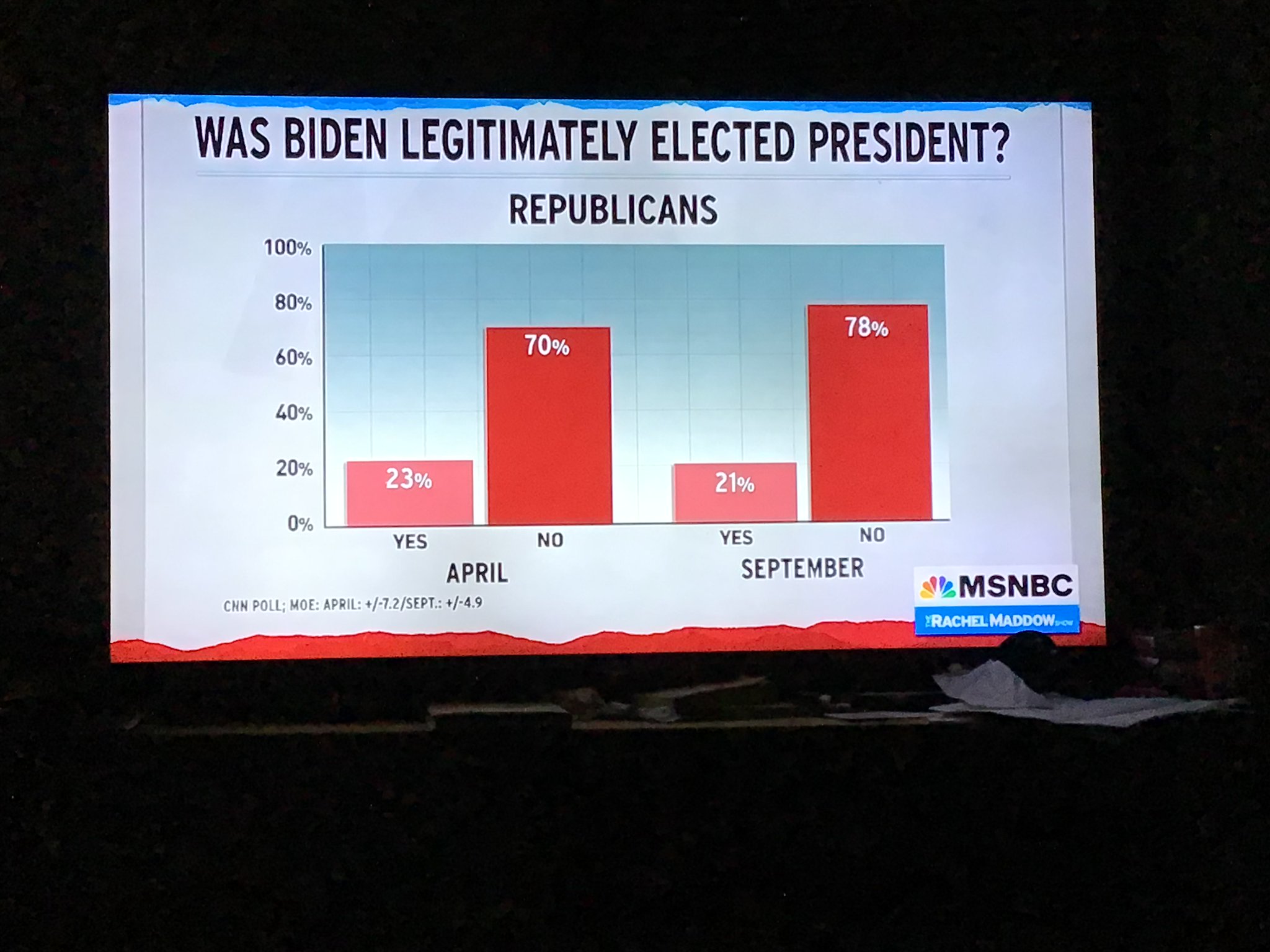 And they're pushing voter suppression laws in areas of their control based on their big lie.

NBC News - House Democrats press forward with effort to curtail presidential powers after Trump
Many of the bill’s provisions are a response to the way Donald Trump operated as president.

MagnarTheGreat
Posts: 2844
Joined: April 2011
NY Magazine - Trump Lawsuit Says He’s Too Addicted to Twitter to Make Rational Decisions
Also, he wants to get back on Twitter.

Trump's lawyers say Trump is an addict who needs his dealers to let him continue to buy from them and therefore private property terms of service don't exist...or some nonsense like that.

The truth is he was a raging narcissist before social media ever really came about and Twitter was just a means to an end.

Vice - Trump Supporters Have Already Turned on the Cyber Ninjas


One America News, the upstart far-right media outlet best known for doggedly backing Donald Trump before, during and after his presidency, got about 90% of its funding from AT&T.

That eye-opening news, which met with pushback from the telecom giant, was reported in an investigative piece by Reuters. The news agency reviewed court records and came away with a number of stunning financial details and connections that had not previously been reported.

Gizmodo - Far-Right Network One America News Was Almost Entirely Funded by AT&T, According to Court Records

AT&T not only funds the Trump news network, they essentially co-founded it by requesting it be created in the first place.

MagnarTheGreat
Posts: 2844
Joined: April 2011
The Daily Beast - Trump Tells Republicans Not to Vote in 2022 or 2024 [unless they embrace his baseless conspiracy theories] (See also: Post-election lawsuits related to the 2020 United States presidential election)

CNN - Andrew McCabe, fired by Trump, gets job and pension back


Former FBI Deputy Director Andrew McCabe, whom Trump-era Attorney General Jeff Sessions fired hours before his retirement as Donald Trump’s political furor toward him grew, has settled a lawsuit with the Justice Department, getting his job back and recouping hundreds of thousands of dollars in legal fees, his affiliation with the bureau and his pension.

Business Insider - A top GOP committee sent a message accusing supporters who hadn't donated of being traitors: 'You abandoned Trump.'

USA Today - Fact check: Trump, not Biden, made comment about taking guns without due process

MagnarTheGreat
Posts: 2844
Joined: April 2011
The Washington Post - The Attack: Before, During, and After


President Donald Trump’s assault on American democracy began in the spring of 2020, when he issued a flurry of preemptive attacks on the integrity of the country’s voting systems. The doubts he cultivated ultimately led to a rampage inside the U.S. Capitol on Jan. 6, when a pro-Trump mob came within seconds of encountering Vice President Mike Pence, trapped lawmakers and vandalized the home of Congress in the worst desecration of the complex since British forces burned it in 1814. Five people died in the Jan. 6 attack or in the immediate aftermath, and 140 police officers were assaulted.

The consequences of that day are still coming into focus, but what is already clear is that the insurrection was not a spontaneous act nor an isolated event. It was a battle in a broader war over the truth and over the future of American democracy.

Since then, the forces behind the attack remain potent and growing. Trump emerged emboldened, fortifying his hold on the Republican Party, sustaining his election-fraud lie and driving demands for more restrictive voting laws and investigations of the 2020 results, even though they have been repeatedly affirmed by ballot reviews and the courts. A deep distrust in the voting process has spread across the country, shaking the foundation on which the American experiment was built — the shared belief that the nation’s leaders are freely and fairly elected.

The Most Damning Jan 6th Revelation Yet | Talking Points Memo
New Emails Show Trump and Eastman Saw the Insurrectionists as the Foot Soldiers of the Coup. They Cheered Them on and Used Them in Real Time.


The Post has emails – presumably emerging out of the committee investigation – of what happened during the insurrection. As the insurrectionists were storming the Capitol and Pence was holed up in a secure location as they hunted for him and members of Congress, Eastman emailed Pence and his top aide saying that the insurrection was Pence’s fault for not going through with the coup plot. With the President’s supporters ransacking the Capitol Eastman demanded Pence shift course and do the right thing.

These exchanges capture something we suspect and know in some way. But here we’re getting the details, the documentary evidence. Eastman didn’t recoil when the President’s rally escalated to violence. He clearly saw the inside coup plot and the insurrectionists on the street as part of the same effort. This isn’t surprising to most of us. The insurrectionists were laying siege to Pence in the Capitol because Pence wasn’t going along with the plan. And the answer was to go along with the plan. Eastman recognized the insurrection as the paramilitary wing of the coup plot he was part of and as the Capitol was under siege used it as a cudgel to force Pence’s hand.

In real time, Trump’s message was the same as Eastman’s. You brought it on yourself and they’re my guys. The way to lift the siege is to do the right thing and support the coup. They both recognized the insurrectionists as their foot soldiers and expressed as much in real time to the members of Congress under siege. And of course they did since they were their foot soldiers.

It’s hardly surprising that both Trump and Eastman were cheering on the assault on the Capitol in real time or seeing it in the same terms. They were part of the same war room. They were leading it. Directly or indirectly McCarthy was the source of those quotes from the conversation with the President. It was reportedly anger and expletive filled. Of course he later fell in line. Much of the resistance to the investigation was his effort not to be placed under oath to reveal what happened on that day and the fact that he resisted it.

A new poll published Monday found that the majority of viewers of conservative-leaning cable television believe former President Donald Trump's claims that the 2020 presidential election was stolen from him.

The national poll, conducted by the Public Religion Research Institute (PRRI), discovered that 82 percent of regular Fox News viewers—who stated that they trust the outlet more than any other network—agreed with the former president's unsubstantiated claims of widespread voter fraud.

Fox News reporters have often reiterated Trump's claims in the year since the election, and the outlet's website also has an entire page dedicated to stories on voter fraud concerns.

One of the networks' biggest stars, Tucker Carlson, admitted in a September interview that "I try never to lie on TV. I just don't—I don't like lying, [but] I certainly do it, you know, out of weakness or whatever."

Business Insider - Trump told a gathering of House Republicans that he loves all of them, except the 13 who voted for Biden's infrastructure bill, report says

Five years of Trump whining never delivered on 'infrastructure week'. Now the new president got it done with hopefully more infrastructure to come.