Vader182
Posts: 20102
Joined: June 2010
Location: The White City
Contact:
Contact Vader182
Website AOL
I thought the finale was...just okay. Lots and lots of "cool" moments, but often (to me) felt contrived for cheap suspense and awe. Every major threat is impotent. The episode constantly does this thing where it presents a terrifying and seemingly overpowering threat, and then passively discards it. The stakes weren't there for me, I'm sorry to say.

My heart sank when I realized this would be the third or fourth "shooting through hallways" corridor episode of a very short season, robbing epic showdowns and firefights of the gravitas they might've had. This show is best when it's on an epic canvas.

All the Luke stuff is low-key terrible. I had an involuntary reaction of amazement, but the action was a tired recreation of the Vader hallway scene (what "fans" always wanted!) while Luke himself was...bizarrely cold and detached? He seemed more like a Skyrim NPC asking for a quest item than the real Luke Skywalker. He didn't try to have a real conversation with Din. He didn't ask about Gideon, or the Star Destroyer. He demanded the quest item and flew off....not to mention the uncanny terror of the deepfake CG. I actively despised all of that.

That said, Mando taking off his helmet saying goodbye was an amazing moment and earned the emotion. I teared up. Pascal sells it.
That said, I'm *delighted* so many of you loved it. I'm enjoying the contact high. 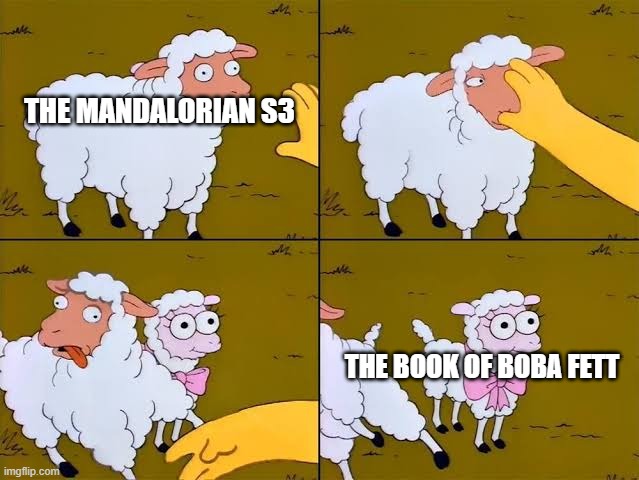 It's manipulative in the cheapest way. And poor deepfake combined with cold quest NPC detachment is horrific. Like seeing someone's twin for the first time, not knowing he had one.

BlairCo
Posts: 19857
Joined: June 2011
Location: The Ashes of Gotham
Contact:
Contact BlairCo
Website
It's not like the possibility of Luke showing was not already set up, since this entire season was all about Mando trying to find somewhere or someone who will keep Grogu safe. Who is a better candidate than Luke? It was Yoda who trained Luke, and now it is Luke who will train someone of Yoda's species.

We may see him again as well as Luke in some form (hopefully with better CG), but the show has closed the chapter on that dynamic and will instead draw its attention towards seeing our characters take back Mandalore. That narrative redirection suggests a show that is bigger in scope and scale, and I am all about that.

o SHAKESPEARE o
Posts: 698
Joined: July 2012
Location: Korova Milk Bar
So, this is what fans who were disappointed in the Sequel Trilogy (TRoS excluded) must have felt watching those movies, huh? Well, unlike them, I’m glad there are many who are enjoying this, but I think after two seasons it’s safe to admit it’s just not for me. Feels almost exactly like what many expected (feared?) from a corporate, Disney-fied Star Wars franchise. Safe, referential, “Marvelized,” and, worst of all for me: low stakes. I mean, the moments people buzz about on Twitter after episodes “air” are mostly cameos rather than discussions about the characters and their journeys, and that’s just not my thing when I’m watching long-form storytelling, like television.

I will say though, there have been plenty of episodes here where I’ve thoroughly enjoyed the spectacle and fun of it all, but they’re always — eventually — funneled back toward a story point or beat that lets the air out of my excitement. The moment everyone’s buzzing about from this finale is that point/beat again for me, in which it really feels like the point everything in this narrative engine is driving toward is another
legacy appearance
or reference.

Only silver lining is that I think this ending
will help move away from the formula which has become tired to me by this point: Mando flies somewhere to try and get something, something threatens Grogu’s safety, Mando prevails over that something and flies off to next “something.” All of which I felt was stifling the character growth and overall narrative urgency that the show so desperately needs. It was a good choice to finally separate Grogu from Mando, and if it were up to me, I would now flash forward a great deal of time to show Grogu as a young kid, grappling with his destiny and Master, while still yearning for his connection with Mando. Like a dual-protagonist scenario, in which two people in entirely different worlds are bonded together by a strong connection (not unlike Rey and Kylo). We shall see where they take it though!
Okay, that’s my two cents! I genuinely hope people continue to enjoy this, and it seems like the vast majority do (and will). Just had to get some of those feelings of disconnection with the show off my chest to see if there are others who feel the same.
m4st4
Posts: 55632
Joined: May 2010
Are we already in the bad takes territory?

You know, the one about this being 'what fans TRULY wanted' from Star Wars? As a shot fired to
.. God knows which aspect of Star Wars nowadays... Prequels, sequels, specific parts of sequel trilogy... Ugh.

I feel like this was, mostly, what Star Wars is supposed to be. I just wish finale didn't leave such a bad taste in my mouth.

Vader182
Posts: 20102
Joined: June 2010
Location: The White City
Contact:
Contact Vader182
Website AOL
I'm hoping I connect more to the finale on a rewatch, but even if I don't Season 2 remains some of the best Star Wars ever and I'm extremely excited for what comes next. Episodes 1, 5 and 6 were all amazing, and a lot of the other episodes were merely extremely good. That's frankly more consistency than Star Wars has ever had.