Crazy Eight wrote:
I'm judging the picture, not his performance.

Talli has the unique ability to judge an entire performance based on a single picture. Depp said this is his best since Sparrow 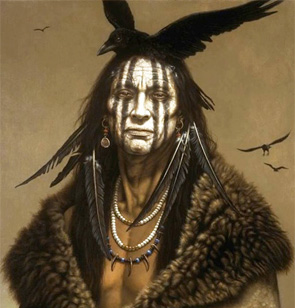 I’d actually seen a painting by an artist named Kirby Sattler, and looked at the face of this warrior and thought: That’s it. The stripes down the face and across the eyes … it seemed to me like you could almost see the separate sections of the individual, if you know what I mean. There’s this very wise quarter, a very tortured and hurt section, an angry and rageful section, and a very understanding and unique side. I saw these parts, almost like dissecting a brain, these slivers of the individual. That make-up inspired me.

It just so happened Sattler had painted a bird flying directly behind the warrior’s head. It looked to me like it was sitting on top. I thought: Tonto’s got a bird on his head. It’s his spirit guide in a way. It’s dead to others, but it’s not dead to him. It’s very much alive.


one word. Brilliant. Depp's imagination has no bounds. Chekhov.


for those out of the loop, Depp said when he came up with this character it was the first time in a while that he felt as excited as he did when he created Jack Sparrow

"The whole reason I wanted to play Tonto is to try to [mess] around with the stereotype of the American Indian that has been laid out through history, or the history of cinema at the very least — especially Tonto as the sidekick, The Lone Ranger’s assistant. As you’ll see, it’s most definitely not that."


what does acting talent have to do with success rate of picking movies that will be successful at the box office?


what does acting talent have to do with success rate of picking movies that will be successful at the box office?

I think he was talking about the quality of the movie and not box office success.. either way you are right though because neither has to do with acting talent.
Post Reply
548 posts