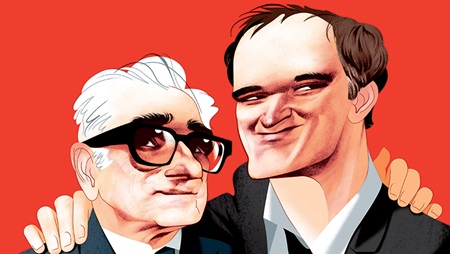 Turns out not so much

Tarantino doesn't say much during the interview ^^ (maybe he was awestruck) and most of what Scorsese is saying (which is great) has been said elsewhere. I'd hoped they'd talk about The Irishman a bit more, it's really brief.

Artemis
Posts: 9117
Joined: August 2009
My friend who lives in Buffalo, NY found out an indie theater near him is screening the film.

"While plans are still being formed, the film will likely be seen in a couple hundred U.S. theaters, venues primarily belonging to smaller circuits such as Landmark and iPic. It will have an exclusive theatrical run of 26 days."

"Netflix was willing to keep “The Irishman” in theaters for 45 days before premiering it on its streaming service, according to an insider, and was also open to giving exhibitors up to 75% of the ticket sales. That wasn’t enough to entice major chains such as AMC and Regal."

It does say that overall the filmmakers are satisfied with the outcome, but man, it's nuts to see they were willing to make those kinds of concessions and still no takers.

Robinson alleges that she was underpaid because she was a woman, called a “bitch” and a “brat” by De Niro, subjected to jokes by him about “his Viagra prescription,” and suggested she “could get pregnant using sperm” from a married male co-worker.

The suit also claims De Niro “urinated during phone calls with her and met her wearing only his pajamas or a bathrobe,” directed her to “scratch his back,” that he “also stood idly by while his friend slapped Ms. Robinson on her buttocks,” and he had her put away his clothes, and vacuum his apartment.

AsianVersionOfET
Posts: 4011
Joined: May 2014
Location: [insert non-spoilery location here, that wasn't a spoiler to begin with]
$12 mil for all that horrible stuff huh? Damn, sign me up and let De Niro call me whatever the fuck he wants

I wonder if she knew that there is this thing called "quitting" if she doesn't like doing some of the chores at work.

Granted, all this makes De Niro sound like a jerk which isn't anything surprising but it's also exactly how I imagined assistants are treated in Hollywood (male or female). Basically Hell's Kitchen for errand boys/girls. You could argue she has a case for mobbing but 12 million is fucking insane for what was mentioned.
Last edited by LelekPL on October 3rd, 2019, 6:26 pm, edited 2 times in total.