the_red_ninja wrote:Apparently there was a mid credits bonus scene at the end. Anybody see it?

Any thoughts on who the boot-wearing person is that appears at the lake?

Yes, it's that same boot-wearing person spying on Alexandria during night. You can see them wearing a dark hoodie but that's all

My theory is that it's a brand new character cause I really don't see who it could be
Batfan175
Posts: 4473
Joined: January 2012
An interesting take on the show and its outlook on the world: http://www.vulture.com/2016/12/the-walk ... scism.html

User of Interest
Posts: 1270
Joined: September 2014
I can't wait for Negan's death! God, I hate him! I hope Rick either kills him horribly or torture him for a veeery long time! #RiseUp #AllOutWar

Who do you think is gonna kill Negan?

User of Interest wrote:
I can't wait for Negan's death! God, I hate him! I hope Rick either kills him horribly or torture him for a veeery long time! #RiseUp #AllOutWar

Who do you think is gonna kill Negan?

Comics spoilers ahead:
you can always wait then, the comics take place two years after the current TV show timeline and Negan is still alive and well. He was jailed by Rick after being defeated, but he escaped and currently acts as an 'ally' of Rick against the Whisperers.

m4st4
Posts: 55549
Joined: May 2010
Location: Arrakis
Can't stop reading the comic book. I'll finish the whole thing and read it on a monthly basis, catch up on the series after I'm done with 160+ issues. Right now that's secondary to me but also so different from the comic book in terms of plot points and characters that it really does feel like alter-reality.

m4st4
Posts: 55549
Joined: May 2010
Location: Arrakis
Alrighty, how many people here reading the comics as well? It'd be pointless if I decided to comment on TWD in the comic book thread suddenly, is there a way to merge the two... here? Of course we'd be allowed to talk in non spoilers only about issues that are already covered in the TV series?

Look all I'm saying is Kirkman's series completely captured my attention and I think it's getting bigger, and better and more ambitious by the arc... and when I see the work of Charlie Adlard, him drawing some of my favorite characters like this (non spoilerific - sorta - recent image of a popular character): ...I'm in love with the comic books... and The Walking Dead, anew. And I want to talk about it damn it. Mind you, I'll continue watching TV series since it very much is the alternate reality sort of situation like you guys said. I feel like both mediums have something good to offer.

Nomis
Posts: 18896
Joined: June 2012
Location: stuck in 2020
Caught up with this a couple of days ago. Took me some three weeks to watch it all lol, very addictive.

fav characters:
Michonne, Daryl, Carol, Rick, Carl, Rosita and yes that charming motherfucker Negan.
Jeffrey Dean Morgan plays Negan perfectly. Now this is a formidable foe, not that
unstable Governor bitch.
Glad I started watching this now and not a couple of years ago lol, feel like it might've felt too much like it was dragging in places. Particularly the second season and overall it seems like the
Prison arc
went on for too long, even though I did like it.

CoolwhipSpecial
Posts: 5279
Joined: May 2014
There seems to be no hype whatsoever for Season 7B.

You now what that means... 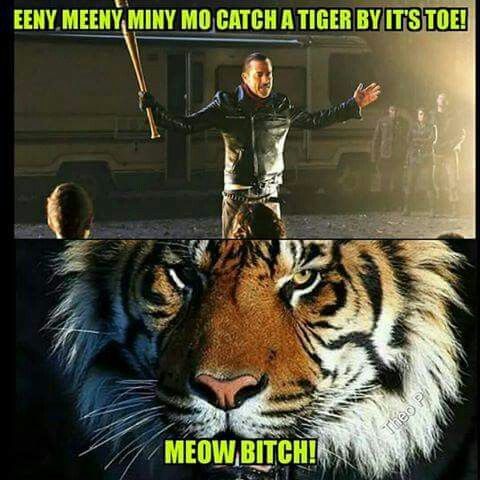