The Haunted Palace (1963)
This film Edgar Alan Poe at the end but is actually based on Lovecraftian horror, which I appreciate. Vincent Price is excellent in this but the character I really felt sorry for was the one played by Debra Paget. The film is mostly atmosphere but occasionally something terrible happens and by the end you want the titular palace to be swallowed by hellfire.

8.5/10
Demoph
Posts: 762
Joined: January 2019
Bad day at Black Rock
I like films about a guilty community refusing to face its crime until a man arrives to confront them. It's a great opportunity for character study, especially when you have Spencer Tracy, Lee Marvin or Robert Ryan as leads. And of course the hidden crime gives way for a powerful and meaningful scene. As western (even if it happens in 1945, it still really feels like a western) about McCarthysm go, I place it above High Noon, that I'm not a big fan of, and it also deals with racism, which wasn't that much of a common theme in films in the fifties, so despite a score by Previn that I think hasn't aged well, it is a quite relevant film.
Also, I'm going to need to watch more films with Walter Brennan, I always enjoy his performances so much, like Thomas Mitchell, Edmond O'Brien, Claude Rains or Andy Devine. I just love how they are always so great in their supporting roles.

enemy was better by a wide margin, it was like a super mellow arthouse twilight zone episode. the double was very broad & surface level
Batfan175
Posts: 4468
Joined: January 2012
The Voices (2015)
I think this might be Ryan Reynold's best role. In this dark comedy horror film, he plays a man named Jerry who works at a bathtub factory and is too shy to ask the "office hottie" Fiona (Gemma Arterton) out on a date, while her friend Lisa (Anna Kendrick) would like to know him better. Every day after work when he gets back home he is greeted by both his dog Bosco and his cat Mr. Whiskers who both talk to him. While Bosco is a good boy and provides care, empathy and a sense of morality, Mr. Whiskers insults Jerry, puts him down and gives him bad advice. Just how bad the viewer discovers as the film goes on and the implications are both incredibly sad, morbidly funny and horrifying, oftentimes all three at once. The trailer makes the film look much more upbeat than it is but there's a twist that makes you revisit previous scenes and consider how different they would play out if seen from a different perspective. The film is rather violent and some elements are really strange but it plays well into the dark sense of humour that Marjane Satrapi (from Persepolis fame) wants to convey. So if you still don't want to watch this film, Mr. Whiskers probably thinks you're a ridiculous peasant.

I would argue this is one of Coppolas worst films.
Batfan175
Posts: 4468
Joined: January 2012
Gambit (1966)
This is such an enjoyable film and while the comedic twists are cool, the characters make this film and there is some real tension at times as well. Caine and McLaine have such good chemistry.

The Italian Job (1969)
While the theme song is quite memorable and the film is funny and has one of the best endings ever, I would say I was less emotionally invested in the Michael Caine character's story because the scheme is just so abstract and it takes a while for things to kick into high gear. I might also say that there is a chase sequence that could have been shorter but overall, it's still quite good.

from Fellini and Bunuel, both very hilarious. if you are looking for a laugh then i highly recommend these two!
Last edited by DUNKIRKIE on October 28th, 2020, 3:34 am, edited 1 time in total.

1. Nomadland 9.5/10
McDormand is even better in this than she is in Three Billboards. There is just no way she doesn't take home another Oscar.

2. I Am Greta (Documentary) 9.3/10
One of only a handful of documentaries that I saw, but it's probably the most important movie of the year. Brilliantly made.

3. Shirley 9/10
Too bad for Elizabeth Moss that Nomadland came out today, or else she might have had a chance at the Oscar. One of the funniest movies I saw, but also both intense and wholesome. Second best cinematography of the week after #4. Also solid soundtrack.

4. Never Gonna Snow Again (Poland) 9/10
There was just something mesmerizing by this movie and it haven't left my brain since I saw it two weeks ago now. Alec Utgoff is brilliant, and the movie looks absolutely stunning.

5. Babyteeth 9/10
Yeah this one is good, guys. Script is solid af. Very funny, and always a pleasure to watch Ben Mendelsohn.

6. Nine Days 8.5/10
If you need just a feel-good, wholesome, heartfelt, chill movie, this is it. Winston Duke and Zazie Beets are both really good in it. The soundtrack is fantastic.

7. Never Rarely Sometimes Always 8.5/10
I can't believe this is Sidney Flanigan's first movie. She absolutely killed it. The most powerful movie I saw. This also better get a writing nomination.

8. First Cow 8/10
This movie is both cute and hillarious. Not much else to say.

9. The World To Come 8/10
Beautifully shot and brilliant acting by Waterson and Kirby.

10. Caught In The Net (Documentary) 8/10
Very well made documentary from the Czech Republic about sexual predators online. Highly recommended, especially the montage where they show every single dickpick they recieved by real predators during filming. It was probably like 30. 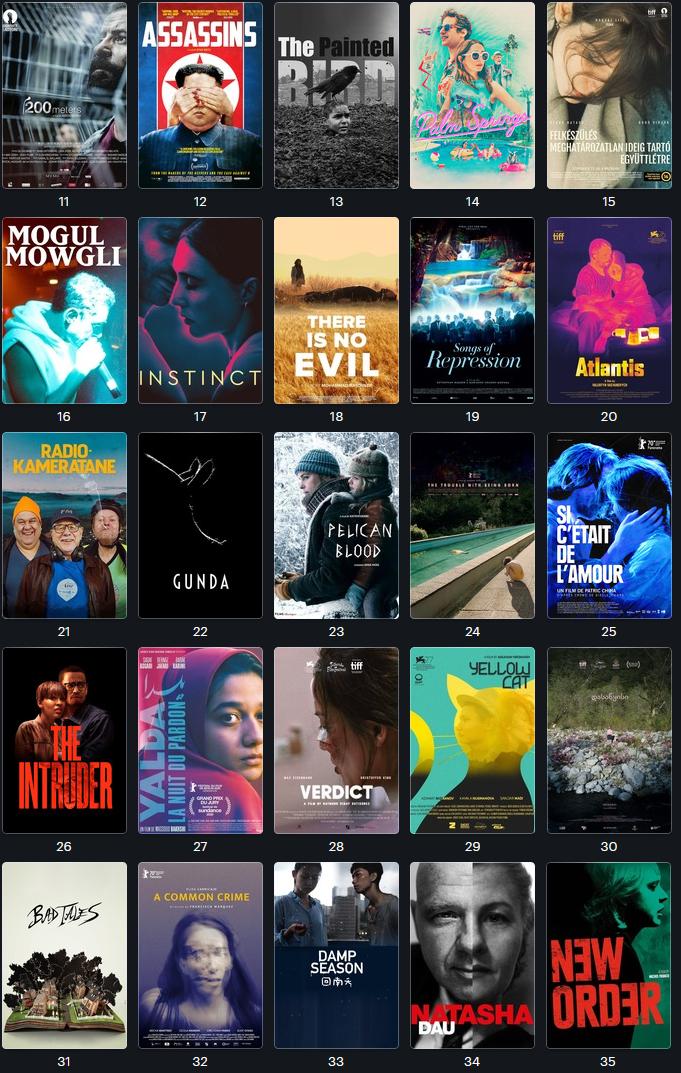 The Matrix Reloaded
Could've done without most of the opening zion scenes. Other than that, it was enjoyable mostly.

I also started watching The Crown. It's the first series I've watched since Lost. I've watched some limited series, but this is the first proper show with multiple seasons. Will watch anything for Debicki, and I've got to prepare!!
Post Reply
4121 posts