This was a neat movie. Audrey Hepburn has so much charm.
Demoph
Posts: 758
Joined: January 2019

This was a neat movie. Audrey Hepburn has so much charm.

One of these films I can just watch anytime and it brings a smile to my face. Hepburn, Grant, Donen and Mancini are all great. The french cop is so funny. Have you seen Two for the road? I would definitely recommend it. Also, around the same time she was shooting Charade, Hepburn shot Paris when it sizzles, which is a "watch it once for Audrey and because Tony Curtis has a nice cameo, then move on" film.

This was a neat movie. Audrey Hepburn has so much charm.

One of these films I can just watch anytime and it brings a smile to my face. Hepburn, Grant, Donen and Mancini are all great. The french cop is so funny. Have you seen Two for the road? I would definitely recommend it. Also, around the same time she was shooting Charade, Hepburn shot Paris when it sizzles, which is a "watch it once for Audrey and because Tony Curtis has a nice cameo, then move on" film.

Will add those to the watch list! Thank you!

Unnecessary, this was most certainly not. The film as a whole might not be as good as 3. But this is a better ending for the series. I think it might be my second favourite.

I’ve seen it three times already. My daughter is in love with the series, lol.

Never thought it was possible for Pixar to continue the golden streak. Such a great film. Forky was such a great addition, dude was making me laugh hella hard.

Nomis
Posts: 18867
Joined: June 2012
Location: stuck in 2020
Two for the Road: This was quite lovely. I must admit it was a bit difficult to get into but once the narrative starts clicking it works. Finney and Hepburn are wonderfully charming in the lead roles. It's a nice story about marriage.

Freier Fall: I really liked this. The romance between the leads felt genuine and I like how the story wrapped up. Quite looking forward to the sequel which is apparently in production.

Black Hawk Down: Has been like, seven years since I first and last saw this? Anyway, fantastically directed by Ridley Scott. There are so many characters, there's so much fighting and still he keeps you invested. It's really nice seeing some young actors whom became big names now (especially Hardy). It's a raw film and it packs a punch.

Cliffhanger: Also been quite a few years since I first and last saw this. It's just so much fun. It starts off pretty strong with that prologue and after a while it becomes one liner after one liner and bizarre twists and action. I love it. Lithgow is pure delight. Beautiful scenery.

Leave No Trace: While I liked the story I thought they could've deepened it out a bit more... Foster is a proper lead, as always and McKenzie is a promising actress. I think the director could've gotten more out of the story though.

From Russia with Love: Seven years since I saw this. Just finished the book before watching it again. It's a pretty damn good adaptation. If there's one thing I wish they included more it's the POV of Romanova. I really like this story, so far it feels like the most unique Bond story and in a way also on film given how focused and how relatively small the scale is. Connery is a fantastic Bond. He and Craig are the best imo. Also Shaw is a great villain in this.

First Man: Still love it. Saw Apollo 11 a couple of days ago and I just had to watch this again. The documentary is powerful and impressive and amazing. Chazelle crafts a great inward look at it with his adaptation. It's a fantastic production all-around with subtle and piercing performances. Superbly made and manages to give me goosebumps at all the right moments. Just like the doc.

Geoffrey
Posts: 510
Joined: July 2017
I recently watched Shutter Island. It's pretty good, but it's not nearly as good as something like The Prestige. It doesn't have the same energy or intensity. Rewatching Shutter Island is far less rewarding too.

I rewatched Spider-Man: Into the Spider-Verse. It's alright, not as good as the first viewing. The third act is extremely weak, as are Spider-Ham and Peni Parker. The movie doesn't seem to understand that in the climactic fight, when everything is insanely over the top then nothing is. Minutes into the fight, the visuals lose all magnificence or grandiosity. They just become noise.

I also saw Night of the Living Dead, a very mediocre movie by today's standards. Nothing special even if its legacy is irrefutable. I'm not going to change my opinion based off the thought that, if I saw it when it first came out, it would blow my mind with its innovations. 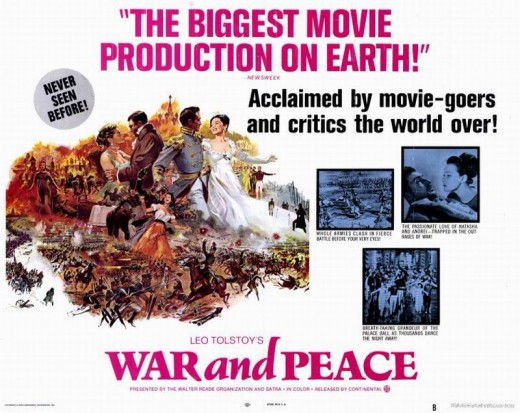 Words like 'epic' and 'amazing' get thrown around rather often nowadays, but this film is truly deserving of both of those words. I saw the new 2K restoration that Janus Films did for this film, which was made in response to King Vidor's 1956 Hollywood version that starred Audrey Hepburn and Henry Fonda. From what I've read, this thing basically had an unlimited budget (some have speculated it would be as much as $700 million in today's dollars) and full support from the Soviet government, and the director (who was also one of the co-stars) was given full access to whatever he wanted in order to make this colossal epic come to fruition. The battle sequences are a sight to behold, with thousands of Russian military members being used as extras to stage the battles at Austerlitz and Borodino, as well as the town that was built for the burning of Moscow in the final chapter of the film. At just over 7 hours, it's a long but rewarding experience that is absolutely worth seeing if it is ever playing in a theater nearby. It's a must see theatrical experience, much like films such as Lawrence of Arabia and 2001: A Space Odyssey. The trailer below gives a glimpse of the film's scale and overall production: