I did not say that the X-Men films that Singer made weren't visually distinct or that they didn't have personality in terms of their aesthetic, just that when you compare how the characters look in those films to how they look in the comics, most of them don't resemble their comicbook counterparts imo because the costumes are a lot more colourful and strange (bright blue, yellow and occasionally bright reds as opposed to dark leather).

In terms of the coherence, this series has so many inconsistencies that they made a entire film just so they could say 'we're not counting this or that thing that does not make sense anymore'. The series is a mess on that level but I think that's why I like it because each film feels like a distinct work of cinema and not just an episode in a really long and expensive tv show on the big screen. 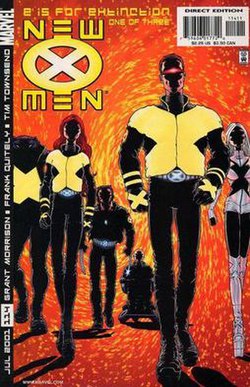 Jax_Teller
Posts: 2845
Joined: January 2013
Location: Hogwarts
I've been told by someone who talked to multiple people (and saw the film themselves) that the current cut is closer to Boone's vision now than it was before, horror was added, the action is bigger, everything is bigger (the budget is 45M by the way, at the very least, last we heard).

And more people have said that the "Fox" ties were indeed cut which is great news because that same person who told me about the screening has been saying for months that Disney is considering adding The New Mutants to the MCU, and since Disney didn't expect how well the screening would go, that it's definitely being considered.

Anyway, very excited to see this, Boone is apparently now happy with the film (and he's now liking IG posts relating to the film which he hadn't done in a while). Also, some reshoots have already happened a while back, we don't know what they are but they were made on the down low and clearly no one knew about it. More are planned in November (presumably, Boone would take a pause from The Stand for 4 weeks of reshoots), depends on whether Disney deems them necessary.

LelekPL
Posts: 2794
Joined: January 2015
Location: Poland
Contact:
Contact LelekPL
Website
Postponed again... in normal circumstances I'd laugh or be mad because I'm still excited for this movie but this time I get it.

Law
Posts: 16793
Joined: July 2010
Location: Moonlight Motel
By the time this gets released the actors will be have forgotten they made it.

They should call in Kevin Feige!

Numbers
Posts: 11256
Joined: December 2011
The right move is to put this on Disney+ (which is stalling due to a lack of new content).
Post Reply
81 posts