Fox has closed a deal with The Fault In Our Stars director Josh Boone to co-write and direct The New Mutants, a standalone spinoff that expands its X-Men movie universe. The series, already part of the X-Men Comics universe, introduces a new crop of mutant characters born with special powers. Boone will co-write with Knate Gwaltney. Simon Kinberg will produce with Lauren Shuler Donner.

It is not surprising that the studio would want Boone to grow into bigger things. He came out of nowhere to direct The Fault in Our Stars, an adaptation of the John Green novel The Fault In Our Stars. The book had a rabid youthful fan base, but Boone showed a strong feel in bringing youthful pathos to the screen, and while Shailene Woodley was already an emerging star, both Ansel Elgort and Nat Wolff broke through as new stars on that film. The result was a $12 million budget Fox 2000 film that grossed $307 million worldwide. Boone became a hot director right away off that success, and among the projects he has been linked to are adaptations of the Stephen King novels The Stand and Lisey’s Story. He’s also been mentioned as one of the directors Marvel and Sony have been sweet on for the live action Spider-Man franchise reboot. Next up for him is The Vampire Chronicles at Universal, a reboot based on the Anne Rice novels that were turned into Interview With The Vampire: The Vampire Chronicles with Tom Cruise and Brad Pitt. The Stand would go after, so The New Mutants is a couple years away.

Fox has done well mining its X-Men franchise. Ryan Reynolds is playing Deadpool with Tim Miller directing, and Bryan Singer is directing X-Men: Apocalypse for 2016. James Mangold and Hugh Jackman are also doing another Wolverine installment with Hugh Jackman. Behind those is Gambit, a movie that has Channing Tatum attached to star. Those are the current X-Men priorities but it is proactive of Fox to keep new films in the pipeline and to reengage Boone, who’s repped by CAA and attorney Gregory Slewett. Gwaltney is also CAA. 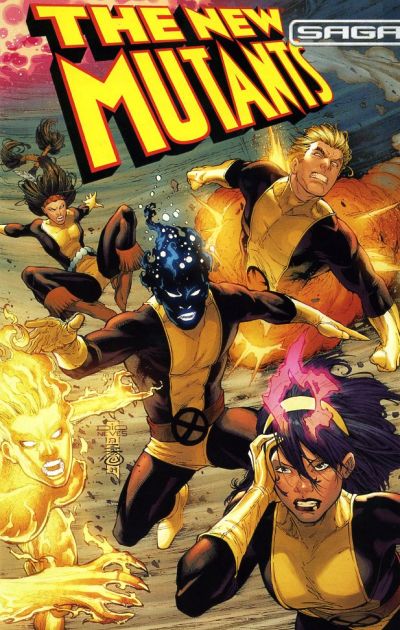 m4st4
Posts: 55221
Joined: May 2010
Location: Jackson County
They can choose numerous team-ups but surely the Apocalypse younglings will be used.

m4st4 wrote:They can choose numerous team-ups but surely the Apocalypse younglings will be used.

However, is this not just going to be a sequel to Apocalypse then?

SilverHeart
Posts: 16716
Joined: March 2012
If they're doing New Mutants I'd be actually surprised if any of the veteran X-Men characters are involved. The whole idea of them is that they aren't the typical X-Men characters.

the_red_ninja
Posts: 10447
Joined: January 2011
Location: Waiting for a train
Contact:
Contact the_red_ninja
Website
They really are taking the long way around to X-Force yo. I'm amped for Boone.

Did a quick wiki search, and we have encountered quite a few of the original New Mutants:
Sunspot
Blink
Warpath
and anyone that lived at the X-mansion.

As for the veterans, Professor X and Magneto train the New Mutants, so I expect a rehashing of First Class.
Or they could lead with Cable training them

I don’t know what the production plan is. Like with all of these things, we have to get the script right. That’s the most important part of it, and they’re just working on the first draft now, but the hope is that we’ll shoot it soon. And Josh has been game with this and gave us this incredibly elaborate presentation about New Mutants. He’s a huge comic book fan and grew up loving and reading specifically New Mutants, so he came with a whole movie presentation where he laid the film out and it was really cool.

Game Of Thrones is going to be one of those pop culture moments that ends up overstuffed with movie stars when we look back at it, and I suspect one of those movie stars is going to be Maisie Williams. She has a compelling combination of maturity and youth, and everyone I’ve talked to about how she is on set seems to be convinced that she’s in this for the long haul.

With her on-screen sister Sansa Stark (Sophie Turner) already joining the X-Men family in this summer’s X-Men: Apocalypse, it makes perfect sense that the X-Men producers would be looking at the show closely. Now comes word that The Fault In Our Stars director Josh Boone, currently co-writing the film with Knate Gwaltney, has set his first three cast members for The New Mutants, which is my personal pick for the “It’s about time!” award when it comes to which of these spin-off properties they decided to develop.

And sure enough, Maisie Williams is attached now as Wolfsbane, better known as Rahne Sinclair. When I was a New Mutants fan during the initial run of the title back in the ‘80s, Rahne was always one of the most emotional parts of the puzzle. She’s a shape-shifter, a wee Scottish werewolf, and her immersion into the world of Xavier’s school was part of what hooked me on the series originally.

It appears that Anya Taylor-Joy, who made such an impression on audiences in The Witch, also made an impression on producers Simon Kinberg and Lauren Shuler-Donner, as she’ll be stepping up to play Illya Rasputin, aka Magik. That’s a great role, and it makes me laugh that you can almost read The Witch as a prequel at that point.

It looks like they’ll also be casting Cannonball, Sunspot, and Mirage, so they really are going for the most traditional version of the team, the first line-up, and that makes me extremely happy. You can expect James McAvoy to play a significant role in the film, which makes sense, and Alexandra Shipp, who plays Storm in this summer’s X-Men: Apocalypse, will make the jump to this team as well.

It’s exciting to see them finally bringing these characters into the world of X-Men, and it makes perfect sense in terms of timing. With Hugh Jackman already announcing that he’s finished playing Wolverine after the release of the upcoming third Wolverine movie, it’s clear that an era has ended, or is ending, and it’s time to start expanding the roster and growing some new movie stars for the series. Williams and Taylor-Joy are both exciting young actors who have been doing strong and interesting work already, and this should launch them into a whole different level of public awareness.