ArmandFancypants wrote:The deliberate withholding of information, with the promise that tune into the sequels to find out stuff!

Yeah that annoyed me too, I really don't like the way it ended. That said, somebody could easily argue Empire did the same thing and few hold it against it.

Empire ends with a piece of work for the heroes to do, and yes a question left unanswered as you've been given two conflicting pieces of information. Not quite Awakens' "a good question... for another time!".

It might have been acceptable if there was any kind of infrastructure to the film but there isn't. What you're left with is what I would call an absolute masterstroke, perhaps THE masterstroke of work by Nina Gold, which is saying something. I exalt her (and Abrams in that capacity) beyond all measure.

So, leaving unanswered questions is nothing new in the SW universe and I think it's a part of it's charm. I do think that the original trilogy did a better job with it, because in TFA the characters don't seem to be "complete" due to the mysteries (Mary Sue Rey, Emo Kylo Ren, etc.), whereas that wasn't the case in any of the films of the original trilogy after you've seen them. But again, it's nothing new. It's just executed more sloppily.

ArmandFancypants
Posts: 9842
Joined: October 2011
Location: Foot of Mt. Belzoni
The film answers the "There is another" when Leia hears the call with the Force theme overlaid. Fairly explicit.

LelekPL
Posts: 2924
Joined: January 2015
Location: Poland
Contact:
Contact LelekPL
Website
Not necessarily. People could have assumed it was Luke's powers that communicated the message to Leia. There were people who thought that Han would be the other Jedi back in the day. It was still left as a mystery.
Batfan175
Posts: 4371
Joined: January 2012
My ideal Star Wars film might focus on members of the ancient species of the Sith on Korriban and how they came to be convinced that the Dark Jedi who left the Old Republic were gods they started to worship or something else from the expanded universe that has no bearing on the fight of the Rebels against the Empire for once. I think depicting alien societies like the Chiss or Anzati as main characters might be nice for a change because so far the only protagonists in the main Star Wars films have been human (the Ewok specials don't count) and that feels kind of limiting. Make me believe that there are hundreds of different stories to tell in this universe. Maybe have a Twi'lek main character or something like that because I think mixing it up a little or presenting weird and unconventional stories in a 'boundless' universe of a galaxy far far away does not have to be a bad thing.
Last edited by Batfan175 on December 19th, 2016, 10:29 am, edited 1 time in total.

LelekPL wrote:Not necessarily. People could have assumed it was Luke's powers that communicated the message to Leia. There were people who thought that Han would be the other Jedi back in the day. It was still left as a mystery.

That's fine if people want to ignore the visual and musical language of the film; it's a long way away from, say, the "Force-back" gibberish.

Crazy Eight
Posts: 13943
Joined: June 2009
Location: La La Land
I'm always baffled when people are bothered by Maz's line. Like, the "question" being asked is of trivial importance and she treats it as such.

In general toward Armand's point, I think you need to contextualize the world this trilogy is being made in compared to the originals. Speculative mystery is the hook for people these days. In a world of online discussion, it's the fuel that keeps the fire burning between installments. There's dozens and dozens and dozens of $150 million dollar spectacles coming out between now and VIII, and what keeps the normies interested is speculation and mystery (and fundamentals like caring about the characters, obviously). This wasn't so in the 70's and 80's. In 1980 ESB was the only big spectacle of the year; literally every blockbuster in the top 10 of 2015 was a huge spectacle. I personally love theorizing with people about Rey's lineage or the specifics or Ren's turn or how the politics will unfold in VIII.

Nomis
Posts: 18497
Joined: June 2012
Location: a twilight world
What's there to discuss about Rey's lineage. Luke is obvs her dad. But we'll find out for 100% sure in EpVIII

Nomis wrote:What's there to discuss about Rey's lineage. Luke is obvs her dad. But we'll find out for 100% sure in EpVIII

I know you keep repeating this, but The Force Awakens wouldn't make much sense if that's the case. 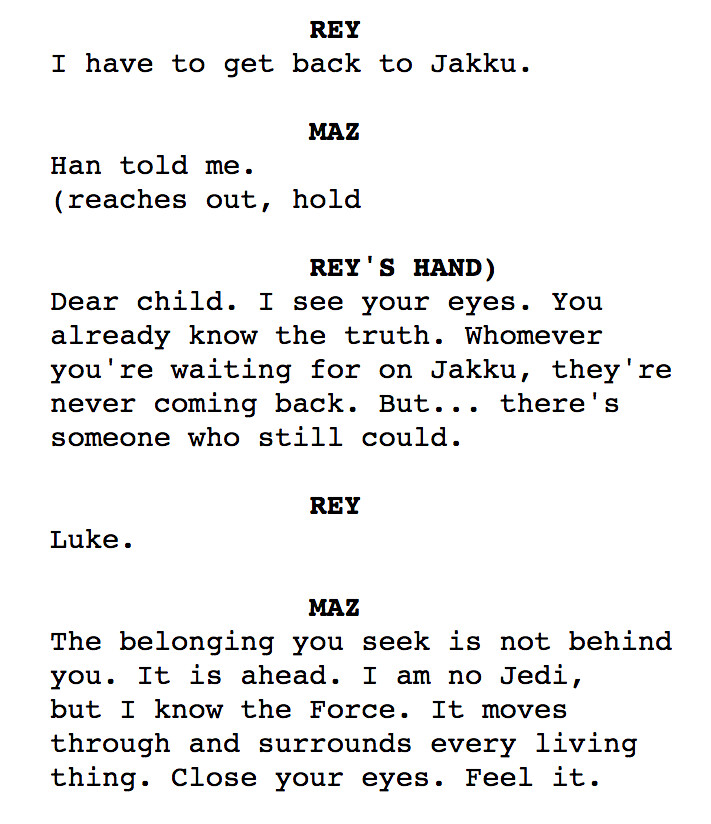 Nomis wrote:What's there to discuss about Rey's lineage. Luke is obvs her dad. But we'll find out for 100% sure in EpVIII