The one that aged the worst is... The Force Awakens. i really didn't care for the characters that much this time around. They were kind of annoying to be honest. Rey is clearly a Mary Sue now when I watch this film. Finn is so incredibly incompetent and basically a comic relief with a great idea for a character arc but a poor execution. Poe is still cool... but still completely underused. If episode VIII can fix some of the character problems (explain how Rey knows all this shit, make Finn do something properly and not just be there to make the female character look better, and give more screen time to Poe) I might come back to it with as much enthusiasm as I had the first time I watched it. But so far, the saving grace is basically Han and Chewie. And Kylo and Hux from the new characters.

The one that made me stop and rethink the most was Attack of the Clones. They had a pretty good film on their hands. But Hayden failed them miserably. If only he had been a completely sympathetic character for the most part of the film. If he was fun, enthusiastic and not an angsty teen, his turn would have been much better. They could have kept his mother's death and his turn the same way. But it would have been a 1000% more impactful had he been a true likable hero by that point.

I hate to come down on him so much, and I never have in the past. But he is just terrible in that beginning.

And to clarify, Rogue One is very good.

Crazy Eight
Posts: 13943
Joined: June 2009
Location: La La Land
After one viewing of Rogue One. Seeing it again tonight, but I'd be very surprised if this changes, even if I should like it more. 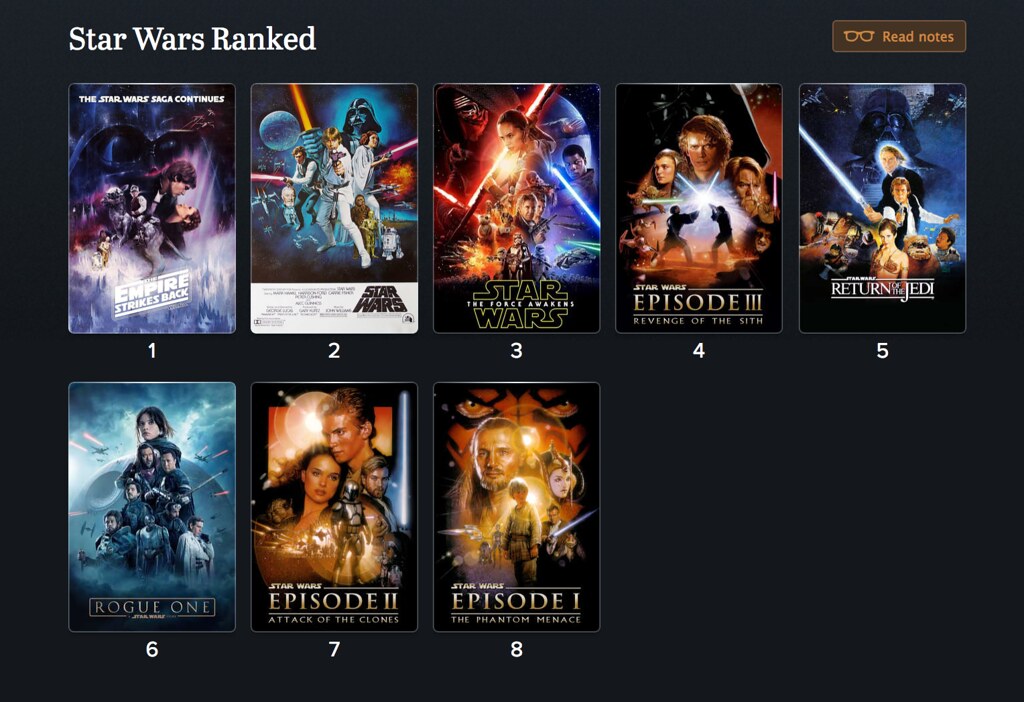 Nomis
Posts: 18496
Joined: June 2012
Location: a twilight world
Hey that's quite a good line-up. I might switch R1 and EpII tho

Now that's some sensible speculation yo.


Here I was "hoping" that any R1 characters to cross paths with Han and Lando in their spin-off film.