The pilot, I think?

Just the pilot, for now. If it gets picked up, his wife'll serve as showrunner. Though I do think they'll co-write majority of the season (like Benioff & Weiss, and Lindelof do for GoT & Leftovers, respectively). By having Lisa incharge, he can still focus on his first baby in Person of Interest.

Casting call for a sequence in Utah which they're gonna film next month. Sounds cool.

SilverHeart
Posts: 16716
Joined: March 2012
With a cast like this I'd be surprised if it at least wasn't picked up for a first season.

I'll be depressed if this show is not picked up for series.

I'll be depressed if this show is not picked up for series.

Was a bit surprised myself at how fast it concluded. Thought Ogg was just referring to his portion, but evidently it is the whole thing, if you go by these posts from one of the actors & a set production assistant:

ChrisTilford
Posts: 2846
Joined: May 2013
Been some slight discrepancy as to the concluding date of production. This shot was taken on September 19, their last day at the Sorel Ranch in Moab, Utah. 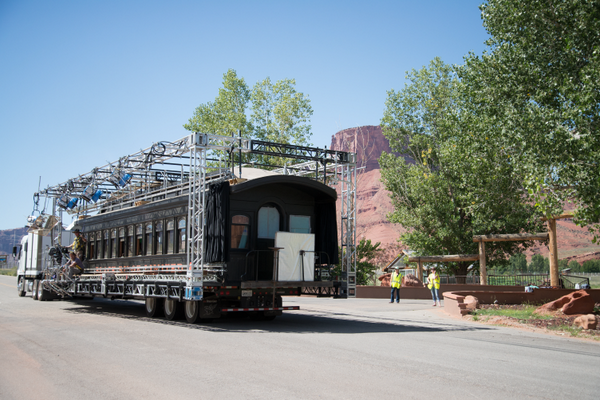 ChrisTilford
Posts: 2846
Joined: May 2013
James Marsden sounds off a bit on the pilot.


What attracted you to the HBO series Westworld, and what did Jonah Nolan say that sold you on it?

MARSDEN: Well, I was one of the last people to be cast in that, and I looked at these crazy marquee names involved. I’ll be honest with you, I read the script and that’s what made me fired up, and I really wanted to pursue it. So, I was thrilled that he was interested in me for that role. It’s just a high-caliber, incredible group of people, all around, from the actors to the DP to Jonah and Lisa [Joy]. It’s something really special. I haven’t seen it, but I’ve seen four minutes of footage cut together into the sizzle real, and it’s pretty special. I hope we get to continue making it. Right now, it’s just a pilot. But, it was a pretty special experience. Jonah and I had a long 30- or 40-minute Skype while I was shooting this movie, actually, and he told me his ideas about what he wanted to do with this and where he wanted to take Michael Crichton’s concept. It sounded like a world that I wanted to be in.