m4st4
Posts: 54869
Joined: May 2010
Location: Jackson County
It could've been better edited, yes. Waiting for that final trailer. Spots were awesome though.

Master Virgo
Posts: 12767
Joined: February 2011
I'm going to riot if at the end of the film, Craig doesn't tell Malek

Hey No, time to die.

That’s weird she doesn’t have a billing but it seems she sadly has a small part.

The Boyle script had
(it was in the casting call) a female villain (which none of these Craig films have had, Vesper doesn't count before anyone claims her) and no women in institutional power since Judi Dench's M died. The Wade and Purvis script for Bond 25 was said to be reworking elements from Boyle's script so I just wonder where that went? It seems like Boyle's casting of Saïd Taghmaoui was replaced by Fukunaga's casting of Rami Malek as the male villain. Variety claimed the two new female leads in Fukunaga's movie would 'spend the most amount of time with him on screen. It’s unknown how far along they are in this process.'
The press release to announce Bond 25 mentioned Ana's name first in the new cast and then she doesn't even get poster billing which is weird, even the bit female parts for Berenice Marlohe and Monica Belluci did. It would be unfortunate to repeat that again IMO.

Ana's been promoting the movie quite a bit for someone with no cast billing.

Daniel Craig: “I should always be so lucky to work with a woman like [Ana de Armas]. This is a movie where there’s a lot of **** going on, a lot of big acting, myself very much included, but she shines through because she’s the real deal. She’s got very good comic timing and we’re not offering her a huge part. But she came in and just nailed it. She had very little to go on, the scripts are being rewritten, you’re changing things all the time or throwing them at her, and she’s not fazed by it.” (February 18, 2020)

Other (older) articles w/ Ana:
Bond Women: How Rising Stars Lashana Lynch and Ana de Armas Are Helping Modernize 007
From ‘Knives Out’ to Bond, Ana de Armas is on the rise
All About Ana
How ‘No Time to Die’ could evolve the concept of the 'Bond girl'
Ana de Armas on Shooting a Havana-Set Bond Film in London: "I Wish We Were Actually in Cuba"
'Knives Out' Star Ana de Armas on Declining to Audition and 'Bond' Chemistry with Daniel Craig
Ana de Armas Is Conquering Hollywood in Record Time
'Knives Out' certifies Ana de Armas as a star, just in time for 007 and Marilyn Monroe

Ana de Armas: “I wouldn’t say [Paloma]'s ordinary, because when she needs to perform her job, she does. But [she] is flawed. She says what she feels, she’s nervous, she’s scared. It’s human. When I read it, I was like, ‘Oh, wait — I can be a Bond girl. I’m that. I’m that messy.’ That’s what felt so attractive, on top of what she’s actually doing in the story, which is another step toward giving women a more powerful and strong place in the films.” (November 22, 2019)

Cary Fukunaga: "What are the things the audience expects? Cars, gadgets, fun action scenes. And then who is gonna be the new female that's going to be a friend or enemy? It was very exciting to try to figure out a character [with Ana de Armas's Paloma] that would subvert expectations." (December 4, 2019 - Slide 9)

Cary Fukunaga: "[Paloma] sort of [occupies more of a traditional femme fatale role]. We tried to subvert that as much as possible. The character was there when Phoebe Waller-Bridge came on board. But Phoebe and I spent a lot of time discussing: 'How do you make what people expect out of this iconic Bond character, that we see in these Bond films, surprising but fun, intelligent and a person in their own right?' Ana was someone I wanted to work with for a while. We almost did a project together the year before. So when this was coming about, that character didn’t even exist in earlier drafts. I just texted her. I was like, 'Hey, Ana, do you want to do a cameo?' And basically, I created a character around her, and tried to do something that Ana hadn’t done before." (December 4, 2019)

Cary Fukunaga: “Over the years, you’ve seen a lot of different iterations not only of Bond, but of films that have mimicked it or copied it. So I think the exciting part actually is going to the original source, and being able to play in a sandbox.” “Genres come with tropes and expectations and in the post-modern era, you can deliver exactly what’s expected of the genre, or you can try to twist it in an intelligent way which subverts the genre but still stays faithful to it. So, when you’re drawing from a certain style, you can play with audience expectations while still surprising them — and the nature of creativity is that limitations are often times good things, because when you’re facing the overwhelming vastness of creative potential, to have defined routes to take for a story or style are helpful in determining how far you want to veer from it.” (October 29, 2018)

MagnarTheGreat
Posts: 2328
Joined: April 2011
What do we think of the alleged plot/premise?


"Daniel Craig got Fleabag's Phoebe Waller-Bridge signed on to the Bond 25 film to help make sense of its complicated plot about...genetic engineering.

'The movie's premise is genetic warfare, which is fascinating — but you gotta boil it down and make it accessible,' an executive connected to one of the studios involved in the 007 film told me.

'And that's why Phoebe was hired. She has somehow made sense of it,' I was told.

Barbara Broccoli told me a few weeks back that Craig was insistent that she and Michael G. Wilson sign Waller-Bridge, creator of Fleabag and a writer on the BBC hit Killing Eve.

'There aren't many people in the world bright enough to bring some humour to the topic of genetics and the Human Genome Project,' my studio friend in Los Angeles said.

But the British writer and actress is clearly one of them.

Ms Waller-Bridge has been working with director Cary Joji Fukunaga on the screenplay while Craig has time away from the set to recover from an ankle injury he sustained during filming. 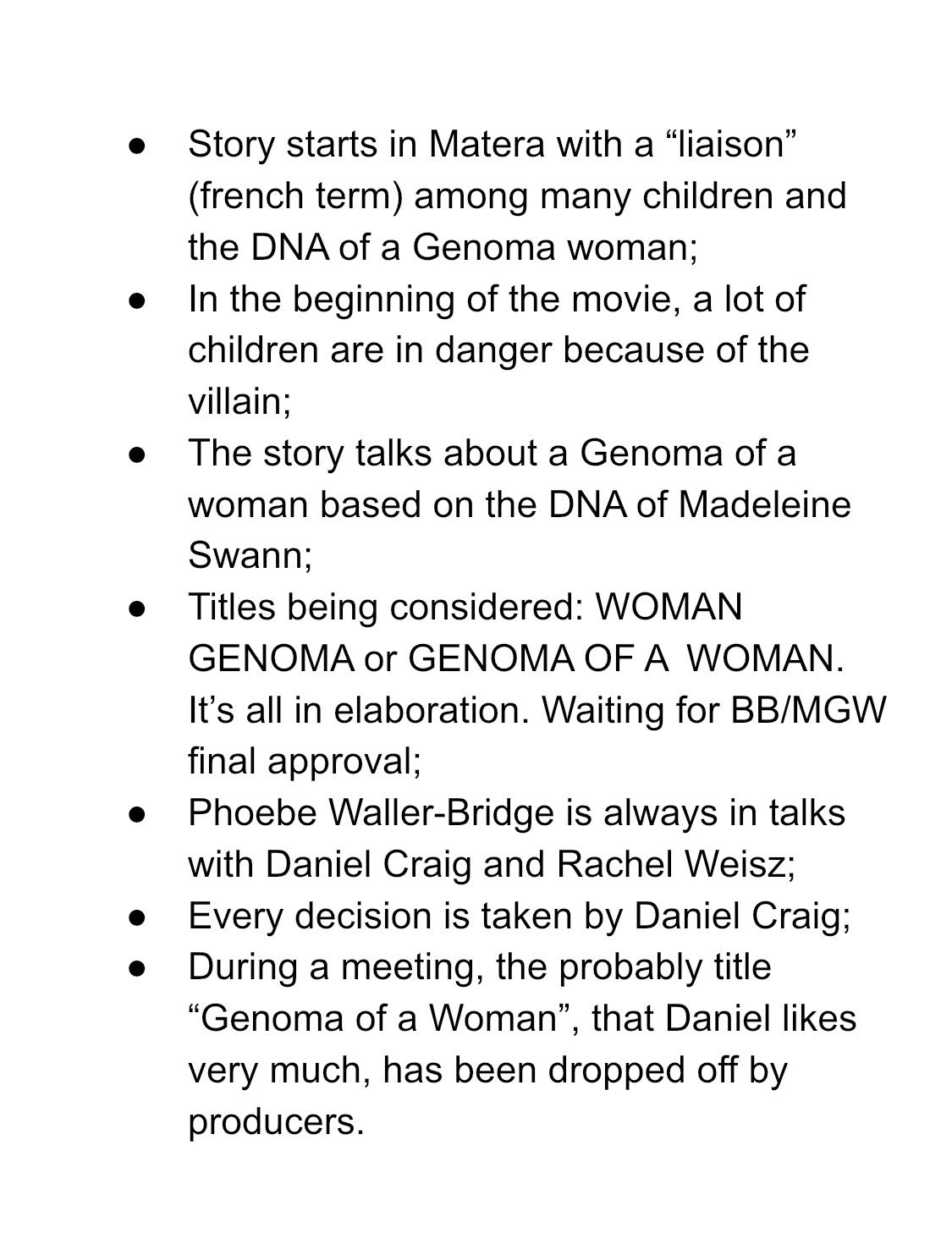 (see this article for what officially has come out about the opening.)

James Bond (trailer): "History isn't kind to men who play God."
Blofeld (trailer): "When [Swann's] secret finds its way out...it'll be the death of him."

Swann being some sort of genetic experiment or genetically modified would be kind of nuts.


THREE SIMPLE SYLLABLES. TWO SIMPLER words. But their cultural significance is huge. We've heard them plenty of times over the years. Sometimes there's a variation on a theme - "Goodbye, Mr. Bond" most often - but the basic gist remains the same. A megalomaniacal villain with designs on taking over the world has lured James Bond, the world's greatest agent, into a trap, and is about to bump him off.

Today, those words are being delivered in Cuba by Christoph Waltz's Ernst Stavro Blofeld, head of evil organization SPECTRE and Bond's adopted brother. Well, not quite. To be completely honest, Empire isn't in Cuba, but a soundstage at Pinewood Studios that's pretending to be Cuba, while outside the October wind rages and howls. And we're not listening to Christoph Waltz, but a member of the production team on No Time To Die, the 25th James Bond movie, repeating lines, for the benefit of the actors, that will later be dubbed by Waltz. With, we fervently hope, a little more feeling than the monotone mumblings currently emanating apologetically from loudspeakers on set.

Anyway, the gist. At some point in No Time To Die, Bond finds himself in Cuba where, along with an associate called Paloma (Ana de Armas), he's wrangled himself an invite to the hottest party of the year - a gathering of SPECTRE's unfinest, the bad and the beautiful, the eye-catching and eye-gouging alike. And as he and Paloma wander around, talking to each other on those little Bluetooth earpieces that come in handy in movies like this, a voice can be heard, broadcasting to the throng.

Blofeld may be in prison in London, but he's still making an appearance of sorts. And two things become rapidly apparent: this is a big old birthday bash for the bloviating bellend. And he's fully aware that Bond has crashed the party. "Enjoy the spectacular end to our pariah," he tells the commingled. And then, those aforementioned words. "Goodbye, James."

What is Blofeld up to? Will Bond survive? And what will be left of him? Empire is not at liberty to say.

ArmandFancypants
Posts: 9836
Joined: October 2011
Location: Foot of Mt. Belzoni
De Armas will obviously be billed in the titles (and it would be surprising to see her on a double-title with Kinnear and Dencik et al), and it is entirely possible that the film billing will not reflect the poster billing, which appears to be more common these days.