I'm pretty content with the first 3 and a little disappointed by the next two. Nomadland took a while to hook me in, at first I found the whole concept a bit out there but it really is more about living with grief than living as a nomad. Malcolm & Marie could have been incredible if it wasn't for all the inside Hollywood meta dialogue about critics and the business as well as a pretty awkwardly cast Zendaya (to her credit, she's still great in the role). When it was about relationship and filmmaking that's when it shined... as well as with beautiful cinematography. And the Batman movie is just a nice lover letter to 70's genre movies: Bond, Blaxploitation and Kung Fu. Letters to Santa is an anthology and some storylines shine while the others... really don't. But my biggest disappointment came from The Little Things. I love mystery crime movies and this one seemed to have everything it needed - a great cast, solid cinematography and music. I didn't even mind it's retreading the ground of Se7en because we haven't had a movie like this in a loooong time... However, the story just wasn't satisfying, the characters developed enough and the ending didn't provide the necessary gut punch it wanted. A shame really.

I also tried watching Minari but didn't find it interesting enough to finish after 25 minutes. The topic just didn't connect with me. I'll probably be watching Judas and the Black Messiah and new Netflix movies: Space Sweepers and Below Zero

Nomis
Posts: 19194
Joined: June 2012
Location: stuck in 2020
Usually it takes months for me to catch up with films released in the previous year let alone see a decent amount of films of the year we live in by that time lol. So far, seen 2 2021 releases lol (the little things and Malcolm & Marie) 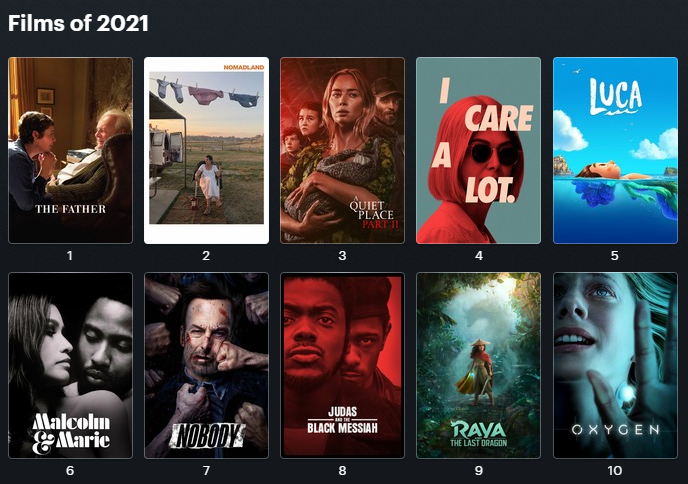 Not a bad start but mostly due to the award movies that came out in 2021. Nomadland and The Father definitely lived up to the hype. A Quiet Place 2 was almost as good as the first one with an astonishingly great opening sequence. I Care a Lot was the biggest pleasant surprise and Luca, although with a message that was uncharacteristically muddled for Pixar, was a charming movie.

I love the comic, it's hands down my favourite Batman story because it captures the most essential elements of the character and the world he inhabits and the movie captures the spirit of the source material perfectly even with all the changes made in adaptation. I think I prefer this to Mask of the Phantasm in terms of animated Batman adventures. The voice acting is stellar (especially for Harvey Dent and the Joker), the art style, while not copying Tim Sale's wonderful drawings, fits perfectly for the mood the film is going for: lots of dread, shadows, silence and ominous foreshadowing and at the centre a murder mystery. This is what many people claim they want to see: a mystery story involving Batman. Well, the World's Greatest Detective has a lot to learn still and gets called out a lot on how much he is NOT a great detective just yet and tbh the stories where Batman is fallible and makes mistakes are the most intriguing to me. What the film lacks in action set pieces, it makes up for with nuanced character work and great atmosphere. Can't wait for Part 2.

RockyBalboa
Posts: 73
Joined: August 2021
Location: The Philadelphia Metropolitan Area
Zack Snyder's Justice League
The Suicide Squad
A Quiet Place Part II
The Tomorrow War
Godzilla vs. Kong
The Conjuring The Devil Made Me Do It
Army of the Dead
The Fear Street Trilogy

Top 10
1) The Mitchells vs. The Machines

3) Those Who Wish Me Dead

4) Raya and the Last Dragon

By tier but in no particular order:
Fear Street Part One: 1994

No Time To Die

The Witcher: Nightmare of the Wolf

The Woman in the Window