Have any personal creations relating to Christopher Nolan and his films? Show it off here.
Post Reply
7 posts • Page 1 of 1
ObserveCreativeSoul
Posts: 41
Joined: September 2017

Greetings, dear Nolan fans and Bat-fans! Long-time admirer here. My name is Yan Eden and I really wanted to share this very personal animated project o'mine with you (it encapsulates my love for the history of the Joker in all mediums, including Heath Ledger's terrific portrayal in The Dark Knight) that includes an original script, great vocal performances from such acting talents as Jay Nelson & Mark Hamill himself (the O.G. Joker from the animated series).

Took me a long time to accomplish it, but it's so worth it - it's about the essence of the Joker and how he transcends our perception of him at one moment in time or another (there's also some stuff about DCEU's recent news and announcements). It's like a classic radio show mixed with beautiful animation mixed with unhealthy doses of insanity and madness. Hope you enjoy it! Have a great day, everyone! Mark Hamill: "@JaredLeto's kind words choked me up! #Thanks"
ObserveCreativeSoul
Posts: 41
Joined: September 2017
Dear Nolan Fans Forum users (new and old, Joker fans, Batman fans, Chris Nolan world of The Dark Knight fans, Batman: The Animated Series fans, DCEU fans, fans of a wide range of mediums), can I ask you all for a simple favor: can more of you, please, spread the word about our Joker project through your online platforms (be it Twitter, Tumblr or whatnot)?

You see, despite all of our hard marketing efforts and promotional attempts (tweets, FB posts, conversations within different communities), it seems to us that a lot of people still haven't seen it, or they prefer to ignore it (like a lot of famous comic book websites, self-appointed afficionados and YouTube brands that are considered to be 'comic book experts' with their predictable green screen schemes and little microphones), or just don't know about the project's existence (which is highly unfortunate, considering how much energy, love, tenderness and passion went into this: mere 1,335 views).

Can some of you, if possible, create a certain presence for this Joker video throughout your friends and other neighbors? If it was not for the quality and for the people involved (myself, Mr. Jay Nelson & Mr. Mark Hamill), I wouldn't utter a single world, but since it's the 21st century that we all live in, I need to make sure that we get heard and seen.

Marketing myself more effectively seems really like a tough nut to crack, you see: I did a lot of promotion on Twitter & Instagram services, and yet, despite all the hard work and a high level of craftsmanship, this video project is not getting enough attention as it should. After 9 days of constant promotion and big marketing push, my current result is still only some mere 1,335 views. In the old YouTube days, that could've been considered as a small victory of sorts, but now, we live in a very different age, where it's mostly about provocation and other wild things that are way beyond my understanding.

Which is really sad, because I feel that this project in particular deserves more appreciation (with all of our production values involved), more attention and more coverage from a lot of other comic book websites, but, apparently they do not think the same way and see our efforts as something that has to do with competition, not partnership and a mutual understanding.

You type down the Joker on YouTube and, unfortunately, the first bunch of videos that you are going to get is a loooooooot of lazy people with zero intelligent opinions, creative efforts and thoughts, simple yapping into their microphones and other devices about this and that with their green screens supporting them and lack of camera movements intact. It's insane, really. I think the fact that I am not a brand and don't have a producer behind me (like Collider, for example) seriously affects the way my video project is being promoted, and despite all of my honest efforts and positive approach towards every single viewer and reader that I have a chance to encounter, it's still feels like a war that is far from being truly over (especially with recent changes that happened on YouTube)...

And Patreon... I just cannot do it. I cannot ask people to support me for a fixed price (seems rather strange to do it) or feel like I was forced to do the whole loan-taking thing and then when my product will be finally released, people will ask for their money back.

The thing about FB is: for example, you spread the word, you let them know you are ready for an intelligent discussion, you hope that amongst 30000 members of one community (just for the sake of it), at least half of them are going to interact with you and let you know what they thought about your latest work, but instead, all that you get is some 5-7 likes at best, which brings into question the rest 20000 + something members that are occupying the group's space.

I am telling you, as a former journalist myself, seeing how everything has transformed over thee last couple of years and became all about brand-marketing and personality-advertising, instead of concentrating on the quality of the released product itself, is very mind-boggling. Then again, Miller's Death of a Salesman never stopped being relevant, so you have to also take that into a consideration.

Thing is, there's just too much competition on the market right now, and that very competition with its' sponsors, advertisers and business partners makes sure to keep certain young, up-and-coming representatives (new blood), like myself, away from the public eye with their own overload of senseless and primitive content that throughout the years became the norm for 99% of the online crowd.

Therefore, I would really appreciate all the support and help at this point. Thank you in advance!

Best wishes,
Yan Eden!
ObserveCreativeSoul
Posts: 41
Joined: September 2017
Ladies and Gents! We (myself & Mr. Jay Nelson, my amazing Joker from the "The Joker TV Special" on YouTube and a highly talented actor from Australia) finally did it!

Mr. Mark Hamill put an endorsement for our finalized Joker video project with his love sign icon on Twitter: 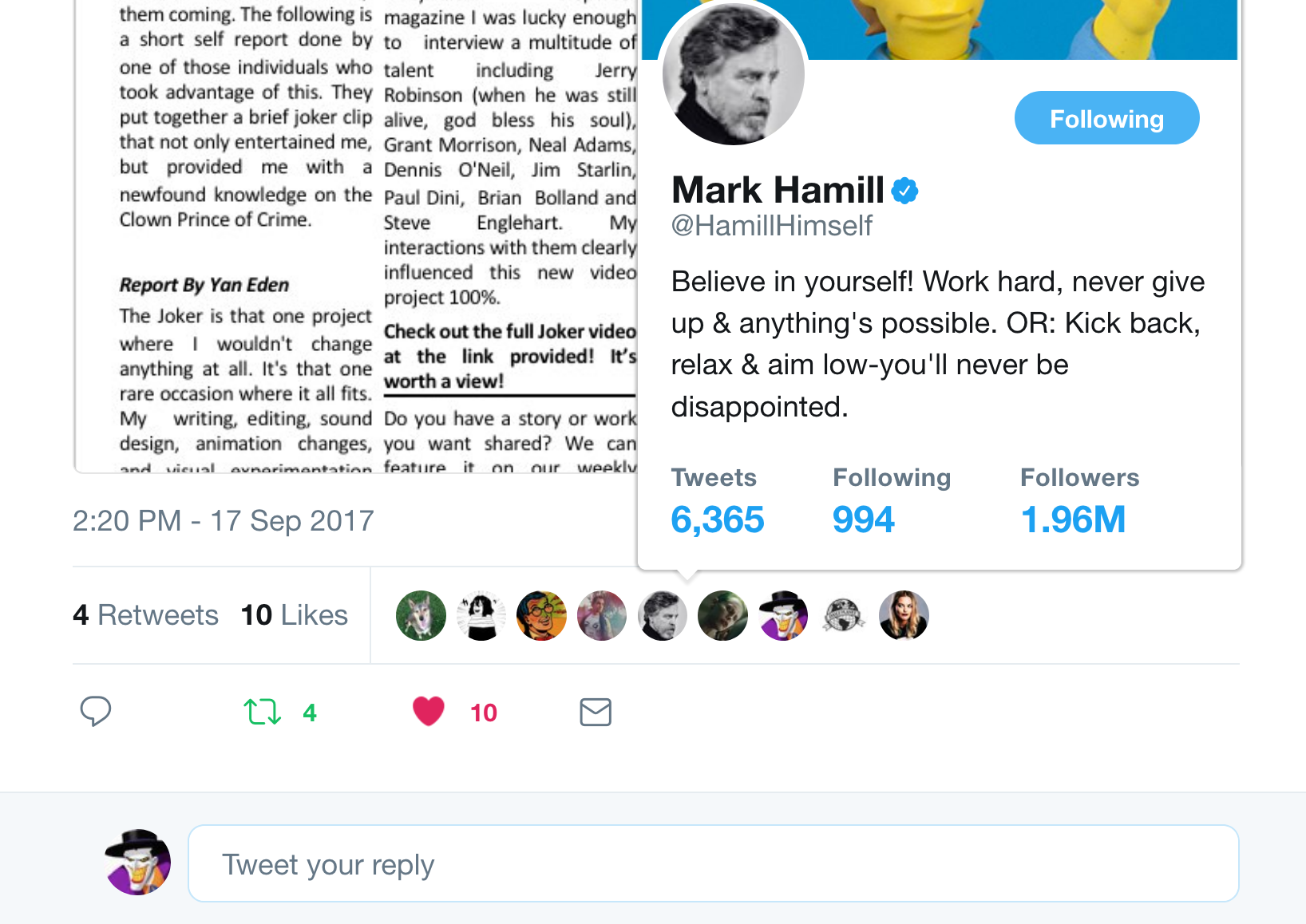 Original link! = https://twitter.com/DailyPlanetDC/statu ... 7657418754 (thanks to a fantastic viral promotion & priceless help of @DailyPlanetDC on Twitter)

Like Mr. Hamill once stated: "Believe in yourself! Work hard, never give up & anything's possible." Please make sure to share our Joker video project with your fellow comic book friends and colleagues, so we could bring more joy into the hearts of other fans of Batman, Joker and DC Comics!!!

Have a lovely day everyone!

In other amazing news, Mr. Jared Leto himself just visited our Twitter page and loved Mr. Mark Hamill's #Respect post (regarding the Joker TV Special discussion that we had on #BatmanDay, featuring Mr. Hamill & Jay Nelson on YouTube: https://www.youtube.com/watch?v=U5dGx7vRtqA )

Since we are receiving so much active support and encouragement for our Joker TV Special, I decided that the time has come to finally share this personal footage of mine with all of you.

It was the first time in my life when I was fortunate enough to meet Mr. Jerry Robinson (January 1, 1922 – December 7, 2011; an American comic book artist known for his work on DC Comics' Batman line of comics during the 1940s. He is also best known as the co-creator of Robin and the Joker and for his work on behalf of creators' rights) and interview him at great length for the Hollywood Reporter Magazine (International Edition) about the origins and the history of the Clown Prince of Crime at San Diego Comic-Con (July, 2011).

His stories were amazing too: he almost met Heath Ledger on the set of The Dark Knight, but the timing wasn't right and then there were some scheduling problems that prevented Heath from meeting Mr. Robinson, which is a shame.

He was very fond of the TAS & 1989 Jokers because they reflected his personal philosophy (flashy personality, fearless gangster, imaginative ways of dealing with his victims, very unusual view of the world) & said that he very much enjoyed the Brave & The Bold cartoon because it was contextually and aesthetically in the same vein as his, Dick Sprang, Curt Swan, Bill Finger and many other classic artists' stories that were published at DC Comics at the time.

As far as I am aware, this was one of the last interviews that Mr. Robinson gave in his life. Unfortunately, Mr. Jerry Robinson passed away on the 7th of December, 2011 (five months after we had our wonderful, in-depth discussion of the Joker and how he was interpreted in a variety of creative mediums).

If you have any Joker/Batman-related questions about our discussion with Mr. Robinson, I'll be more than happy to answer them.
ObserveCreativeSoul
Posts: 41
Joined: September 2017
Just put out a new e-dition with @DailyPlanetDC on Twitter where I talk about meeting and interviewing the legendary Jerry Robinson (Joker’s father) for the first time and where we exchanged various thoughts about the Clown Prince of Crime. 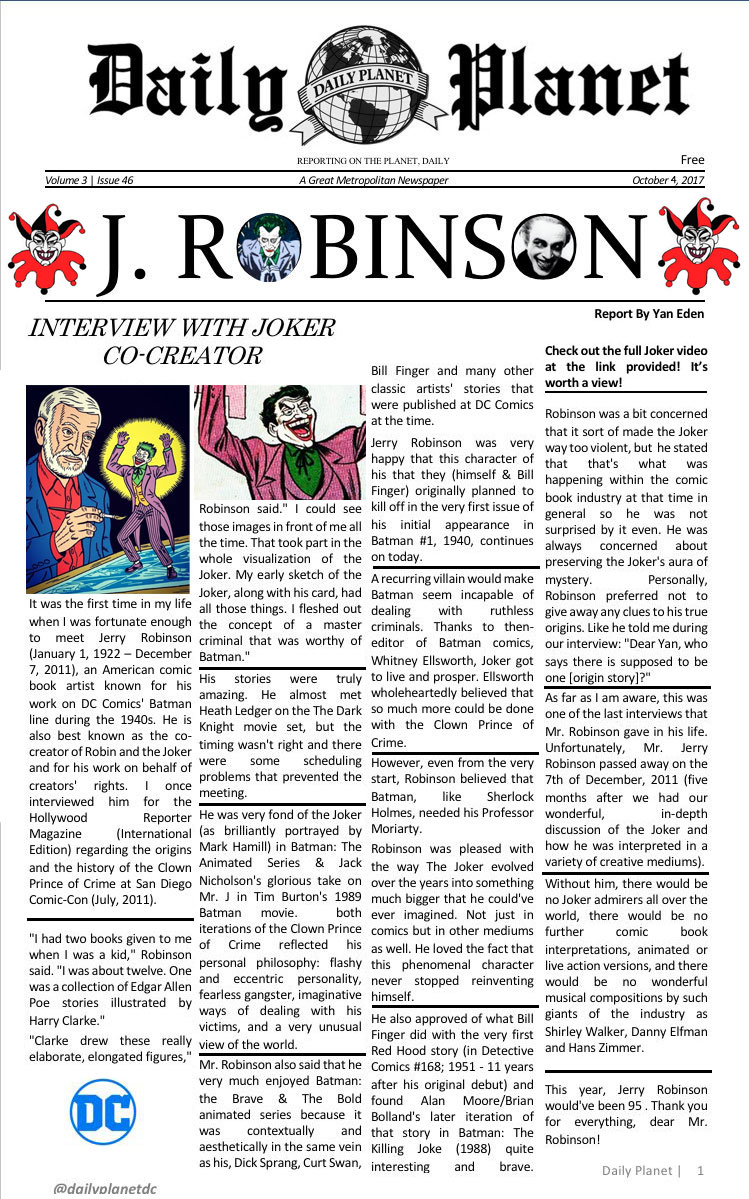