Do you side with one of the characters? - Page 11 - Nolan Fans

Do you side with one of the characters?

The 2006 film about rival magicians desperately trying to learn the secrets of each others tricks.
Post Reply
108 posts
Vignesh
Posts: 5
Joined: August 2014
Location: India
Contact:
Contact Vignesh
Website
I was both Angier and Borden,

I did some bad (very small) things like Angier did to my rivals but they started it like Borden did.

I got hurt like Borden in jail screaming for his daughter, Yeah I experienced that too.

So I was both Borden and angier. After all a good movie should reflect our real life experiences in that way this is the best movie I've ever seen.
moonlight
Posts: 1
Joined: October 2015
While both characters are flawed, I disagree with the majority on here and side with Angier.

He was so friendly and likable at the beginning (which Nolan created purposefully, I know). Then his wife drowns in front of him. Imagine being in his shoes for a minute. That experience would be so traumatizing; it's enough to make anyone go a little crazy.

I'll admit that his obsession with discovering Borden's secret becomes deranged. However, when Angier asks Borden what knot he tied and Borden replies, "I don't know", I was SO infuriated! What a horrible response to give a man who just lost his wife- I don't care that they were twins. I don't think anyone would be satisfied with an answer like that. After that, Angier's character becomes consumed in a competition with his rival and it gets ugly.

Angier puts all his energy in to the competition, but what else is there for him to do? He doesn't have a wife, he doesn't have kids, all he has is "magic" now. He gets selfish, greedy, and a little demented.

I believe his downfall is using Tesla's machine. Tesla asks him if it's worth the cost (the cloning) which was great foreshadowing. Everyone seems to think that him killing his clones is horrible. I think it's a waste of using a clone's potential and also am disgusted with him using the drowning method. But Cutter did tell him "it was like going home", so I don't think he was intentionally trying to hurt the clones, he just cared too much about being the showman for the audience. Also, if he is cloning himself, then isn't he free to do what he wants with his clones?

He thinks he got his true revenge when he shows up as his real Lord self and tells Borden that he framed him and is taking his child away. I don't condone the first part because allowing someone to die for a crime they didn't commit is evil and cowardly. On the other hand, I didn't think it was sad when he took Borden's daughter. First off, she didn't seem sad. Secondly, he was going to take care of her (not harm her), which could have given him a new meaning in his life and she most likely would have been fine. Plus, even is even. Borden took away his love, so he was doing the same. He didn't involve cutter in his framing and I thought that was nice of him. Lastly, he was FINALLY going to destroy the machine and be done with all the madness, but instead he was betrayed by Cutter, who felt betrayed by him, and was killed by Fallon. Angier dying slowly was very sad to watch- atleast Borden's death looked quick.

I do feel bad for Fallon. He was clearly the better half of the duo and he deserved to be reunited with his daughter. At the same time, I think he is the biggest coward! He didn't HAVE to go along with Borden's plan, he could have CHOSEN to tell Sarah the truth, but instead his dishonesty caused her to commit suicide. (Rebecca's acting was superb btw!) Borden and Angier were stupid for letting their competition go so far, but Fallon chose to be Borden's sidekick instead of his own person, which is far from admirable.

Anyway, sorry for this crazy long post! Insomnia is the worst. I definitely understand and respect that others have different opinions than me. To sum up, maybe I liked Angier more because I felt sorry for him and understood how he could turn out the way he did. I also just found his character more interesting, but Borden/Fallon was great too and Christian Bale was phenomenal! So was Hugh Jackman. Nolan picked top notch actors to play the two characters.

sebal24
Posts: 110
Joined: July 2014
I lean on the one who hanged.
MenMaatSet
Posts: 2
Joined: November 2020
Of course I on side of Angier, because he the good person. Angier is defender, victim: borden starts this rivalry, by killing Angier's wife, refusing to answer which knot he tied (thereby he mocked the Angier), broke his leg and publicly humiliated him in the theater.
Everyone betrays Angier - so, he the one, who deserve justice, and he must fulfill his revenge.
I'm sure, in the last scene we have seen alive Angier in the tank, so he eventually win, and complete his revenge behind the credits.
JimZipCode
Posts: 2
Joined: March 2021
A fun question. What's interesting is how terrible ALL of the 3 main male characters are.

When I first fell in love with this movie – my wife & I saw it twice in the theater – I probably most sympathized with "Alfred": the nice twin, the one who loved Sarah.

Angier is thoroughly poisoned by hate and vengeance. He causes every "escalation" in the rivalry between them, eg shooting Borden, kidnapping and burying Fallon, framing Borden for a murder that never happened; trying to steal his daughter. No matter how warm & outgoing he started out in the beginning, by about a third of the way into their story he's hateful and twisted.

"Freddie" – the smart twin, the one who loved Olivia – is pugnacious & arrogant. He causes Julia (Piper Perabo)'s death; then he lies about it to Alfred. (We can infer he lied because Alfred tells Angier that he's asked himself a thousand times which knot he tied, and he doesn't know. If Freddie had come clean, Alfred would know.) Freddie is shitty to Sarah. That's understandable, since he's literally trapped in a marriage to someone he doesn't love; but nevertheless. At one point Alfred has to ask him to make an effort to be nice to Sarah. Freddie's kind of an asshole.

That left Alfred by process of elimination, as the one who's "side" I would be on. He is the warmer of the two twins. He fell in love with Sarah; he was dad to little Jess. He's the "nicest" of the three.

Now it's 15 years since the movie came out. The biggest difference in me personally is that I've been married for a dozen years, and a stepdad & father. On my most recent re-watch of The Prestige, I was struck by the sheer horror of Alfred's treatment of Sarah. She knows! Or rather, she knows something. He acts like two different people. Some days he loves her, some days he does not. Borden is having an affair with his showgirl assistant, and in some ways rubbing it in her face. At the very least, his behavior is psychotic and he's keeping huge secrets from her.

It's even possible that she's figured out the whole thing – possibly seen makeup and other supplies. I go back & forth on whether I think she has or not. There are scenes, late in their marriage, which could be read either way. If she's figured it out, then she's trapped in a marital three-way, and she does NOT like it.

Alfred drives Sarah to suicide. That makes him one of those people who tries to act "nice", but is ultimately as shitty as the worst of the people around him.

All three of these guys are terrible. The swath of destruction they cut thru the ladies around them, including little Jess, is awful. It's possible that "Freddie", the twin who's a bit of an asshole, is the least bad of them. He at least is fairly straightforward. He's driven to be The Best at magic, and that's all he cares about. The damage he does is incidental and accidental.
hanzvel
Posts: 1
Joined: August 2021
What a great movie!!
I am so obsessed with this movie until now that I have made a custom build t shirt of this movie.
Check It out: 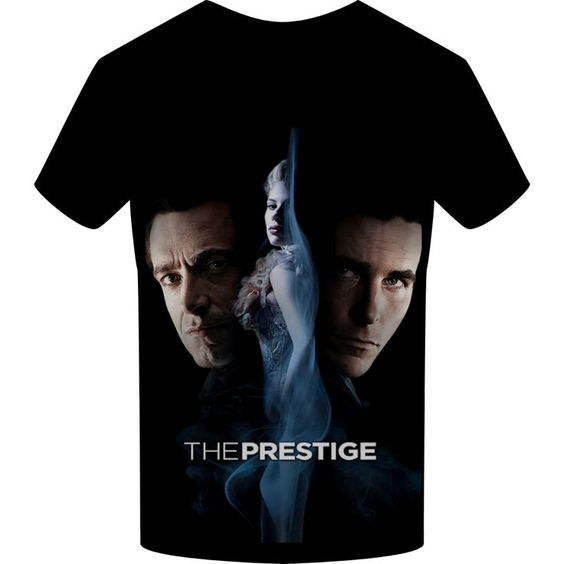 StanisLOVE
Posts: 17
Joined: December 2019
It would be entertaining to find out the political preferenses in addition to siding with the character
Post Reply
108 posts

Return to “The Prestige”