Other filmmakers on Christopher Nolan

The Oscar Nominated writer and director to whom this site is dedicated.
Post Reply
303 posts

Picasso wrote: ↑
November 12th, 2018, 11:27 am
Andrei Tarkovsky: "2001 is bullshit, on the other hand, Interstellar is a true piece of art, actually poetic. Those 15 minutes in the teseract are the best thing made in cinema since my last film, The Sacrifice".

Is this from his recent interview with Playboy Germany? 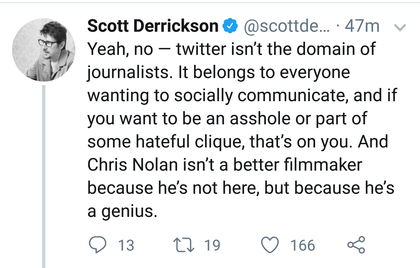 "Christopher Nolan asked when you're going to come back from the dark side and start shooting on celluloid."

"When he starts writing scripts in pencil."

Our Q&A with Steven Soderbergh is heating up! #HighFlyingBird

DEADLINE: How often have you taken a leap on talent like that at nascent stage?

SODERBERGH: Here and there. Every situation is different. When Chris Nolan became interested in Insomnia and word got back to me from Dan Aloni that he couldn’t get a meeting at Warner Brothers, and that they wouldn’t meet with him to talk about it, I said that’s ridiculous. I called the person who wouldn’t meet with him and said you need to sit down with this guy. Whether it’s this project or something else, you need to meet this guy. You need to talk to him. Turns out he has the meeting, and it was a total love fest. He goes and makes Insomnia and begins his relationship with Warner Brothers. So the only thing I did was get him in the room.

DEADLINE: You based that on Memento?

DEADLINE: So to you, it was just, what’s the problem?

SODERBERGH: This is a no-brainer. This guy’s ridiculously talented. Why wouldn’t you want to meet with him? That was certainly my sensation when I saw Memento, for instance, and I saw it because again Dan Aloni called me and said will you do me a favor? I’ve got this movie made by this client. It’s done the festival circuit. People seem to really like it a lot. It’s gotten great press and nobody will buy it. We can’t get a distributor. Will you watch this thing and tell me, have people just been gas-lighting us? I watched the movie in a screening room alone. My first reaction was one of real depression, because I thought if that can’t get a distributor then what is happening in this business? What ended up happening is the chief financier, Newmarket ended up forming their own distribution company and the movie made 25 million dollars here. So it ended up being a success story. But I was sort of having two reactions at once. Why won’t anybody buy this movie, and, there’s a new kid in town. This is like an incredible showcase for someone who we’re now going to know who Christopher Nolan is.

I love the idea that whenever we’re bitching and moaning about some aspect of the business, unbeknownst to us somebody somewhere is working on something that in like six months is going to blow us away, and we have no awareness of. I love that. It always happens.

Is there any reliable old technology that you use to make films now?

Interesting. There’s nothing we use now that I used when I started. Nothing. There’s photochemistry, which to me is obsolete. Mechanical movement is the same. As gorgeous as the Panaflex camera was – and it was a beautiful machine – it’s obsolete. Digital camera technology is so advanced now that I wouldn’t ever dream of going back to one of those old cameras. Large-scale physical miniatures, too, they’re gone. The last time I worked with miniatures was on Titanic. I still have the 42-foot long Titanic model, but it’s like a Model-T Ford. No, maybe something higher, like a Duesenberg or something.

The point is, we wouldn’t do it that way any more. We don’t work that way. We can’t. There’s too much flexibility with CG models. And they don’t degrade. I’m always repairing that damn Titanic. It’s always getting bumped into, railing getting snapped off, dust getting on the deck. We just do physical models, we don’t do matte paintings on glass, we don’t do photochemistry any more. And I think movies look better than they’ve ever looked. I know Chris Nolan disagrees, and he thinks that shooting on 65mm IMAX film is great, but you could achieve the same result digitally if you chose to.