RIFA
Posts: 21411
Joined: June 2010
Location: All-Hail Master Virgo, Censor of NolanFans
With the next article I think it's time we dedicate a special thread to this game since we all know it's going to be pretty huge.

Jorgensen confirmed that the shooter is due to launch before Christmas 2015. More specifically, the game aims to be "aligned with" Star Wars Episode VII -- The Force Awakens, which arrives on December 18, he said.

DICE's new Star Wars: Battlefront is not directly based on the upcoming movie from J.J. Abrams, though it will share some general universe themes, characters, and items. In previous teaser trailers and images, DICE has revealed that the game will take players to locations such as Hoth and Endor, and feature vehicles such as AT-ATs and speeder bikes, among other things.

About the game in general, Jorgensen said DICE will share more about the project in the coming months. He went on to say that Battlefront's launch this year will be a "very large activity" for EA overall, on level with the company's blockbuster Battlefield series.

"We're extremely excited about that," Jorgensen said about Battlefront. "We think there's huge potential for that title. More to come in the next couple of months on that as more about the movie comes out as well as more about our title comes out. You should consider that a very large activity for us [this year] and a very large focus--similar to how we've thought about Battlefields in the past."

Battlefront is not the only new Star Wars game EA is currently working on. The developer's Visceral Games studio is also producing an entry in the series, rumored to be an open-world game. EA has even hired longtime Naughty Dog creative director Amy Hennig to work on the title. 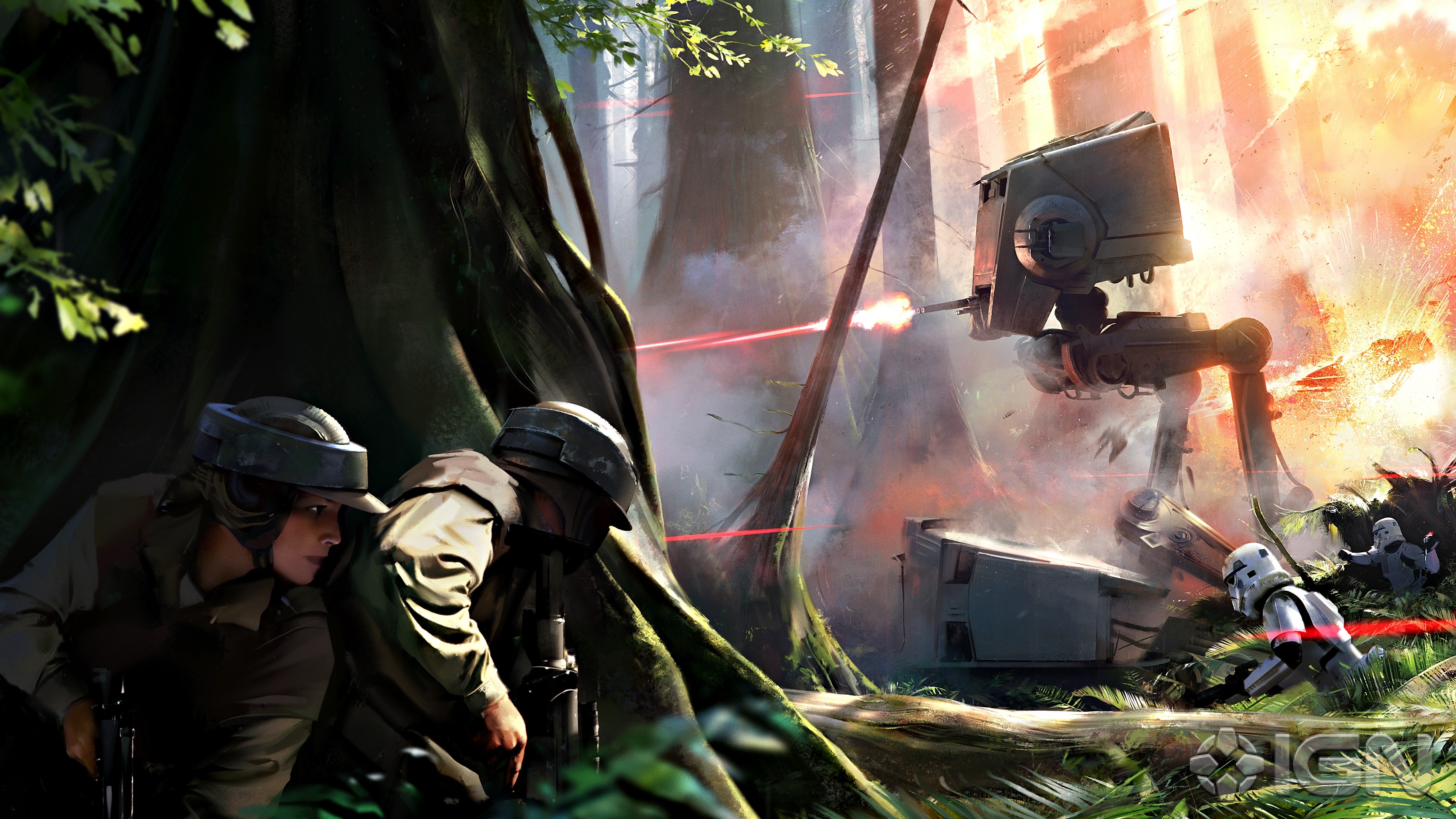 man this is gonna rock

ChristNolan
Posts: 7169
Joined: January 2014
Yep. I've been playing Battlefront II on the PS2 the past couple of days. My childhood was re ignited, it's such a brilliant game.

ArmandFancypants
Posts: 9820
Joined: October 2011
Location: Foot of Mt. Belzoni
I was always more of a Battlefront person (the first one).

I kinda liked that you couldn't play as Jedi and whatnot. And I liked the map design better.

Still, the second one let you assassinate the Whale Rider chick, so there's that.

ArmandFancypants wrote:I was always more of a Battlefront person (the first one).

I kinda liked that you couldn't play as Jedi and whatnot. And I liked the map design better.

Still, the second one let you assassinate the Whale Rider chick, so there's that.

Gaming is for kids.

ArmandFancypants
Posts: 9820
Joined: October 2011
Location: Foot of Mt. Belzoni
And I was one.

Here is a huge Star Wars: Battlefront list of rumors I received last week. This contains a lot of information on the game and how it will interface with Star Wars: The Force Awakens, not to mention the game itself:

The story of Star Wars: Battlefront’s campaign will span pretty much the entire Star Wars saga.
Star Wars Battlefront will feature segments in which you play as both the good guys (Old Republic, Rebellion and Republic) and bad guys (Separatists and the Empire). It was specifically stated that there will be a small portion of prequel trilogy content. You will participate in a couple of battles from the Star Wars: The Clone Wars, and the space battle above Corsucant from the beginning of Revenge of the Sith.
The majority of the campaign will take place during the original trilogy era. All of the battles and settings that you would expect to be there will be playable. It was said that the campaign itself is pretty long when compared to other first person shooters.
There will be some segments of the campaign which take place between Return of the Jedi and The Force Awakens. There won’t be a lot because in their words “Lucasfilm has a lot of plans for that era.”
The last section of the campaign takes place before and during the opening segments of The Force Awakens. Don’t expect anything too revealing, because the game is expected to ship about a month before the movie releases.
For both the Republic (that’s what the good guys are being called in the production here) and Empire sections you will be playing characters that actually appear in The Force Awakens.
EA/DICE was allowed into Pinewood Studios for a few days to scan and capture props, sets, etc for recreation in the game.
At one point either during either the portion between episodes 6 and 7 or the portion from the beginning of The Force Awakens a character with the last name Tarkin appears.
The scale of the multiplayer is going to be absolutely massive with up 64 players participating on each side.
Space to land battles are absolutely happening, but will only be available in certain game modes.
There will be a “hero” system in place, where as you play you accumulate points that you can eventually cash in to play as a “hero” character. These characters are extremely powerful and have abilities that are not available to the normal characters that you play for most of the matches. The system is constantly in flux, but as it is now, pretty much everyone have a chance to play as a hero at least once per match.
The Downloadable Content plan for the game is “extremely aggressive”. Expect up to five DLC packs for the game, with the first coming out before the end of 2015. Each pack will be themed, with the first two or three being exclusively based around content from The Force Awakens.
The game will ship with several The Force Awakens characters already, but some won’t be added until DLC. Specifically all of the characters in the trailers will be available at launch, as will new versions of the X-wing an TIE fighter.
Tons of new ships and vehicles.
The contents of each DLC will contain at least three new maps, new hero characters, and new vehicles/ships.
I saw a character model for the new Stormtroopers, the model for the new X-wings, and some random models of guns, grenades, and other things like that. However, the most interesting thing was a picture of a screen from one of the employee databases.
It was as a checklist that the department heads can go through to see whats been complete, whats been bug tested, etc. It was basically just a black screen with lines and lines of text posts, with comments and suggestions under each post. What was most interesting about this is what was listed. This particular screen I saw was for a listing of maps for the multiplayer mode. There was a lot of stuff that you’d expect to see in a game like this like:

Like I said, nothing major. EXCEPT for this listing that I saw

Now, I know that’s not concrete evidence that the desert planet from The Force Awakens is Tatooine, but I thought it was interesting because I know there was been some debate about that subject.

That is a lot to take in and if the information is accurate, it sounds like a really great experience for Star Wars fans and the links to the new movie sounds pretty good considering how paltry it could be.

darthnazgul
Posts: 7450
Joined: February 2012
I feel like if it's coming a month before The Force Awakens, we'd have seen some gameplay or trailer by now.
Post Reply
506 posts