Even if Shane Black were to never write another script again, he will always be one of my favorite Hollywood writers. From the late 80s to the mid-90s, nobody scripted better action than Black, producing films like Lethal Weapon, The Last Boy Scout and The Long Kiss Goodnight. Also not to be ignored is the insanely amazing and criminally under-seen Kiss Kiss Bang Bang, which Black both wrote and directed in 2005. Since then, however, he has been a ghost, writing a short film called A.W.O.L. back in 2006 under the pen name Holly Martins (taken from Carol Reed's The Third Man), but not making any features. Lucky for us, that changes today.

Deadline reports that Shane Black has signed on to direct a live-action adaptation of the Japanese manga Death Note. The writer/director will also oversee the script being written by Anthony Bagarozzi and Charles Mondry, who also worked on Black's adaptation of Doc Savage (which apparently still a project in development over at Sony). In the story, a character named Light comes across a mystical notebook that has the power to kill anybody whose name has been written on its pages. Light chooses to use the tool for good and becomes a vigilante trying to rid the streets of crime. His actions quickly catch the attention of a FBI criminal profiler known only as L who begins to hunt him down. Speaking about the project, Black said, "What we want to do is take it back to that manga, and make it closer to what is so complex and truthful about the spirituality of the story, versus taking the concept and trying to copy it as an American thriller."

I can't recall ever reading a single page in a manga book in my life, but I'm already in love with this idea. Hell, my mouth gaped when I learned this past weekend that Shane Black helped Evan Goldberg and Seth Rogen while they were working on The Green Hornet. This is very exciting news and let's hope that it's only the beginning of a new work cycle for the greatest Hollywood action writer.

I've read the manga, and its pretty good. I just hope that Shane Black respects the material and doesn't Americanize it. D: 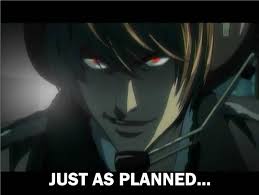 But in all seriousness, I really enjoyed the story of Death Note and hopefully it wont be a disaster.
chee
Posts: 13622
Joined: June 2009
Location: Florida
Contact:
Contact chee
Website

But in all seriousness, I really enjoyed the story of Death Note and hopefully it wont be a disaster.

Hopefully it won't be as bad as the anime.

chee wrote:Hopefully it won't be as bad as the anime.

WHY POTATO CHIP. WHY.

ngl, that still makes me laugh (admit it, after you saw that scene the first thing you wanted to do was find a potato chip and eat it)
chee
Posts: 13622
Joined: June 2009
Location: Florida
Contact:
Contact chee
Website
Well, I hate potato chips soooo...

Master Virgo
Posts: 12629
Joined: February 2011
It's really old news but apparently the movie is set to be made after Iron Man 3.


Shane Black (Kiss Kiss, Bang Bang) has signed on to helm an adaptation of the Japanese manga Death Note for Warner Bros. Deadline reports that Black, who was once one of Hollywood’s highest-paid screenwriters (and rightly so), will oversee a script written by Anthony Bagarozzi and Charles Mondry. Bagarozzi and Mondry are also writing the script for Black’s adaptation of Doc Savage for Sony. Black says he’s uncertain about which project he’ll do next.

And here’s what Black told Deadline about the project:

“It’s my favorite manga, I was just struck by its unique and brilliant sensibility. What we want to do is take it back to that manga, and make it closer to what is so complex and truthful about the spirituality of the story, versus taking the concept and trying to copy it as an American thriller.”

While the project has been in the works for quite some time, Black shed some light as to why the Japanese manga/anime had not been given the green light. He detailed a struggle with Hollywood studios who wanted to soften the story and give it more mass appeal by removing elements from the original story.

Chiefly, studios wanted to remove the Shinigami (Gods of Death) and give the main character, Yagami Light, a backstory on how he became the story's villain. The backstory would focus on how his friend was murdered when he was young, and that the rage drove him to strike back once the Death Note notebook fell into his possession.

Black adamantly opposed such changes and said that the Gods of Death are still in his script and the formulaic backstory will not be in his version. He gave no target date as to when he hopes to start shooting, only stating that the movie is back on track.3

That is weird.
FirelordSylar
Posts: 446
Joined: June 2010
Interesting that Black fought to keep the original story with the Shinigami. Death Note could translate well, so let's hope he pulls it off....If it ever gets made...and that's a big if.
chee
Posts: 13622
Joined: June 2009
Location: Florida
Contact:
Contact chee
Website

and make it closer to what is so complex and truthful about the spirituality of the story, versus taking the concept and trying to copy it as an American thriller.