All non-Nolan related film, tv, and streaming discussions.
Post Reply
287 posts
darthnazgul
Posts: 7450
Joined: February 2012
"When I saw that Part 5 announcement, with a fall release date displayed. . . how do I say this?

As excited as I am for Vento Aureo, there's something else that I've really gotten into lately, My Hero Academia.

The first two episodes of season one were enough to hook me, but these last few episodes in particular have just been spectacular.
darthnazgul
Posts: 7450
Joined: February 2012

The JoJo greatness is back. Two episodes into Part 5 and it's already a Gold Experience. Weird ending song choice though.

Vader182
Posts: 19012
Joined: June 2010
Location: The White City
Contact:
Contact Vader182
Website AOL
If anyone hasn't seen Neon Genesis Evangelion, one of the greatest ever pieces of narrative art, is on Netflix.

Watch it in the Japanese, not the new dub.

You're welcome for changing your life.

Disney+'s solo2001
Posts: 16635
Joined: August 2010
Contact:
Contact Disney+'s solo2001
Website
i've been watching it the past few days and i keep being shocked by how packed with details and ideas it is. and it has the best visuals of like any animated thing i've seen. also i love how it just /starts/ without any origin nonsense. it's all very refreshing
taopaipai
Posts: 146
Joined: July 2011
Don't forget the two movies after the end of the series. Death & Rebirth and End of Evangelion.

Disney+'s solo2001 wrote: ↑
June 27th, 2019, 12:02 am
i've been watching it the past few days and i keep being shocked by how packed with details and ideas it is. and it has the best visuals of like any animated thing i've seen. also i love how it just /starts/ without any origin nonsense. it's all very refreshing

Better than Akira or any studio Ghibli movie?

Disney+'s solo2001
Posts: 16635
Joined: August 2010
Contact:
Contact Disney+'s solo2001
Website
i'm only a few eps in will report back soon
Batfan175
Posts: 4211
Joined: January 2012
I have been watching Harlock, Wolf's Rain and Cowboy Bebop recently. Lots of great stuff to enjoy there. I was sadly not able to find a Neon Genesis Evangelion DVD yesterday but I'll keep an eye out. I hear the current Netflix translation/subs are terrible so I'll stay away from that I think. 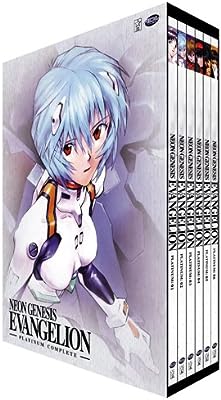 I have had the Platinum collection of NGE on DVD along with the End of Eva movie for a very long time with the old dub. End of Evangelion is a great movie considered as a capstone on the series, but I could never say start there as it's not a great standalone movie...like telling someone new to the MCU to start by watching Avengers: Endgame. In that respect the Ghibli movies and others (Satoshi Kon movies, etc.) are better because they're not dependent upon other material. Also if anyone likes NGE, there's a similar but different show out there from 2002 named RahXephon that may be worth looking into.
Batfan175
Posts: 4211
Joined: January 2012
The only thing I heard about the show is that it features robots fighting monsters, Shinji is the protagonist and has an abusive father and that Asuka is kinda mean.

On a different note, I recently saw DVDs of Lady Oscar and Revolutionary Girl Utena. I remember watching one or two episodes of the former as a kid, while the latter I have heard good things about so I'm rather tempted to dive into the story.
Last edited by Nomis on July 5th, 2019, 8:14 am, edited 1 time in total.
Reason: unnecessary quoting
Post Reply
287 posts